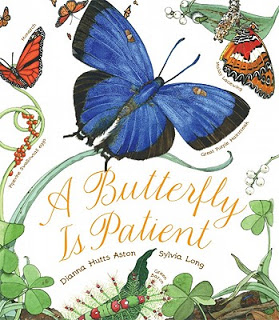 The creators of the award-winning An Egg Is Quiet (2006) and A Seed Is Sleepy (2007) have teamed up again to create A Butterfly is Patient (2011), a gorgeous and informative introduction to the world of butterflies.


From iridescent blue swallowtails and brilliant orange monarchs to the world’s tiniest butterfly (Western Pygmy Blue) and the largest (Queen Alexandra’s Birdwing), an incredible variety of butterflies are celebrated here in all of their beauty and wonder.

The series is written by Dianna Hutts Aston, illustrated by Sylvia Long and published by Chronicle.

Dianna Hutts Aston is the author of many books for young readers and the founder of a nonprofit foundation for disadvantaged children, The Oz Project. She lives in San Miguel de Allende, Mexico.

What was the initial spark of your successful nonfiction picture book series?

An Egg Is Quiet was born in the 1970s when my best friend’s three-year-old brother was in school.

The teacher said, “Dusty, tell us something about an egg.”

He thought and said, “An egg is quiet.”

Over the years my mom told me this tidbit countless times. When my daughter was a few years old in the late ’90s, we would walk around the neighborhood in the spring, hunting for eggshells that birds had dropped from their nests.

I thought they were exquisite, and I began to wonder, Why are some speckled? Blue? Of a certain size or shape? 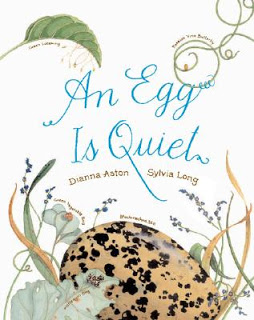 That story my mom had told me finally registered as picture book material. An egg is quiet.

What else is it? Giving. Clever. Colorful. Shapely. And what other creatures besides birds lay eggs? Reptiles, fish, bugs. It all came together by curiosity, observation and research.

And then, what happened was one of those rare occurrences: The manuscript landed on the desk of an editor, Victoria Rock at Chronicle, just when she was looking for one, and one she wanted Sylvia Long to illustrate.

After Egg, my agent, Rosemary Stimola, suggested one on seeds and there came, A Seed Is Sleepy. Next, A Butterfly Is Patient. And soon, A Rock Is Bubbly.

What I’ve loved about the series’ publication is how the books open the eyes of both children and adults, encouraging them to think about ordinary objects in magical ways and to ask questions.

Maybe now, they’ll spend more time looking beyond computer and TV screens and look at the natural world right outside the door.

How has your process/experience been different from book to book? 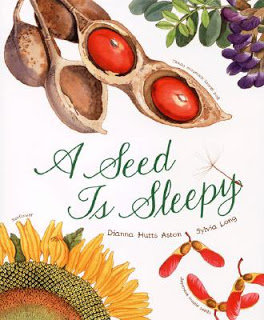 Eggs, seeds and rocks are things you can hold, observe as long as you’d like. Butterflies flit, so obviously, it’s hard to study one unless it’s dead (I collect those). I spent a lot of time in beautiful places, just sitting quietly and watching.

One of the most inspirational moments in working on the butterfly book was when I was walking through a Mexican jungle and came upon a gathering of butterflies on a mud puddle. There were dozens of all shapes and colors, peacefully feeding on the minerals in the muck.

My presence didn’t bother them. In fact, they let me slip my fingers under them and hold them. I had four butterflies on my fingers once, and later, as I began exploring the jungle, one butterfly found a place on my arm and stayed there along the thirty-minute journey.

In my research, I learned that gatherings of butterflies are called “puddle clubs,” and they were indeed finding nourishment in the mud.

The Moon Over Star, illustrated by Jerry Pinkney (Dial, 2008)—and Star is a real town in Texas—came about many years ago when I was unhappy and dreamless. Every night, I’d sit on the porch swing and look at the moon.

Its beauty is comforting and inspires prayers and dreams. I also imagined constantly that I could see the first astronauts on the moon. The more I thought about it, the more I was staggered by such an accomplishment. I was five when the first men landed on the moon, and there were more missions after that, so it became a “regular” part of life for awhile. 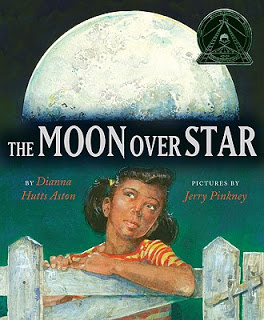 But thirty or so years later, the magnitude of what they’d accomplished resurfaced in my mind. I began to wonder about present-day astronauts and how they, as children, must have been inspired by that one magical night, when millions of people the world over came together to look to the sky in awe.

Although the main character is Mae, the name of illustrator Jerry Pinkney‘s mother, there is also an African-American astronaut named Mae Jemison, who would have been around our Mae’s age on July 20, 1969.

And the surprise on this book? President Barack Obama and First Lady Michelle Obama read it to second graders in D.C.—because, I think, its character has big dreams and she won’t let anyone discourage her. They are, after all, her dreams.

And that’s the gist of my life now, through The Oz Project and through books, to inspire children to dream and then make it happen.

What has surprised you?

The success of the series. It’s been the most pleasurable of my books to write, received not only great reviews and awards, (including an award from the American Academy for the Advancement of Science), but also connected with the audience in a way that made them marvel.

In school, I always strove for those A’s of affirmation. The success of the series feels like straight A’s.

What have you learned along the way?

That there are an infinite number of ways of looking at something, be it an egg, a carrot, a person, a situation, the manifestation of a dream, smoke, clouds, fire, Ferris wheels, a single drop of dew…. 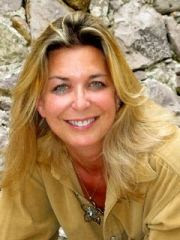 Play with friends in hot air balloons and take long motorcycle rides through the American West and Mexico. After discovering the magic of hot air balloons in San Miguel de Allende, Mexico, I moved there and started a foundation called The Oz Project.

Floating in the realm of the rainbow, I saw a world without borders and I thought, “This is where dreams are born. If you can dream it, you can do it. If you call upon your courage, your wishes usually find form in unexpected ways that are beyond your wildest dreams.”

This was my experience and I wanted to give it to children who have little magic in their lives: children in orphanages, rural villages and those with special needs.

To date, we’ve given rides to hundreds of kids, and it’s an incredibly joyful experience not only for them but for me and our crew. We get to watch children light up from the inside out as they float above the earth, maybe for the only time in their lives.

My hope is that the experience will encourage them to dream without limits and to pursue those dreams.

Dream Something Big: The Story of the Watts Towers, illustrated by Susan L. Roth releases this month—August 2011—from Dial. From the publisher copy: 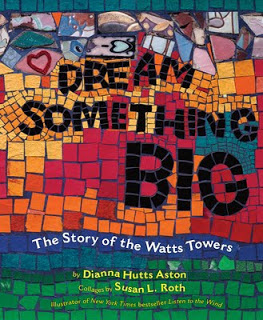 Between 1921 and 1955, Italian immigrant Simon Rodia transformed broken glass, seashells, pottery, and a dream to “do something big” into a U.S. National Landmark.

Readers watch the towers rise from his little plot of land in Watts, California, through the eyes of a fictional girl as she grows and raises her own children.

A final, innovative “build-your-own-tower” activity makes this multicultural, intergenerational tribute a classroom natural and a perfect gift-sure to encourage kids to follow their own big dreams.

Beyond that, rocks, bugs, shells, trees, stars… anything I see outside that makes me wonder.

See an interview with Dianna and Sylvia Long on An Egg Is Quiet.