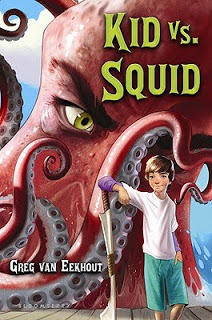 Greg van Eekhout is the first-time author of Kid vs. Squid (Bloomsbury, 2010). From the promotional copy:

The citizens of Atlantis are stuck selling cotton candy on the boardwalk, and only our hero can help.

Thatcher Hill is bored stiff of his summer job dusting the fake mermaids and shrunken heads at his uncle’s seaside Museum of Curiosities. But when a mysterious girl steals an artifact from the museum, Thatcher’s summer becomes an adventure that takes him from the top of the Ferris wheel to the depths of the sea.

Following the thief, he learns that she is a princess of the lost Atlantis. Her people have been cursed by an evil witch to drift at sea all winter and wash up on shore each summer to an even more terrible fate—working the midway games and food stands on the boardwalk.

Can Thatcher help save them before he, too, succumbs to the witch’s curse?

With sharp, witty writing that reads like a middle-grade Douglas Adams‘ Hitchhiker’s Guide to the Galaxy, Greg van Eekhout‘s first book for young readers is a wild ride packed with as many laughs as it has thrills.

Of all the characters I’ve written about in various stories, Thatcher, the boy in Kid vs. Squid, was probably the easiest to discover. I actually didn’t feel like I was discovering him. It was more like he showed up on the page, already talking, and I just had to listen to him.

His best weapon is his smart alec mouth, and my biggest challenge writing him was getting him to shut up.

But Trudy McGee, who started out as Thatcher’s sidekick, kind of threatened to take over the book. She’s sort of a detective/superhero, and she’s all about solving problems, taking action, throwing fire crackers, whatever it takes to get the job done.

Both characters could dominate a scene, Thatcher with his wisecracks and Trudy with her backpack full of crime-fighting gear. And whenever I had the two of them on the page together, it felt like watching a pair of actors improvise. All I had to do was nudge them along to keep the story moving.

Most of the time, writing doesn’t work like that for me, but these two characters made it easy.

Most of the other characters in Kid vs. Squid came about just by imagining who would live in a town cursed by the severed head of a witch from Atlantis. It just made sense that there’d be jellyfish boys riding bikes, and that the king of Atlantis would be working the popcorn stand.

A couple of characters, though, fell in my lap out of real life. I was on the beach one day when this guy walked out of the surf, completely draped in kelp. So much kelp that it looked as if he was made of kelp! So I took that image and made up the evil witch’s henchmen, the kelp guys.

I think most kids start out as fantasy fans, even if the fantasy they’re into isn’t necessarily Tolkien-style with swords and wizards and eating stew with elves. Dr. Seuss is fantasy. “Toy Story” is fantasy. Spider-Man is fantasy. Most entertainment for kids features an elevated reality in which people have abilities that we don’t have in real life or the laws of physics don’t resemble what goes on in the real world or animals talk.

A walking, talking sea sponge? Total fantasy. So basically, I’ve been a fantasy fan all my life.

My inspiration comes from so many sources that it’s really hard to narrow it down to any particular books, but just off the top of my head, Something Wicked This Way Comes by Ray Bradbury (Simon & Schuster, 1962) stands out. I like the idea that you don’t have to go somewhere else to experience fantasy, that there’s weird stuff going on all around us, maybe out in the open, maybe in the shadows, and Bradbury often takes that approach.

Probably, though, the more immediately visible influences on my work are comic books and cheesy ’70s and ’80s Saturday morning cartoons. 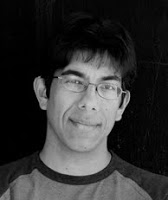 I’m lucky in that my local indie bookstore, Mysterious Galaxy, has been incredibly supportive. They’ve had me to the store twice for signings, and they’ve gotten me on panels at Comic-Con, and they set up my first school visit.

I’m a bit skeptical about the effectiveness of self-promotion, so my approach is just to do things that I enjoy. Answering interview questions is fun. And I like meeting readers face-to-face. So even if turns out that making appearances doesn’t have any real measurable impact on my sales, at least I’ve gotten to meet people who’ve read my book or might potentially read my book, and that’s it’s own reward.

Kirkus Reviews cheers, “Drawing together a memorable supporting cast that ranges from a half-human Atlantean princess to a genial shark-man (‘Howdy-do. Swim with us to shore or we’ll eat your legs’), van Eekhout chivvies the plot along at a lively pace to a hold-your-breath climax and a deftly choreographed resolution.”

School Library Journal cheers, “Van Eekhout carefully balances his tongue in his cheek with some really creepy situations, and the result is a humorous fantasy that will rush over young readers like a tidal wave.”