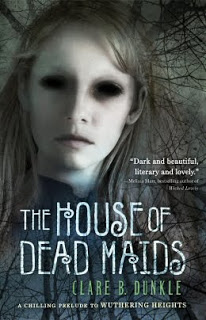 By Clare B. Dunkle

A seventh-grader once asked why I wrote about monsters. Didn’t I find it too scary?

“I can write about goblins, witches, werewolves, demons, and ghosts without losing sleep,” I told her. “But I can’t write about this.” My vague gesture took in the students, the classroom, final exams, wars, famines, and all the rest of it. “Because this is much more terrifying.”

But in spite of my best efforts to escape from real life into tales of magic, “this” has managed to sneak into my writing anyway: the plain old nastiness of one unhappy human being’s behavior towards another.

Really, without knowing it, I’ve invited that nastiness in. It goes hand in hand with writing about monsters. That’s because monsters are unusual—disturbingly different—not like us. And if history teaches us one thing, it’s that we human beings reserve our harshest, most barbaric behavior for the people who we think are not like us.

Heathcliff is a magnificent monster. His passion and brutality, his uncanny origin, his obsessive longing to reunite with his sweetheart in death—all these things make him larger than life, one of the traditional definitions of the word “monster.”

Moreover, the people he meets in Wuthering Heights (1847) immediately begin to treat him like a monster. He enters the book as a dirty, hungry little boy, a child of no more than seven. But how does his new family welcome him? By fighting over him. By threatening to throw him out into the night. By refusing him a bed. By spitting on him.

If Emily Brontë’s story were nothing more than a “poor boy does well” tale, it wouldn’t be a classic. But the fascinating fact is that Heathcliff begins at once to justify his new family’s suspicions. He doesn’t become a monster because of the family’s ill treatment. He already is a monster. He exploits his foster father’s fondness of him. He blackmails his foster brother. And, in one of the book’s most chilling moments, young Cathy watches him construct a trap over a bird nest so that the parents will have to let the baby birds starve. This breathtakingly sadistic behavior passes for play in young Heathcliff’s mind. We can only wonder what else he teaches his new playmate.

I have pondered for decades what could have happened to Heathcliff before the beginning of Emily Brontë’s classic to make him the monster he is. And when authors ponder, they write books. My new novel, The House of Dead Maids (Henry Holt, 2010), posits an entertaining explanation for Heathcliff’s behavior in Wuthering Heights. When he enters my book, he is still a little boy—a savage, dangerous, badly abused, horribly traumatized little boy. But when he leaves my book, his character has hardened. He has become a monster. 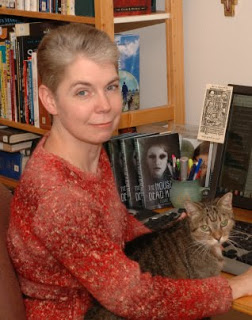 The question of what has happened to Heathcliff is not the only one my prequel attempts to solve. It tackles a number of Wuthering Heights puzzles. Among other things, it proposes answers to these questions: Why does Earnshaw take Heathcliff in? Where does Heathcliff go when he leaves Wuthering Heights for three years? How does he become wealthy? Why does he feel he should be master of the house even though Hindley is older? Why does he feel compelled to gather his household around the dinner table with him even though he hates the sight of them? Why does he claim to know ghosts walk the earth? Why does he dislike books? Why does he hate to hear women laugh? Why do Cathy and he wish to be buried together? What causes Cathy’s episodes of delirium? Why does Cathy believe she will be “on that hillside” of Wuthering Heights rather than in heaven after she dies? And of course, the greatest puzzle of all: Where does Heathcliff get his name?

I’ve come to feel that I specialize in monsters. I started my writing career dealing with unsightly goblins. Then I moved on to werewolves and killer bots. But the most frightening monster is the one who can hide in a crowd—the monster who looks like us.

The most dreadful monster is the one who lurks within our hearts—the monster who, unchecked, has produced such horrors in our history as witch-burnings, slavery, and the Holocaust.

These are the monsters who people Wuthering Heights, and you’ll find them in The House of Dead Maids too. I made the ghosts in that book as scary as I could, God knows; but in the end, it’s the regular human beings who will keep you awake at night.