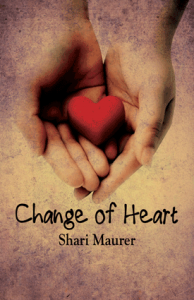 Shari Maurer is the first-time author of Change of Heart (WestSide, 2010). From the promotional copy:

Shortly after her sixteenth birthday, popular varsity soccer star Emmi comes down with an ordinary virus. But when she doesn’t bounce back as always, she gets the worst possible news—she’s had myocarditis that’s destroyed her heart, putting her into congestive heart failure.

This formerly energetic teen can now barely walk across a room without having to stop and rest. And the prognosis is bleak: without a heart transplant, she’ll die in a matter of months.

It’s only her growing friendship with Abe, the funny, smart boy she meets in the cardiac clinic, that finally cheers her up.

But difficult questions race through her mind while she waits: Will she get a heart in time? Will she even survive the surgery? What if her body rejects the heart?

When tragedy strikes close to home, Emmi must rely even more on her inner strength in order to carry on.

I was lucky to have a series of great writing teachers along the way. First, there was my seventh grade English teacher, Joe Mastropolo, who taught me the fundamentals of grammar–and then taught my daughter when she was in seventh grade, so I got to relive all the lessons again.

Besides giving me an impeccable grammar foundation, he made sure I expunged the word “like” from my vocabulary (as in “I like went down the street and like saw this like totally hot guy.”)

I was an English major at Duke University, but also earned a Certificate in Film and Video and took several playwriting classes. Dr. David Ball taught me at least four classes for my Duke degree (including “Intro to Playwriting,” an independent study and one of my all-time favorites “The Films of Earl Owensby” focusing on an independent filmmaker in North Carolina).

I still refer to David’s book, Backwards and Forwards (Southern Illinois University Press, 1983) and think about his conflict-launch, conflict-launch method of playwriting. He really pushed the message that conflict is essential to drama. David explained that conflict is when a character wants something (motivation), but there is an obstacle preventing that. I find this can be applied to novels, too. Without conflict, books are boring.

To my memory (which I admit is spotty at times), David was also the one who would ask: “What is the major dramatic question?”

If you couldn’t figure it out a few minutes into the play (or book or movie), then it wasn’t properly done. To this day, my husband and I still use this standard and will often turn to each other part of the way into a movie or play and ask each other what the major dramatic question is (if we have to ask it, it generally means there is no major dramatic question and it isn’t working for us).

Next, there was the late Venable Herndon at New York University. More than anything, he gave me the encouragement to believe I could be a writer.

Venable was my screenwriting professor and is best known for having written the movie, “Alice’s Restaurant” (1969). His gift was reaching each aspiring writer and finding our emotional core and having us write from there. And his other words of wisdom? “Don’t be weighed down by the burdens of others.” Which was basically advice to stay away from family drama, office politics, and other distractions and focus on writing.

When I wanted to return to writing after all of my kids were in school, I decided to take a class from the Institute of Children’s Literature.

I admit I was wary at first–how legitimate could a school be if they were advertising for students in a magazine? It was beyond legitimate. It was a logical, specific, instructive way to revisit my writing education.

I was lucky to get a fabulous instructor, Susan Ludwig, who guided me through the course and pushed me to make my writing much stronger. Each lesson builds on the next, and while it was mainly geared for magazine writing, they were skills that could be applied in any children’s writing. I always eagerly awaited Susan’s comments and learned so much by incorporating them into my stories. I even sold two of my assignments, which I credit to Susan’s guidance and editing.

Now my greatest teachers are all the wonderful writers whose books I’m lucky enough to read. I find that from every book I read, I can gleam something useful from my own writing.

This includes my crit partners, Jill Arabas and Dawn Buthorn. As I read their work and see how they critique mine, I grow even more as a writer. I don’t think you ever stop learning as a writer. At least I hope not–I feel like I have so much more to learn! 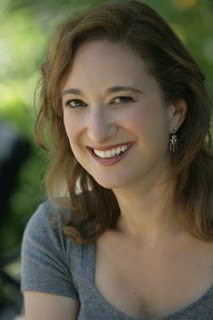 In my case, there’s the easy answer which is that at any given time there are a bunch of teenagers in my kitchen, car, etc. My kids are 15, 13 and 10, and we always have their friends floating around. I love listening to them–both to get a good feel for authentic voice and also to hear what’s important to them.

Confession time: most afternoons when I’m waiting to pick my daughter up at the high school, I roll down my windows and watch and listen (so if you’re at the Clarkstown North parking lot and you see a woman in a blue minivan jotting down notes as you pass by–that’s me!). It’s amazing what you can learn by watching body language (how girls will giggle and lean toward a boy they like as they walk) and listening to how they talk to each other (often far more direct and blunt than we’d think).

When I wrote the first draft of Change of Heart, a friend who is a librarian told me that the girls weren’t snarky enough to each other. She was right, and I think it gave Emmi and Becca a much more real give and take, particularly in that Becca keeps up the snark even when Emmi gets sick. Emmi appreciates her for that, it’s part of what gets her through.

Sometimes I will pick one of the kids I know and use their voice as a guideline for one of my characters, though I find that even if the voice starts mirroring a real person, as the character becomes his or her own person, the real person’s voice fades away.

I also find that some of the real teens I know might actually not sound so believable in fiction. Some of them are cheerleader-gushy, some are slightly spacey and others are tough with thick New York accents. The balance is to find a way to take reality and combine it with the voices in your head to create an authentic-sounding teen.

Having a pool of available teenagers as resources has been invaluable. Whether it’s calling my niece to give me a supply of synonyms for “hot” (as in “hot guy”) or asking them to update me on the latest social network technology, it’s wonderful to have all of them around.

There were several times during my revisions on Change of Heart that my editor would question a word choice from the teen. I was able to turn to my daughter and her friends and run it by them to get the most authentic word for the situation. And my son will be the first to tell me “No one says that, Mom.” Certainly the vocabulary I use isn’t always the same as the teens–and it’s all constantly changing.

As I begin a project or even when I’m stuck, I often find it’s helpful to do character exercises. I might pick one character and write letters or journal entries from them or do a whole backstory for another character.

As I drive my kids around, I often find my mind wandering to imaginary conversations between my characters (I do some of my best thinking in the car–which is good because it feels like I am always in the car!) Some of these make it into the book, and some just give me a broader idea of the characters and their relationships.

Plot often springs from these exercises because they give me a better understanding of each character’s motivations. I find it can be helpful while revising to reread the book from different characters’ points of view. This fleshes out your story and makes each person in the book more believable.

After my kids are grown, I’ll have to find other reasons to drive around so that I can brainstorm. And I wonder if it’ll still be okay to sit at the high school and observe. Either that or I’ll have to get the strategic chairs next to big groups of teens at Starbucks. I guess I’ll figure it out when I get there.

For now, I’m enjoying the process of characterization. And I have a great excuse to eavesdrop on my kids!

Shari Maurer’s life has always been full of “heart.” Married to a cardiologist, she is the co-author of The Parent’s Guide to Children’s Congenital Heart Defects: What They Are, How to Treat Them, How to Cope with Them (Three Rivers Press, 2001).

After graduating from Duke University and NYU, she spent six years at the Children’s Television Workshop (now Sesame Workshop) working on International versions of “Sesame Street” and other kids’ programs.