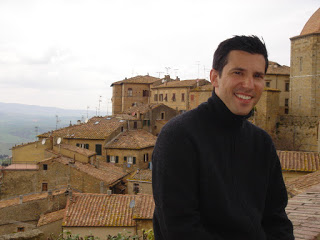 Matt Myklusch is the first-time author of Jack Blank and the Imagine Nation (Aladdin, 2010). From the promotional copy:

All Jack Blank knows is his bleak, dreary life at St. Barnaby’s Home for the Hopeless, Abandoned, Forgotten, and Lost, an orphanage that sinks further into the swampland of New Jersey with each passing year. His aptitude tests predict that he will spend a long, unhappy career as a toilet brush cleaner.

His only chance at escape comes through the comic books donated years ago to the orphanage that he secretly reads in the dark corners of the library.

Everything changes one icy gray morning when Jack receives two visitors that alter his life forever. The first is a deadly robot straight out of one of his comic books that tries its best to blow him up. The second is an emissary from a secret country called the Imagine Nation, an astonishing place where all the fantastic and unbelievable things in our world originate–including Jack.

Jack soon discovers that he has an amazing ability–one that could make him the savior of the Imagine Nation and the world beyond, or the biggest threat they’ve ever faced. 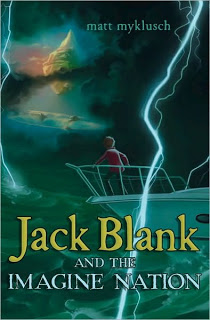 I am a plotter and a planner. That’s how my brain works with everything, so why should writing be any different?

For me, writing without an outline is like trying to drive cross-country armed with only a map of Delaware, Utah, and California. Certainly, it can be done, and there are plenty of writers who don’t need a map at all. They can make it from NYC to LA just by going west, but not me. I need to plan out the route so I know where I’m going. Even then, I like to have GPS so I don’t get lost.

Having said that, it’s important to note that the route is not carved in stone. I might still wander off and visit random tourist attractions along the way, but only if they are really cool, like the World’s Largest Rubber Band Ball or something (located somewhere near Topeka, I believe). [Actually, it’s in Lauderhill, Florida.]

I start off with a basic idea of what I want to do. I don’t know where the initial spark comes from, but I usually know the broad strokes of my story… the feel of it, the three acts, the turning points, and maybe a few big moments I am trying to create and make readers care about.

Then, I write a stream-of-consciousness mess of an outline the includes everything from basic scene overviews to specific lines of dialogue to notes to myself. It starts out as something that only I can understand, but over time, I break that down into chapters and clean it up.

Eventually, I have a map to my story, but that’s all it is. A road map. A guide. It’s not a story yet. It’s not even interesting yet. The characters are what make it interesting.

This is where a lot of new writers trip up when struggling with plot. They focus too much on plot. I used to do this all the time. I used to write stories where the characters weren’t people, they were just tools I used for advancing plot points. As readers, you and I are never going to care about tools. We want characters that fascinate us, infuriate us, make us laugh, and more.

If you don’t know what comes next in your story, sometimes you have to get to know your characters a little better. What do they want? What are they afraid of? What have they been through in life that makes them who they are?

I’m a plotter and a planner, but that’s just how I like to work. When I’m writing that first stream-of-consciousness outline, the question of “what comes next?” is usually answered by the characters. That’s because I know how they would react to what is going on in the story. And, this might sound weird, but even though you’re the one creating the characters, sometimes what they do can surprise you. 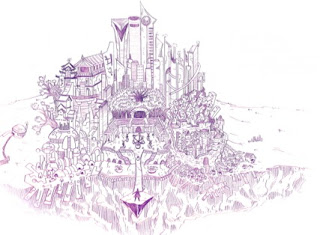 With Jack Blank, I wanted to showcase the comic book world that fired my imagination as a kid, and introduce it to an audience that hasn’t seen it before.

I thought about how in the movies, it’s always just one superhero versus one villain, and the hero is usually the only superhero in the world.

It’s not like that in the comic books. In the comics, Iron-Man, Thor, Spider-Man, the X-Men… they’re all running around the same city fighting an endless supply of bad guys. It’s normal for people there to see heroes fighting villains in the middle of the street on a random Tuesday. That fully developed superhero world really doesn’t exist outside of comic books.

In this novel, I wanted to create my own superhero world. I wanted to show people who might otherwise never pick up a comic book how much fun that world could be, but I couldn’t really wrap my head around it until I drew it.

I am a very visual person, and drawing is another big part of my process. I like to really be able to see my characters and the places they inhabit. That might not have been the case if I wrote for another genre, but with superhero/fantasy-based stories, it’s ideal. Drawing really helps me get into the world of my characters, and I absolutely need to get into their world if I’m going to have any hope of leading a reader through it.

My thinking is, I have to know that place inside and out. There can’t be any ambiguity on my part, or the reader won’t know where I’m taking them. (If I can’t see it, they won’t see it).

Luckily, growing up, I spent a lot of time drawing and creating my own comic book characters. Over the years, I accumulated enough of them to fill a whole world and then some. That world became the Imagine Nation, but the question still remained, what would this world look like?

The comic book world has everything— magic, sci-fi, superheroes, kung fu, fantasy, and more. What aspects of the comic universe was I going to include? It wasn’t until I drew the city where all the heroes, villains, ninjas, aliens, and robots lived that I finally got a handle on the Imagine Nation. I started thinking about a city with different boroughs, each one dedicated to a different corner of the comic book world. That’s when things really started to click.

I think at some point every kid wants to grow up to be a superhero. That’s why I decided the best way to introduce the Imagine Nation to readers was through the eyes of a child. That led me to Jack Blank, a young orphan with a mysterious past, and a future that could see him become anything from hero to villain to lowly toilet-brush cleaner. When the time came to actually write it all, I just had one rule and that was to have fun doing it.

Matt Myklusch spends his days working for mtvU, MTV’s twenty-four hour college network. A lifelong love for comic books inspired him to spend his nights and weekends writing Jack Blank and the Imagine Nation. He lives in New Jersey with his wife, son, and trusty dog, Indy.