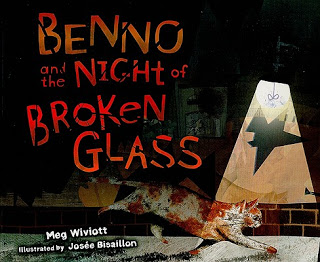 Meg Wiviott is the first-time author of Benno and the Night of Broken Glass, illustrated by Josee Bisaillon (Kar-Ben, 2010). From the promotional copy:

A neighborhood cat observes the changes in German and Jewish families in its town during the period leading up to Kristallnacht, the Night of Broken Glass that becomes the true beginning of the Holocaust.

This cat’s-eye view introduces the Holocaust to children in a gentle way that can open discussion of this period.

What inspired you to choose the particular point of view in your book? What considerations came into play? Did you try the story from a different point of view at some point? If so, what made you change your mind?

When I started working on this project I began with an omniscient, distant narrator. I wanted to present the information simply as facts. No emotion. Without getting personal.

When dealing with the Holocaust for young readers, I was conscious of the balance between being accurate and not frightening the child reader. I wanted to tell the story and let sidebars spell out the historical and political facts of Kristallnacht.

I thought of Snowflake Bentley by Jacqueline Briggs Martin, illustrated by Mary Azarian (Houghton Mifflin, 1999), an excellent example of a story with sidebars. That way children and their parents could read the story and add in the facts as the child became ready for them. 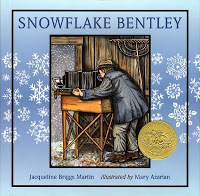 The problem with this approach was that it was boring. My critique group wisely told me that no one would care, that I had to get personal. They suggested I tell the story through the point of view of a child.

I had many long conversations with one of my critique-mates over this issue. I did not want to tell the story from the point of view of a Jewish child for many reasons.

First, I thought it would be too frightening, bringing the child reader too close to the anxiety and fear of the story child.

Also, because Kristallnacht is considered by many to be the beginning of the Holocaust, the end of the story is not happy or uplifting. The ending has to be ambiguous and terrifying. 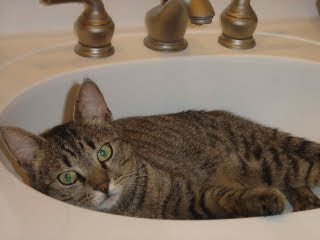 In trying to think of a way to tell the story, I remembered when my husband and I were first married, we lived in an apartment building where the super allowed a stray cat to sleep in the boiler room. Hobo was a tough, street-smart cat and everyone in the building loved him.

So what finally came to me was “Benno” (though he was originally named “Kater,” which means “tomcat” in German).

Using distant third person point of view, Benno is an unbiased observer. And, being a cat, he has a child-like innocence about him. He is befriended by the people of Rosenstrasse, welcomed into homes and shops, and through his eyes the reader experiences the grim changes occurring in Nazi Germany and the events of Kristallnacht.

Writing from Benno’s point of view was easy and solved my problems. He gave me the distance I needed at the same time allowed me to show the emotions of the story. Besides, I love cats! 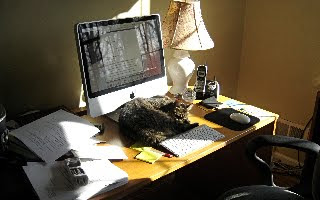 Benno had a two unsuccessful ventures into the publishing world before I decided to attend the Jewish Children’s Book Writers and Illustrators Conference in November 2006.

I signed up for a 15-minute critique with Judye Groner, editor and founder of Kar-Ben.

Before the conference, I visited Kar-Ben’s website. They were the perfect publisher, a small house that publishes only picture books with Jewish themes. How perfect for a picture book on Kristallnacht. I went off to the conference like a woman on a mission.

Now anybody who has signed up for one of these 15-minute critiques knows that 15 minutes is not a lot of time. Judye asked those of us who she’d be critiquing to send our first pages to her via email before the conference. I did that, but because I saw the book as a story with sidebars, I divided the page in columns with the story on the left and the facts for the sidebars on the right. If you didn’t know what you were looking at, it was confusing.

So, in our 15 minutes together, Judye had to read the whole manuscript. I sat there. Then she didn’t have much to say. She suggested that I give Sophie a favorite book that would later be thrown onto the fire, it would be something the kids could relate to. That was it.

Usually, when I’ve done these types of critiques before the editor has a lot to say about what could be changed. I came out of the meeting feeling disappointed, as if it had been a waste of time.

The next day, I got two emails from Judye. The first was to all the writers whose manuscripts she had critiqued saying thank you. The second was for me. She thanked me for coming to the conference and encouraged me to make the change we’d talked about and resubmit because there were no children’s books on Kristallancht.

I made the changes, took the revision to my critique group, and then submitted it to Judye. A month later, Judye emailed to say she was recommending that the story be taken to the acquisitions committee in the spring.

Ta-da! The rest is history. In revisions, Kar-Ben did ask me to do away with the sidebars and use an afterword instead, which provides the facts without intruding on the story.

Read a Cynsations interview with Judye Groner on Kar-Ben Publishing.