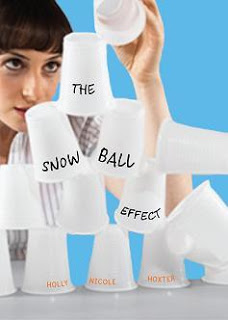 Holly Nicole Hoxter is the first-time author of The Snowball Effect (HarperTeen, 2010). From the promotional copy:

Lainey Pike can tell you everything you need to know about the people in her family just by letting you know how they died. Her reckless stepfather drove his motorcycle off the highway and caused the biggest traffic jam in years. Her long-suffering grandmother lived through cancer and a heart attack before finally succumbing to a stroke. And Lainey’s mother–well, Lainey’s mother hanged herself in the basement just days after Lainey’s high school graduation.

Now Lainey’s five-year-old brother is an orphan, and her estranged older sister is moving back home to be his guardian. Meanwhile, Lainey’s boyfriend is thinking about having a family of their own, and her best friends are always asking the wrong sorts of questions and giving advice Lainey doesn’t want to hear.

As she tries to pull away from everything familiar, Lainey meets an intriguing new guy who, through a series of Slurpees, burgers, and snowballs, helps her to make peace with a parent she never understood.

When I took my first college writing workshop, I was seventeen years old and terrified. I’d gone to a magnet high school with a literary arts program, but we’d spent most of our time discussing iambic pentameter and not a lot of time critiquing each other’s writing.

So, on the day of my first critique, I stood in the hallway waiting for the previous class to end, and I had to squeeze my arms to keep myself from shaking. I held on so tightly my fingernails cut through my skin. And then class started…and I relaxed.

As the discussion went on, I realized they didn’t hate my story! In fact, they kind of liked it. I was astounded and relieved that a classroom of aspiring writers took me seriously. I’d always known that I wanted to be a writer, but my classmates’ approval strengthened my belief that it could actually happen. And I also learned that I was tougher than I’d thought. Their criticisms didn’t hurt my feelings; they just made me eager to learn and improve.

Of course all things worth learning can’t be taught in a classroom. My next “ah-ha!” moment took place the following year in the break room of the supermarket where I worked.

A woman from the deli had heard I wanted to be a writer, and she told me that she used to write stories, too, when she was my age. A few editors had sent back complimentary rejections, but she never had anything published and eventually she stopped writing.

As I finished my lunch, I could very clearly imagine my future turning out like hers. I liked my job—I worked in the produce department cutting fruits and vegetables for the salad bar—and I liked my co-workers. I could see myself becoming comfortable and complacent, and eventually letting the publishing dream drift away like it had for the woman from the deli.

That horrified me. I knew I had talent, but that moment in the break room made me suddenly understand that persistence and determination are just as important—maybe more important—than talent. I’d been incredibly naïve up until that point, and it was honestly the first moment I’d ever really considered how hard I would have to work to make writing my career. 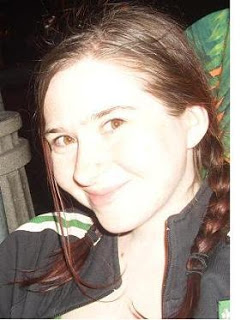 It doesn’t feel like much time has passed since I was a teenager, although I’m somehow coming up on my ten-year high school reunion. It astounds me how pervasive and mainstream the Internet has become since then.

I’ve always had a huge fear of “dating” my novels in a negative way, so in The Snowball Effect, I tried to ignore technology as much as possible. Lainey has a cell phone and makes one mention of the Internet, but that’s it. At one point, she remarks that she “taped” her soap opera to watch later in the day. A copy editor asked if I wanted to change that reference to something more current, like a DVR or a Tivo. I didn’t.

But I think eventually you write yourself into situations where the absence of technology would be even more conspicuous than its presence, so you can’t ignore it completely.

The novel I currently have on submissions is the complete opposite. It makes heavy use of the Internet and social networking sites and blogging. It’s actually a pretty big aspect of the story.

The main character reads online diaries on a fictional version of livejournal, and it eventually leads her to the love interest and sets the plot in motion. So I guess it’s something that has to be determined on a case by case basis.

If it can be ignored, then it should be ignored. I wouldn’t drop references to the latest Apple products or cool video games just for the sake of trying to look hip, but if something is vital to the story, then I use it.

I have no idea where the technology will go from here so I can’t even begin to fathom how outdated our new innovations will seem in 2020. We’ll probably have flying cars by then, right?