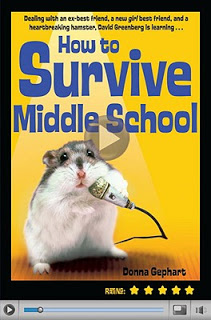 Enter to win How to Survive Middle School by Donna Gephart (Delacorte, 2010). From the promotional copy:

Eleven-year-old David Greenberg dreams of becoming a TV superstar like his idol, Jon Stewart. But in real life, David is just another kid terrified of starting his first year at Harman Middle School. With a wacky sense of humor and hilarious Top 6½ Lists, David spends his free time making Talk Time videos, which he posts on YouTube. But before he can get famous, he has to figure out a way to deal with:

6. Middle school (much scarier than it sounds!)
5. His best friend gone girl-crazy
4. A runaway mom who has no phone!
3. The threat of a swirlie on his birthday
2. A terrifying cousin
1. His # 1 fan, Bubbe (his Jewish grandmother)
1/2. Did we mention Hammy, the hamster who’s determined to break David’s heart?

When David and his best friend have a fight, David is lucky enough to make a pretty cool new friend, Sophie–who just (gulp) happens to be a girl. Sophie thinks David’s videos are hilarious, and she starts sending out the links to everyone she knows. Sophie’s friends tell their friends, and before David knows it, thousands of people are viewing his videos–including some of the last people he would have expected. David may still feel like a real-life schmo, but is he ready to become an Internet superstar?

To enter the giveaway, email me (scroll and click envelope) with your name and snail/street mail address and type “How to Survive Middle School” in the subject line. Facebook, JacketFlap, MySpace, and Twitter readers are welcome to just privately message me with the title in the header or comment on this round-up; I’ll write you for contact information, if you win. Deadline: midnight CST July 31. Note: U.S. entries only.

The winner of a paperback copy of Swim the Fly by Don Calame (Candlewick, 2010) was Megan in Maine! Thanks to all who entered, and to Candlewick Press for sponsoring the giveaway.

Congratulations to Mari Mancusi on the paperback release of Gamer Girl (Speak, 2010)! From the promotional copy: “Maddy’s life couldn’t get much worse. Her parents split and now she’s stuck in a small town and at a new school. Most of the time, she retreats into her manga art, but when she gets into the Fields of Fantasy online computer game, she knows she’s found the one place she can be herself. In the game world, Maddy can be the beautiful and magical Allora and have a virtually perfect life. And she even finds a little romance. But can Maddy escape her real-life problems altogether, or will she have to find a way to make her real world just as amazing as her virtual one?” Don’t miss a guest post by Mari on Kids Don’t Read Like They Used To, and That’s a Good Thing.

How to Make a Literary Life: Charming Notes from Kimberley Griffiths Little from Kimberly’s Wanderings. Inspired by Making a Literary Life: Advice for Writers and Other Dreamers by Carolyn See (Random House, 2002). Peek: “Are you sometimes secretly afraid that you’re merely an ordinary Joe/Jane and all of your favorite authors who are up on that pedestal of perfect sentences just look coolly down their noses at all of us? Not so! You too can be a part of the literary scene and the book world—even if you’re just a beginner, have no credits to your name, and are still struggling with a cohesive plot, let alone able to master gorgeously crafted prose.” Read a Cynsations interview with Kimberley.

The Rule of Twenty by Michael Stearns from Upstart Crow Literary. Peek: “Bruce [Coville] mentioned something he called “The Rule of Twenty.” He doesn’t recall where he picked it up—a business article? a self-help book? a primer on original thinking?—but wherever it came from, I have since relied on it and relied on it often.” Source: Nathan Bransford.

Goals Make Dreams Reality by Danyelle Leafty from QueryTracker.net. Peek: “I’ve found that having a goal to be published by one of the bigger houses and possibly make NYT Bestsellerdom changes the way I look at writing.”

Books With Gay Themes for Young Readers Take Off by the Associated Press from The New York Times. Peek: “‘Landing as high on the New York Times list as we did with Will Grayson, Will Grayson made a big statement to the children’s publishing world that gay characters are not a commercial liability,’ [John] Green said. ”This is an important statement to make.'”

Agent Interview: Jill Cocoran of the Herman Agency by Alice Pope from Alice Pople’s SCBWI Children’s Market Blog. Peek: “Regarding websites, I think websites are a must for unpublished and published illustrators. If I hear of you, I want to click and see your work immediately, while your name is still in my mind. So do editors and art directors.”

Does Branding Make Sense? by R.L. LaFevers from Shrinking Violent Promotions. Peek: “I am willing to bet there is some hidden core there that links all your stories to you. There is the nugget of your brand. Here are some questions to get you thinking about that.”

The Evolving Voice of the Young Adult Novel by Swati Avasthi from A View from the Loft. Peek: “Voice is the circulatory system of a YA novel: it streams from one vital organ to the next, gives us the novel’s pulse, and brings oxygen and life to otherwise sluggish words. Without voice, the energy is drained; with it, anything is possible.” Source: Gwenda Bond. Read a Cynsations interview with Swati.

The Care and Feeding of Young Library Patrons by Wendy S. from From the Mixed-up Files of Middle Grade Authors. Peek: “I expect the demand for e-books among middle-graders to go up. We are seeing more holds showing up in our system for e-books all the time. The advantage to us is that e-books take up no shelf space. It’s an interesting time.” Source: Molly O’Neil.

The June 2010 Carnival of Children’s Literature by Lee Wind from I’m Here. I’m Queer. What the Hell Do I Read?

Rainbow Books 2010: a bibliography of picture books as well as fiction and nonfiction for older children and teens from ALA Rainbow Project. Peek: “The Gay, Lesbian, Bisexual, and Transgendered Round Table and the Social Responsibilities Round Table of the American Library Association have released the 2010 Rainbow Project Bibliography of recommended titles for youth from birth to age 18 that contain significant and authentic gay, lesbian, bisexual, transgender, queer, or questioning (GLBTQ) content.” See also Exploring Diversity: Themes & Communities for additional related bibliographies.

Cynsational Writer Tip: books and ARCs given away at conferences are not “free;” they were paid for by the publisher and represent some percentage of the promotional budget allocated an author whose marketing support is likely quite limited. Please make every effort to spread the word about the titles you pick up and/or pass them along to a teacher/librarian.

Coffee Break with Carol Lynch Williams by Debbi Michiko Florence. Peek: “I guess I would have to say my daughters have never lost faith in me as a writer. During every tough review, every rejection, every place I got stuck in my writing, my daughters–all five of them–have believed in me.” Read a Cynsations interview with Carol.

Reviews by Meg Cabot. Peek: “If I still listened to reviews, not only would I have driven a stake through my own heart a long time ago, I’d have missed out on some of my favorite movies of all time!” Source: Author2Author.

Born to Be Wild: Libba Bray by Betty Carter from School Library Journal. Peek: “There’s an awful lot of pressure on kids these days and a lot of life they have to figure out themselves. Certainly one of the valuable experiences of my life was living through a horrible disfiguring car accident because no one could protect me from that. Parents can’t make everything right. That’s not the way life is. The true measure of a person is being able to get back up.” Source: Jo Knowles. Read a Cynsations interview with Libba.

Cutting Characters You Love by Anna Staniszewski from Vision A Resource for Writers. Peek: “…it can be hard to step back and realize that your characters need to be cut. Here are a few scenarios to look out for….”

Chiko isn’t a fighter by nature. He’s a book-loving Burmese boy whose father, a doctor, is in prison for resisting the government. Tu Reh, on the other hand, wants to fight for freedom after watching Burmese soldiers destroy his Karenni family’s home and bamboo fields. Timidity becomes courage and anger becomes compassion as each boy is changed by unlikely friendships formed under extreme circumstances.

This coming-of-age novel takes place against the political and military backdrop of modern-day Burma. Narrated by two fifteen-year-old boys on opposing sides of the conflict between the Burmese government and the Karenni, one of the many ethnic minorities in Burma, Bamboo People explores the nature of violence, power, and prejudice.

Thank you to host librarian Mary Ann Tsosie and all those who attended one of my workshops and/or lecture this weekend at The University of New Mexico in Albuquerque! Note: “The Summer Sunset lecture series is co-sponsored by University Libraries and the Vice Provost for Academic Affairs.” Here’s a peek inside UNM: 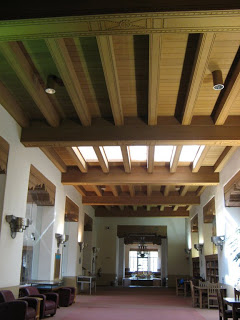 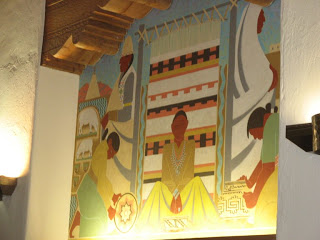 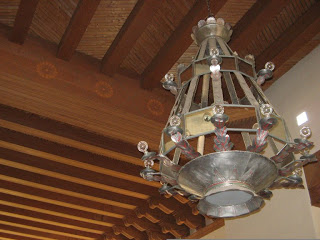 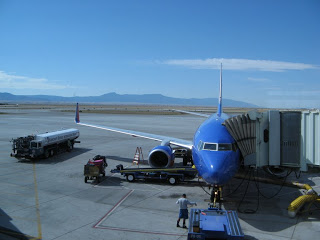 As much fun as I’ve had of late, traveling and visiting book lovers from around the country, I’m pleased to say that I’ll be home for the next several months, working hard on the Eternal graphic novel and a new prose novel that will be set in the same universe.

My best takeaway insight, having sampled much of what the U.S. airlines industry has to offer is: fly Southwest! 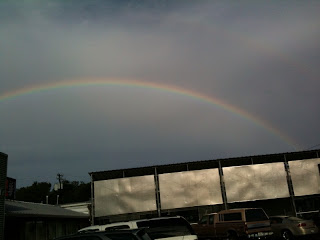 Beyond that, Austin is in Central Texas, so we’re in no danger from Hurricane Alex. But we are seeing our share of rain and rainbows. This shot was taken from West Seventh Street.

CynthiaLeitichSmith’s Channel at YouTube is now online. At this point, I’m just getting to know the system and adding favorites for your viewing pleasure–so far, my official book trailers and several by readers. Note: once I get a chance, I’ll add the trailers of some of my own favorite reads.