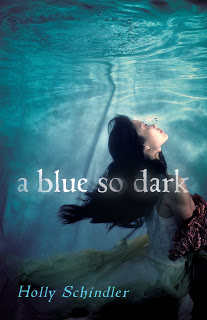 Holly Schindler is the first-time author of A Blue So Dark (Flux, 2010). From the promotional copy:

Fifteen-year-old Aura Ambrose has been hiding a secret. Her mother, a talented artist and art teacher, is slowly being consumed by schizophrenia, and Aura has been her sole caretaker ever since Aura’s dad left them. Convinced that “creative” equals crazy, Aura shuns her own artistic talent. But as her mother sinks deeper into the darkness of mental illness, the hunger for a creative outlet draws Aura toward the depths of her imagination.

Just as desperation threatens to swallow her whole, Aura discovers that art, love, and family are profoundly linked—and together may offer an escape from her fears.

I’ve been writing, in all honesty, since—ah—shortly after birth. I used to love to write stories at my child-sized rolltop desk when I was a little girl. And I used to come up with full-blown dramas to act out with my brother on cassette tapes.

(That hiss in the background of those old tapes isn’t from the old tape deck…it’s me whispering, “Say this now, John!” Ugh. I wonder sometimes why the guy still talks to me…)

As I got a little older, I filled up about (ahem) 6.3 million spiral notebooks in high school, majored in English, got a master’s in English (and was lucky enough to snare a few publications while in college).

Degree in hand, I decided to nix the idea of full-time work in favor of pursuing a writing career.

(This was only possible because I had some incredible financial support from my family. Incredible. I’m pretty sure, though, that they thought I’d explode if I didn’t write…)

Of course, when I started on my journey to become a published novelist, I just knew—knew—that it’d take, oh, a year or so to write a novel, and then of course it would sell right off, right?

My friends from college were wrapping up PhDs, moving on with their lives, and I felt like I was completely wearing a flat spot in my head from banging it against the wall. I’ll be honest—I shed some tears. But I never felt like giving up, because I also felt like I was getting increasingly closer. Always.

I mean, I think everybody’s who’s gotten a manuscript accepted has come to learn from experience that a good rejection is not an oxymoron. And about five or so years into it, I was really getting the good rejections—I’d graduated from the form letter to personalized notes. Editors were writing to tell me that my work had potential.

Of course, by this point, I’d learned just how rare it is to get any recognition at all from an editor. So I really tried to listen to what they had to say. Internalized it. Revised. Reworked.

I had one book in particular that was getting a lot of attention. (A YA novel about an artist who struggles to care for her schizophrenic mother while fearing her own artistic ability is an indicator that she, too, will become mentally unstable…hmmm…sound familiar?) But I kept hearing the same thing: the book was too internal.

So I started to devise scenes that allowed my main character to interact with the world around her. And each time I revised, I got a little closer to publication than I’d been with the previous draft. Eventually, I did sell that novel, now titled A Blue So Dark, to Flux.

In some ways, I think about that little girl at the rolltop desk, or the girl hauling around the tape recorder, pestering her brother to act out some story, and I think, yeah, absolutely—it seemed inevitable. But the thing is, I think if I hadn’t seen accomplishment, even in the rejections, the sheer weight of all that time (seven and a half years before I got that first acceptance) would have made my knees buckle.

I think those “good” rejections were what helped me keep the faith. If all I ever heard was just “no,” without ever hearing that I was doing something right, I really might have questioned what I was doing writing. But even in the rejections, I had encouragement. Editors cheering me on. It’s pretty fantastic, when you think about it.

I’m so low-tech. And I mean. Low, low, low-tech. I love vinyl. I prefer to write in notebooks. I have never used a cell phone for anything other than a phone call (and the cell I carry’s one of those disposable pay-as-you-go things that I refer to in jest as my “Gooseberry”).

In a lot of respects, A Blue So Dark is a low-tech book. I didn’t intentionally set out to nix technology…it just didn’t have any place in the novel. These aren’t characters with money to blow on high-tech anything. These are more like characters who worry about where their last ten cents is going at the grocery store. And Aura and her mother are artists who work on canvas or sketchbooks, rather than on a computer.

My second novel, Playing Hurt (due out from Flux in ’11) is also pretty, ah, low-tech. This time around, my main character, Chelsea, does at least carry a cell phone. We do see her send a few emails. But…the bulk of this novel takes place in rural areas of Northern Minnesota, where cells don’t get great reception.

Again, it wasn’t like I consciously set out to wrench all my characters away from technology’s grasp. But I must admit, I do find technology to be pretty impersonal. And for that reason, I don’t really find technology conducive to building relationships between characters.

I realize, though, that this is something of a tricky view to have when writing for teens. I was recently talking to a local teen reader who admitted that she spent more time texting than talking on the phone.

As someone who was in high school in the early to mid ‘90s, I have to admit, this seems completely foreign to me. Even though I wasn’t the world’s biggest talker, I still did spend plenty of time talking to my closest friends on the phone. Hours, sometimes. The idea of wanting to text instead of talk seems strange.

I know that, essentially, I view technology a little differently than my teen readers do. I keep that in mind so that I don’t ignore technology—I do bring it in, when applicable, to keep things “real.” But in all honesty, when I’m building characters and relationships, when I’m plotting the events of the novel, I’m looking for ways for my characters to interact face-to-face.

The thing is, if you’re writing contemporary fiction, you’re going to date your book—and not necessarily with technology. The makes of cars, the styles of clothing, what your characters watch on TV or read, what’s playing at the movie theaters…all of this dates a book.

If you’re writing about 2010, ten years from now, in some respects, it’ll look dated. So really, for me, using a little less technology wasn’t about trying to avoid dating a manuscript as it was about getting my characters to interact.

Because really, let’s be real: if it’s all text-messaging and emailing, you don’t get that face-time. And without personal interaction, your characters don’t have much of a chance to fight, or resolve conflicts, or fall in love.

See the reader guide for A Blue So Dark.