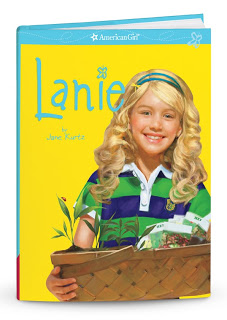 By Jane Kurtz, author of the American Girl Doll of the Year 2010 Books

I was doing author visits in Indonesia when I got a surprise email from the editor at American Girl that I worked with when I wrote Saba: Under the Hyena’s Foot (2003)(part of the short-lived “Girls of Many Lands” series).

She asked if she could call me to discuss another project.

I hit the reply button: only if you want to call long-distance to Indonesia.

(Once, I did get a call from a Simon & Schuster publicity person when I was doing an author visit in Kenya, and she wanted to tell me that the publicity response for River Friendly River Wild (2000) signings was “kicking butt.” It made me feel oh-so-glamorous.)

In this case, the editor said maybe she’d carry on the conversation via email.

Since I’d loved almost everything about creating Saba—including my editor’s strong support of including tough-but-true details for that girl living in Ethiopia in 1846—I was in thrilldom when I found out she wanted me to tackle creating the character of the Doll of the Year 2010.

After I got home, I flew to Madison, Wisconsin, to talk theme with the team. They wanted the new character of the decade to love the earth.

I showed them pictures of my always-outside childhood in Ethiopia and said if we want kids to save the earth, I’m one of those who thinks we have to get them outside, touching and smelling the earth…as I got to do as a girl. I showed the American Girl team an orangutan tee-shirt from one of the schools in Indonesia, where kids are involved in saving orangutan habitat. We had lift-off. 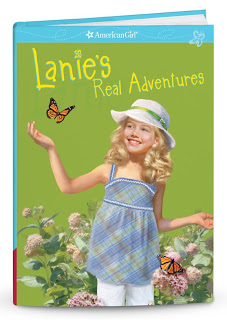 As I began to create Lanie’s story, I kept a couple of things front-and-center in my brain. One was that guilt is not a good long-term motivation of action. Another was how much I’ve been loving the funny spots in the novels I’m working on with my brother, who always makes me laugh. A third was the “power of one” emphasis of the Indonesia orangutan school, which I’ve also seen at work in the many kids who raise money for Ethiopia Reads and the first libraries for children in Ethiopia.

Soon, my girl began to speak to me. She said “thrilldom” a lot. She loved science and wanted to be a wildlife tracker and was wildly jealous of her friend who got to go to Indonesia to save orangutans. She thought she must have gotten outside genes when she was gestating…and the rest of her family got inside genes. She thought there was no way to save the wide wonderful world from a stamp-sized back yard in Cambridge, Massachusetts.

My new friend Jim McCoy (Nancy Werlin’s husband) helped me understand the bird wildlife in the Boston area (and the obsessions of birding), which led me to the insect life that sustains birds and the plants that sustain insects. Orangutans can’t live without trees. Monarch butterflies can’t live without milkweed. A kid can save animals from an urban back yard.

I love the adventure so far—from the girls who waited from 5:30 a.m. on for the American Girl store in Chicago to open and told me they too love science/camping/bugs to finding out about a real Lanie who saves orangutans! The adventure is even inspiring me to blog. Can’t wait to see what else I’ll discover.

Pie of the Month Club – Jane Kurtz by Heather Vogel Frederick from Set Sail for Adventure. Peek: “I got to go to Hollywood and sit in the Kodak Theater while he [Yohannes Gebregeorgis of Ethiopia Reads], was honored. Afterward, I said to Vanessa Redgrave, ‘Thank you for coming.’ She gave me a deep, earnest look and said, ‘No, thank you. Thank you very much.'”