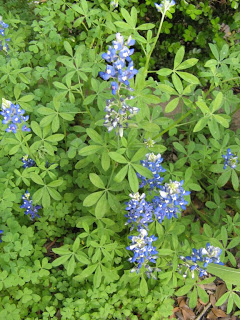 I’m going to be taking a short hiatus from Cynsations from now through April 30.

Not coincidentally, the month’s end is my “tweak” revision deadline for Blessed (Candlewick, 2011).

And for now, I’ll leave y’all to enjoy the bikers and even more bluebonnets!

Worried you’ll miss me? Bookmark this page, return on week days, and read: 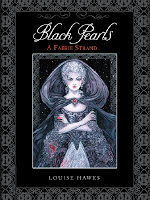 April 12: “On Overwriting: The pitfalls of ‘lyrical’ prose” by Louise Hawes. Peek: “How to explain my fall from lofty lyricism? Why, when I finally had a chance to step into Melville’s shoes, did I instead write nothing but deliberate, frivolous fun? Because, quite simply, I had children.”

April 13: Short Talk with a Prospective Children’s Writer by Astrid Lindgren from The Horn Book Magazine (1973). Peek: “Now I’ve made you cross. Fancy having the nerve to sit here feeding you such platitudes! Fair enough. But tell me, why does one come across so many children’s books that have to be translated into simpler language before they can be understood by the children their subjects are intended for?”

April 14: The Key to Unlocking Mystery and Suspense by Gail Giles. Peek: “…when I start a mystery/suspense novel, I think the audience needs to see what’s at stake, needs to know there’s something to fear, needs to get a quick, but good look at that ugly rat, teeth bared, ready to launch himself at the reader’s face.”

April 15: Where Ideas Really Come From by Tim Wynne-Jones. Peek: “Over the years I’ve found all kinds of ways of answering this important question. Mostly, I lie. I say things like, Ideas come from the Idea Store. A kid once told me he had been to the Idea Store. Another liar, I suspected. Except that he could describe it in detail.”

April 16: Can Children’s Poetry Matter by J. Patrick Lewis from Hunger Mountain. Peek: “Children rarely gravitate to poetry on their own. It’s an acquired taste. They must be introduced to it early and often by their teachers and parents, the critical influences in their lives.”

April 19: Barbara Slate: The ABCs of Graphic Novels by Lauren Barack from School Library Journal. Peek: “When I started in the ’80s, there were only two women writing and drawing comics, because about 95 percent of readers were boys and about 5 percent girls. But Jenette Kahn, president of DC Comics, was looking to get girls. It was a huge untapped market.”

April 21: Debut Teen Author Brews a Tasty Romance: Interview with Kristina Springer by Linda M. Castellitto from BookPage. Peek: “Anyone who’s worked in a service-industry job will nod in recognition while reading passages about snarky customers and cranky coworkers—and anyone who’s been a teenager will relate to the romantic tension that builds as Jane makes matches for her friends but doesn’t realize she’s overlooking her own perfect romantic partner.”

April 23: Virtual Exhibition: Books for/Books from Africa from IBBY. Peek: “The IBBY exhibition is envisaged as source of information for quality African children’s books produced for teachers, researchers, parents and for all those interested in children’s literature” See introduction, forward, reviewers’ profiles, picture books, chidlren’s fiction, folk tales, YA fiction, and others.

April 26: My Dark Deep Past by Brent Hartinger. Peek: “So I decided to write. I saved up $2000 from my summer job as a lifeguard, and I lived on that for the next nine months while I wrote my first novel (I’m still proud that I could live on so little for so long!).”

April 27: Motivating Young Readers: An Interview with Famed Children’s Book Author Joseph Bruchac by Claus E. von Zastrow from Public School Insights. Peek: “Bruchac spoke …about strategies for motivating children to read. He offered ideas for helping struggling readers, resources parents and teachers can use to combat stereotypes in children’s literature, thoughts on the promise and perils of the internet, observations the shortcomings of standardized assessments, and a preview of his forthcoming books.”

April 28: Now and Forever: The Power of Sex in Young Adult Literature by Tanya Lee Stone (PDF). Peek: “Oddly, sex explored within the context of fantasy seems to ruffle fewer feathers. For quite some time, we have been able to enjoy Tamora Pierce’s and Francesca Lia Block’s wonderfully sexy characters without much, if any, backlash. Is that because it seems safer to wouldbe censors to frame sexuality in non-realistic settings?” 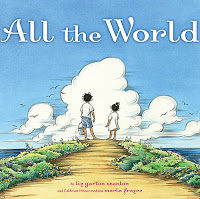 April 29: To Cheer or To Covet by Liz Garton Scanlon. Peek: “Actually, this is probably the conundrum of the artist, not the writer exclusively. That it is our own community–the community that inspires us and lifts us up — that can also drive us ugly-green with envy.”

April 30: Choosing Your Own Path by R.L. LaFevers from Shrinking Violet Promotions. Peek: “…whatever your creative process and working method is, chances are there is a very legitimate path to success that you can emulate.”

The winner of the 10th Anniversary Giveaway of my debut picture book, Jingle Dancer, illustrated by Cornelius Van Write and Ying-Hwa Hu (Morrow/HarperCollins, 2000), was Gina in North Carolina. Thanks to all who entered and celebrated!

This week marks over 2,000 posts here at Cynsations. Any efforts to recommend and/or link to the blog while I’m in the revision cave will be deeply appreciated. Thank you!