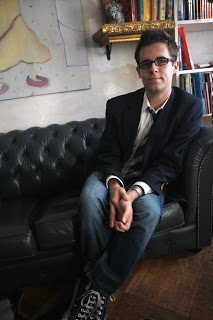 Your bio mentions that you began work at Scott Treimel NY literary agency the same year you completed your degree at Wesleyan University. At what point did you realize that working in children’s publishing was something you wanted to do?

I worked as Wesleyan Press’s permissions manager and knew I wanted to pursue a publishing career. I sort of fell into juvenile.

Shortly after starting at STNY, I attended a Clarion party, in the middle of which I was pulled aside to where my boss and an editor were reviewing some artwork. They were so excited, giggling like kids. That’s when I knew I was in the right biz.

I’m fascinated that your degree also included Russian Literature, and I have always been in awe of stories that come from this amazing country. Are there elements of Russian Literature that you particularly admire, and does your expertise in this area affect the kinds of books you enjoy working with and/or writing?

There’s a lusty passion in Russian writing, especially Dostoevsky. I love his blowout dinner scenes where everyone pulls their hair and curses. I appreciate that kind of bombast and choreographed chaos.

Also the stories of Gogol and Pushkin have an ethereal quality that reminds me of Bridge to Terabithia [by Katherine Paterson (HarperCollins, 1977)] and Tuck Everlasting [by Natalie Babbitt (FSG, 1975)].

The Russians also were phenomenal with doubles and the use of subtexts (like Tolstoy reading Flaubert, or Dostoevsky reading Balzac), two devices I work at in my own writing, and am always excited to see come across my desk.

You wear an impressive number of hats in the children’s publishing business and your own young adult novel, Girl Parts (Candlewick, Aug. 2010), hits the shelves this year. How would you describe the experience of being on the author-side of publication, and what would you say has been your favorite aspect of this new endeavor?

It was terrifying when my boss (also my agent) read my manuscript literally ten feet from my desk. Every time he went “hmm,” I hit the ceiling.

But I think being an agent or editor is the most eye-opening job a wannabe author could have. I’ve learned so much about what makes a book successful from conception to promotion, both artistically and fiscally.

Recently, I did a reading for the folks at Candlewick, my publisher, and that was an all-time high.

I thoroughly enjoyed catching up on some of your recent tweets on Twitter. I laughed at your post about not being able to relax on a Sunday unless you’ve read 20 queries. It made me realize the heavy sense of expectation that agents must be under to work through the submissions pile.

For many writers, the idea of the slush pile causes night terrors. Can you demystify the process for us a little bit and also tell us what qualities you look for as you read?

When I receive a query, I look for three things in this order:

Firstly, did the author follow our guidelines? It may seem picayune, but it’s a litmus test of professionalism.

Secondly, I look for a strong, coherent story concept. If it’s too familiar, or too generic (i.e. “loner kid comes of age and struggles with bullies and first love”), I know we’ll have trouble selling it.

Finally, I look for precise, tight writing. If the voice is original, all the better.

Professionalism, strong story, strong writing. That’s what I (and I think all agents) look for.

Approximately how many queries do you receive each month at Scott Treimel and of those, what percentage may earn a follow-up from the agency?

We receive roughly three-hundred queries a month, and 90% are immediately rejected. Of the sample pages we read, we ask for full manuscripts maybe 20% of the time.

You have a very active online presence both as a literary agent and as a writer. Do you feel that it is more important for writers of certain genres to be accessible online or is blogging, tweeting and facebook-ing an important outlet for those writing for every age of reader?

For authors of teen books, it’s especially important. The more places readers find you and your work, the better. If you’re not wild about journalistic blogging, there are more creative ways to exploit the web. For instance, for Girl Parts, I’m developing blogs and twitter feeds from the characters’ points of view. However, as an unpublished author seeking representation, your time is best spent developing your craft. Write first, tweet later.

What qualities and sets of skills do you think make an agent successful in his or her career?

I think it takes longer than I’ve been around to know the answer to this question. But from what I can tell: total commitment to your author, to the best book possible, and to working with publishers to create the best atmosphere for the author’s success. You have to be your client’s creative consultant, hired gun, best friend, therapist, and toughest critic. Like any job, it’s also great if you love what you do. Which I do.

In your bio, you mention that you also work on developing manuscripts. How important is it that a writer be willing to make revisions to a story, and do you suggest that writers state that willingness up front in a cover letter or is that something better discussed if a follow-up conversation takes place?

We take it as a given that writers will revise. More than ever, agents must develop manuscripts because editors can’t afford the risk of purchasing underdeveloped material.

It shocked me to learn how many drafts a manuscript goes through before it’s acquired, let alone hits the shelves. Even authors with fabulous careers and awards still need at least one fresh pair of eyes after a first draft. It’s just part of the process.

Are you currently accepting unsolicited submissions? If so, what kind of story would you love to see on your desk this year, and what does your ideal submission packet look like?

We consider all submissions (query + first 2500 words) via our website: ScottTreimelNY.com. I’m personally looking for young adult books, and I love literary as well as sci-fi (and combinations of the two make me swoon).

I’ll take this opportunity to say we’ve seen far too many protagonists with super powers, secret family curses, and latent magical abilities. In other words, stories where a typical kid finds out, “Surprise! You’re special.” Unless it’s a truly original take on this concept, we have to say “no” because these stories are too common.

And last, what are some of the personal or professional goals you have for attending SCBWI Bologna and the Bologna International Children’s Fair this year? Is this an important annual event for you?

Though I’ve done BEA in New York and L.A., and the London Book Fair, this is my first trip to Bologna! I’m excited to meet with STNY’s fantastic overseas co-agents (some for the first time), as well as non-U.S. editors and publishers. I would love to find non-U.S. authors looking for representation in the United States and Canada as well.

Thank you so much, John, for taking time to share your knowledge and expertise with us. We look forward to learning great things from you at this year’s SCBWI Bologna event.

John M. Cusick graduated from Wesleyan University in 2007 with a Bachelor’s Degree in English and Russian Literature. He began his career with STNY that year. He made his first sale in February 2009, to Flux Books. In addition to handling his own clients, John reads submissions, develops manuscripts, reviews contracts, and aids in contract negotiations. He also manages STNY’s international business. He attends the London Book Fair and Book Expo America, and is a member of the SCBWI and an Associate member of the AAR. His young adult novel, Girl Parts, will be released by Candlewick in August 2010.

See also Interview with Literary Agent John Cusick from editors, agents and blogs, oh my! Peek: “As far as juvenile and teen, I adore Lewis Carroll and M.T. Anderson (wouldn’t that be a fun tea party?).”