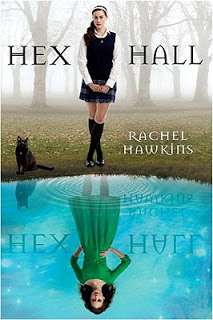 Rachel Hawkins is the first-time author of Hex Hall (Disney-Hyperion, March 2, 2010). From the promotional copy:

Three years ago, Sophie Mercer discovered that she was a witch. It’s gotten her into a few scrapes. Her non-gifted mother has been as supportive as possible, consulting Sophie’s estranged father–an elusive European warlock–only when necessary.

But when Sophie attracts too much human attention for a prom-night spell gone horribly wrong, it’s her dad who decides her punishment: exile to Hex Hall, an isolated reform school for wayward Prodigium, a.k.a. witches, faeries, and shapeshifters.

By the end of her first day among fellow freak-teens, Sophie has quite a scorecard: three powerful enemies who look like supermodels, a futile crush on a gorgeous warlock, a creepy tagalong ghost, and a new roommate who happens to be the most hated person and only vampire on campus.

Worse, Sophie soon learns that a mysterious predator has been attacking students, and her only friend is the number-one suspect.

As a series of blood-curdling mysteries starts to converge, Sophie prepares for the biggest threat of all: an ancient secret society determined to destroy all Prodigium, especially her.

I’m the first to admit that my road to publishing story is…well, insane. I was teaching high school English and going to grad school when I first started working on Hex Hall. Then both of those things fell through in a fairly spectacular manner.

(There was red tape! And pepper spray! And angst!)

So I quit my job and decided to finish writing my book. I had no back-up plan. My goal was to finish the book, get an agent, and sell it within six months.

For four months, I hacked away on the book that eventually became Hex Hall. Thanks to my husband, who cashed out his retirement check to support me, I didn’t have to get another job.

I’d started writing lots of books before, but I’d never actually attempted to finish one before.

I was lucky enough to land an agent pretty quickly once Hex Hall was finished, which left me two more months to fulfill the whole, “Sell the book, don’t starve to death” part of my plan.

My agent, Holly Root, and I did a little polishing on the book, and it went out into the world the first week of April 2008. And then I spent the next week crying, laughing, and basically scaring my entire family. We submitted to thirteen houses (I still have the spreadsheet I made!), and we got a couple of rejections pretty early on.

Hex Hall was supposed to go to auction on April 22. We were a week away from my six-month deadline. That whole day, I was Crazy Rachel. I worked out, which, if you know me, is a sure sign that I was freaked out.

Once I’d exhausted my supply of Denise Austin DVDs, I sat on the couch staring at my cell phone. Then my husband sat next to me so that he could stare, too. This obviously sent me from Crazy Rachel to Possibly Homicidal Rachel. I sent him to the store to get bottled water, and not five minutes after he left, the phone rang.

It was Holly, and the first words out of her mouth were, “Are you sitting down?”

I had waited my whole life to hear those words.

So I told her that yes, I was indeed sitting down, and she replied, “You’re going to freak out.”

“I love freaking out!” I answered. Yes. I seriously said that.

And then she told me that Hyperion had come in with a pre-empt offer, and that they wanted all three books, and I was going to be able to write full-time and not starve to death.

After all that, my memories are a little fuzzy, but I’m pretty sure I shouted a bad word (but, you know, joyously), and then I cried.

I’ve always had a deep love for The Spooky. My mom was a big fan of old-fashioned scary movies, like “The Innocents” or “The Picture of Dorian Gray,” and I grew up watching those with her. Then as I got older, I got very into R.L. Stine books (Fear Street! Loved. It.), and Christopher Pike, and some of the earlier Stephen King.

But far and away my favorite author was Lois Duncan. I’m pretty sure I read everything she ever wrote. She had the coolest way of telling stories about real, believable people caught in fantastic (and sometimes horrific) situations.

And her books dealt with such out there stuff! Astral projection! Immortality! A hillbilly witch who murdered your cousins and now wants to marry your dad!

I’ve always thought it was kind of funny how drawn I am to paranormal stories. I’m like the least dark person ever (the sheer amount of pink in my closet can attest to that!), and I’m not a big believer in the paranormal, either.

But I think there’s something about the heightened emotions of paranormal stories that really resonates with me, both as a writer and a reader. In a lot of paranormals, the stakes really are life and death.

And hot boys can be intimidating enough to teenage girls. But hot boys with super powers? Forget about it!

From Hyperion Books: “Rachel Hawkins was a high school English teacher before becoming a full-time writer. She lives in Alabama, and is currently at work on the next book in the Hex Hall series. To the best of her knowledge, Rachel is not a witch, though some of her former students may disagree….”

“Hawkins’s proficient and entertaining debut is jam-packed with magical creatures and mystery…the story is well paced and plotted with tween-friendly humor and well-developed characters, particularly awkward but compassionate Sophie. The ending satisfies while paving the way for future books.” —Publishers Weekly

Read the prologue to Hex Hall from J-4 Book Club.