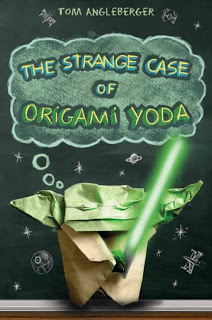 It really begins when I was kid. A runty little “Star Wars” loving kid. Playing with action figures. Collecting cards. Dressing up as a Jawa for Halloween.

But let’s skip ahead a couple of decades. I’ve still got the action figures and the cards, but not the Jawa costume.

One day I saw an origami Yoda online. A beautiful one. Possibly the famous Kawahata model.

Of course it grabbed my attention. In addition to my deep, pure and true love for “Star Wars,” origami has always interested me, although, I’ve never been particularly good at it.

The origami Yoda I saw on the Web that day seemed way beyond my skills. But I decided to try and make a really simple one of my own. I messed around a little and came up with something very basic, but definitely Yoda-like. Plus, it made a perfect finger puppet.

And there was the spark! The story was forming: There’s this weird kid…and he makes an origami Yoda…and he puts it on his finger and makes it talk to people…and it speaks with the wisdom of Yoda, solving all manner of middle-school difficulties.

The book started to take shape…a shape not unlike The Moonstone. Multiple narrators, each one giving their little piece of the puzzle. And a main narrator, bent on pursuing one question: Is Origami Yoda real or just a hoax?

The manuscript took the usual roller coaster ride and then–with the help of my agent Caryn Wiseman–found a home with an wonderful editor, Susan Van Metre at Abrams/Amulet.

But disappointment loomed. Susan didn’t think we were going to be able to use Yoda, who after all is the rightful property of Lucasfilm.

Things looked bad. But I resigned myself to it. The whole getting-a-book-published thing had been really hard on me already. The waiting, the rejections, the SASE’s that never came back.

There were times when I thought that nothing good that might come would ever outweigh the bad times I had been through.

But I was wrong.

Here comes the fairytale part. See, Susan hadn’t given up. Like Han Solo ignoring the odds of flying into an asteroid field, she had sent my little story to Lucasfilm.

And legend has it that there’s this kid. A kid, I’ve never met, but who I can only assume is awesome in every way.

His mom is in charge of Star Wars books. She gave him my manuscript to read. Back before the illustrations. Before the beautiful cover. Before I added the John Hughes movie moment to the end.

The kid read through this pile of paper and said, “Let him do it.”

The Strange Case of Origami Yoda by Tom Angleberger (Amulet, March 2010): a recommendation from Greg Leitich Smith from GregLSBlog. Peek: “Told in vignettes that illuminate and test Origami Yoda’s powers of prescience and the Force, …a brilliantly funny and zany novel, full of heart and wit and middle school agnosticism. Enjoy it, readers will.”