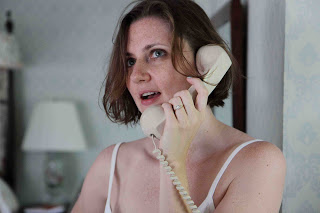 I write in the bay window of my garden-floor brownstone apartment in Brooklyn. We don’t get much light on at this low level, but what light does come in dapples my overstuffed pink flowered chair each morning through early afternoon. I sit right in the middle of it so I can create.

My schedule is steady when I’m on a book deadline (like I am now!). I usually start the day with yoga or a gym class or a walk outside to get iced coffee (cream and sugar, please). After I’ve had a little interaction with the world, I sit down in my chair and begin.

In this sunlit seat, with stillness all around me, I can lose myself in a character’s thoughts. There’s some noise from the street—people walking to the nearby park, children’s laughter, an overheard snippet of cell phone conversation, the rattle of glass as someone comes to collect the cans from my recycling bin—but mostly I’m alone with my fiction. The ambient noise may even help things, and it has entered my writing on more than one occasion.

For example, there was a day when a package arrived at my door. I had to stop writing to sign for it. I had been in the middle of writing a long phone dialogue scene, and I couldn’t figure out how the character would get off the phone when the emotional pitch of the conversation was so high. Then the doorbell flusters her in the middle of it all. A perfect exit strategy.

I don’t let my butt leave the chair until I have 1000 words written. They don’t have to be good words, but they have to exist on the page. Sometimes I get hungry, but that just spurs me on. I try to be done by 2 p.m., and usually that works just fine.

Then I have a lunch break, often set to “The Oprah Winfrey Show,” and move into magazine writing or work for iheartdaily.com (a daily newsletter for teenagers which I run with co-founder Anne Ichikawa). Those are the other hats I wear in this creative life.

The timing works for me because once I have my fiction work done, the rest feels like cake. In my non-fiction writing, I don’t have to call on so much of myself, I don’t have to plunge into emotions or imagine reactions of characters whose motivations are different from my own.

So the hard work is done each day by early afternoon (ideally), and then I sit down in the chair again, this time with the phone at my side in case I have to conduct interviews or talk to my editor. My very posture is different when I work on magazine writing—I sit more upright, ready for action and very much in the present, not as sunken into another world.

I’ve gotten so attached to my chair that even though we plan to get a new couch soon that absolutely will not go with this upholstery, I can’t get rid of it. One day I may move into a bigger apartment and hide it in a guest room, but this seat will always be part of my writing. 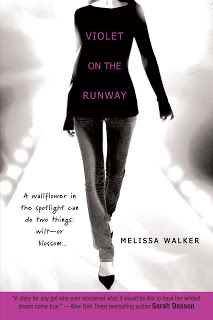 When I got an offer on my first idea for a novel, Violet on the Runway (Berkley Trade, 2007), I was without an agent. I had contacted an editor directly, told her about my idea, submitted two sample chapters along with many published magazine clips, and been offered a deal.

It was a whirlwind fairy tale, but I knew that before signing, I wanted to find an agent—someone to guide me through this new part of publishing.

I talked to friends, who recommended people they’d worked with and liked, and I ended up whittling my choices down to three. There was one newcomer who was very Hungry, one Power Player who talked like Ari Gold from “Entourage,” and one Doug Stewart of Sterling Lord Literistic.

Doug met me for a drink at a local bar (we live in the same neighborhood in Brooklyn) and brought me two young adult novels he’d represented. He told me in very thoughtful terms what he liked about my submission and why he thought we’d work well together. It was all very calm (unlike my interactions with the Power Player and the Hungry one).

The books he gave me were both wonderful—really well written. That made me feel like Doug knew quality material and represented the best authors he could find. It also made me feel flattered that he thought my writing was in the league of these other authors he represented.

After I signed with Doug, the Violet deal turned into three books, and the money went up significantly (it had started very low). I was instantly happy I’d decided to get an agent. Phew!

He also knew how to hold onto foreign rights, which earned me more than my advance in the case of Violet (it has sold in France and Russia), and also dramatic rights (it has been optioned for television). In the initial contract I was offered, none of those rights remained with me. It takes a good agent to negotiate those parts! 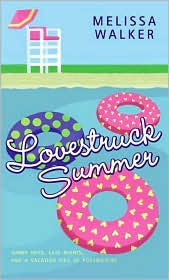 All through my book-publishing life, which spans three years now, Doug has been there to hold my hand and be the bad guy if I need him to (with late checks or publicity snafus or other incidents that fall into the category of “things I want to fix but don’t want to handle!”).

He’s also been the good guy. He’s been there to advise me on new book ideas, how to build myself as an author who’s here to stick around for more than her first book, how to figure out when less is really more with an editor or contract. Doug is responsive to my every question, and though I try not to bug him with things, I have a feeling he’d be infinitely bug-able just because he’s so accessible and open to my queries and musings about the publishing world.

Not to get all self-help-y, but in the end, Doug Stewart is the right agent for me because he believes I have talent and he believes I’m a valuable part of the YA book scene. And when he believes it, publishers believe it, too. And maybe, just maybe, I can believe it.

My next book will be out in early 2011! It’s called Small Town Sinners (Bloomsbury), and it’s the story of Lacey, 16, who’s grown up in a Christian community and always wanted to star in her church’s Hell House, a haunted house of sin. But when a childhood friend reappears, she begins to question her faith and all she’s been taught.