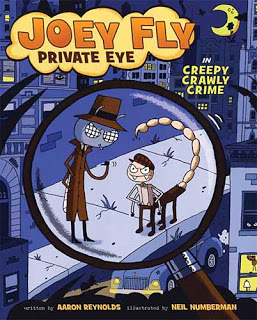 Neil Numberman is a termite currently residing in New York City. Joey Fly, Private Eye (Henry Holt, 2009) is his first graphic novel, but he is also the author-illustrator of the picture book Do NOT Build a Frankenstein (Greenwillow, 2009).

Aaron: I love bugs and I love mysteries, so this seemed to be a great smash-up of those two ideas.

What challenges did this graphic novel present?

Aaron: For me, the biggest challenge has not been with this book, or even the second (Joey Fly #2 is finished, and Neil is in the process of illustrating it now). It’s been deciding where I want to take these characters from here. Developing a series is tricky, because I want each book to stand alone, yet to mesh and gel with where the characters have been before.

Neil: For me, this was the biggest project I’ve ever been involved in by a long shot. The most I had ever done before this was some four-page comics and a thesis in school that involved about twenty pieces.

Making sure to keep the character design consistent throughout was a tedious process, too. To really polish a character, it can take hundreds and hundreds of drawings, because you need to work out all the aspects of that character that aren’t working.

Look at the early “Simpsons”! They look so weird!

So I tried to draw Sammy and Joey as much as I could before I started the pages.

Aaron: The writing is much different because I don’t write a manuscript like I would for a picture book. I write a script. Like, for a play or a movie. It looks like this:

Caption: And I was about to dig into a day-old corned leaf on rye, extra mayo…

Sammy: You gonna eat that?

Joey: Slow down, dustbuster. I haven’t even started yet.

Caption: …when a shadow fell across the table.

Shadow: You are Mr. Fly?

Caption: The shadow was eight-legged and fuzz-covered.

Caption: It had the stench of death…or maybe it was the week-old aphids on the all-you-can-eat buffet. It’s so hard to tell the difference sometimes.

That’s a sneak peek from Joey Fly 2: Big Hairy Drama. I write the whole book like that, including stage directions and details about the action along the way. Then I break the scenes into panels, the way I think each shot makes sense for the telling of the story…like this:

Panel
Joey: Slow down, dustbuster. I haven’t even started yet. Sammy: Just asking.

Panel
(a shadow blocks our view)
Caption: …when a shadow fell across the table.

Shadow: You are Mr. Fly?

So, the writing is much different than a picture book. The genre gives you much more room to stretch out and tell the story, much like a writer of novels must feel. But I get a better chance to develop a vision for the end product, because I know I’ll have picture telling the story too. So I can also include stage directions, character descriptions, descriptions of action sequences that come about through the story…stuff the reader will never see, but which guide the illustrator. It’s much more like writing a movie.

Neil: With spot illustration in prose, I get to select an important part of the story, and put a broad visual take on it. In a graphic novel, it’s important to the story to get everything across while pacing it well. 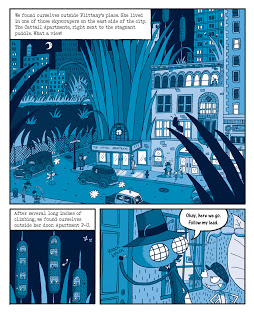 What advice you have for other authors/illustrators on the creative front?

Aaron: For my unpublished friends, I would say: Persistence is everything.

I got over 250 rejection letters (on different manuscripts, not all on the same story!) before I landed my first deal. And, even now, I still get them (371 to date, and counting). Got one last week, in fact (though, these days, my agent gets them instead of me!).

Rejection isn’t this horrible thing that you hope doesn’t happen, it is the way to publication. The path to successful publication is paved with rejection…I firmly believe that.

If you love it, and it’s really what you want to do, then just enjoy going through the ringer.

What were the challenges of placing this project? 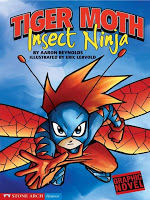 Aaron: Well, it wasn’t accepted by Henry Holt as-is. It was originally a short novel. But the editor saw it as a graphic novel, and I liked that idea since I had worked on graphic novels before on my series Tiger Moth, Insect Ninja (Capstone) (lots of bugs in my book, I’m realizing). So, I had to re-write the whole book as a graphic novel.

Sometimes you are asked to do a lot of work before you even have a deal, so you have to make sure you really like the new idea before committing all the time on something that could just as easily end up a rejection.

For me, this was a no-brainer. Joey Fly was meant to be a graphic novel, and as soon as my editor suggested it, I knew it was right.

Neil: Henry Holt just knew we’d be a good fit for this project, and I couldn’t be happier!

How did you two get connected?

Aaron: Like most book arrangements, it was through the publisher. I never met, spoke, or even e-mailed to Neil until after the book was released.

In fact, when I first saw Neil’s illustrations…I was not in love with them. I had my doubts about whether a main character who has no mouth and no pupils in his eyeballs could sustain a whole graphic novel. Thankfully, my editor p’shawed my objections and went ahead with Neil anyway.

I’m so glad she did! I can’t imagine Joey any other way…Neil’s handle on the characters and the world he’s created for them is so spot on! You learn to trust the process, your editor, and these other gifted artists that you get thrown into the mix with. It’s a cool thing.

How are you going about connecting the final book to kids and gatekeepers like educators, parents, and teachers?

Aaron: I love being with kids and hearing from them and getting their reactions. So I do as many school visits as I can. Visiting librarians and teachers, either at conferences or on blogs like this are also great chances to connect folks to the book.

I’m thrilled to see the embrace that librarians are giving graphic novels these days as a vital and valuable genre. To see libraries opening up whole sections for this exciting visual book medium is very exciting.

Neil: I’ve been traveling all over place getting the word out about Joey Fly, from small book stores in Connecticut to libraries in Hawaii. I love getting kids to draw Joey and Sammy, and then creating their own bug characters for Bug City!

What can your fans can expect from you next? 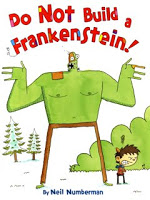 Aaron: More Joey Fly is on the way! I also have a mock-horror picture book coming out called Evil Carrots about a bunny who thinks he’s being stalked by sinister root vegetables.

Neil: Well, my first picture book just came out in time for Halloween, called Do NOT Build a Frankenstein! (Greenwillow, 2009), and I’m currently hard at work on Joey Fly 2, which I’ll be wrapping up soon!