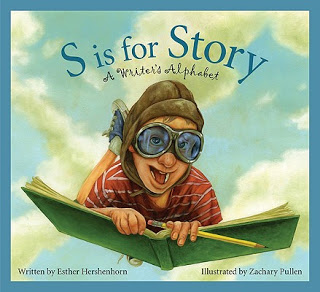 So far, what’s the most fun you’ve ever had working on a book? Why?

I know, I know. We fiction writers hear that writing nonfiction can’t possibly be “fun.” But I am living proof now: it simply isn’t so.

In fact, I can honestly say I had the most fun I’ve ever had working on a book while writing my newest book, S is for Story: A Writer’s Alphabet, illustrated by Zachary Pullen (Sleeping Bear Press, 2009).

I’ve been thinking on this truth the past few weeks as I readied a fall talk for children’s book writers – “N is for ‘Never-too-late-to-learn-something-new:’ One Fiction Writer’s (A-to-Z) Journey Through a Nonfiction World.”

S is for Story grabbed my heart and wouldn’t let go, as did my picture books and middle grade fiction.

It required the very best telling of a very good story, as did my fictional titles.

My emotional connection to the story was every bit as essential as it was when telling my fictional tales.

And that, I see now, is why my fun grew exponentially.

S is for Story celebrates the all-important reader-writer connection.

It’s an A-to-Z journey through a writer’s life and process.

It just so happens I live and breathe my entries. My writing, teaching, and coaching informed every single sidebar.

While writing this book, I immersed myself daily in the real truths and facts of my beloved and treasured children’s book world, the one in which I’ve lived now for some thirty-two years.

The fun began once Sleeping Bear Press accepted my proposal. I brainstormed my twenty-six letter assignments with Ms. Jenny Vincent’s talented 2008 fifth graders at Chicago’s Louisa May Alcott School, where I’ve worked with young writers the past five years. It was they who gave me the perfect M word, to sit smack dab in the middle of my book. (Hint: think wands and top hats and bunnies with long ears.)

I envisioned my book as a gift-wrapped school visit, folded and packaged and tied up with a bow.

The contents, when opened, would shout “Writers are readers!”

I was writing to inform, affirm and ready. What better “show, don’t tell” than to use children’s authors and their titles and characters to support my text?

Once I chose my A-through-Z words, books of all sizes soon covered my apartment’s every room–piled high, stacked by subject, seemingly multiplying while I slept at night. 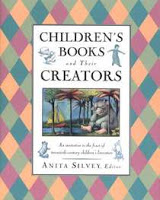 I was a child at play, making my way over and around and through and beside, bookmarking pages, turning down corners, discovering delicious telling details. And when I wasn’t reading? I was Googling non-stop, then tracking down morsels at my Chicago Public Library.

I’ve always likened writing a novel or picture book to solving an acrostic. The back-and-forth-and-all-around flow of the discovery process as one follows the clues is much like the flow of discovering one’s story. And the same is true for a nonfiction story.

For instance, the Egyptian origins of the alphabet led me to the creation of vowels and Braille, then Sequoyah and Pig Latin and Lewis Carroll‘s words to start at the beginning and go on until the end. B found me lost in the Dewey Decimal system and Gutenberg’s printing press, then on to swim in waters with an assortment of characters. Fairy tales led to genres, which led to Heroes and Heroines, which lead to ideas an journals, to letters and notebooks.

I was living and breathing children’s books and writing.

I earnestly subscribe to noted psychologist Mihaly Csikszentmihalyi‘s Theory of Flow. The former University of Chicago professor has spent his life’s work studying what makes people–truly–happy, and “truly” is the operative word. His definition of “flow,” as in “in the flow,” is the experience of optimal fulfillment and engagement.

“Flow,” he wrote, “whether in creative arts, athletic competition, engaging work, or spiritual practice, is a deep and unique human motivation to excel, exceed, and triumph over limitation.”

Believers note that when flow is occurring, the ego drops off, time flies, actions, movements, and thoughts follow inevitably from previous ones.

I am an “in the flow” person, whether writing a book about a 19th century limner or readying a manuscript or a lesson on plot or shaping a teachers’ writing workshop or a young authors visit or cooking up chicken soup or an interview answer.

I was–truly–in the flow, though, while writing S is for Story.

I was writing the book I live and breathe.

The key word in the above question? “Thrive.”

I often tell students and writers and the public at large: there are all sorts of currencies in this world of ours.

Were dollars and cents the only determinant of one’s life’s work’s success, I’d unfortunately be in a whole lot of trouble.

Uncovering my voice, telling my story, connecting with young readers and especially fellow writers: this is the Stuff of my ongoing writer’s journey and its inevitable yet surprising satisfactory endings.

I learned early and often there were no guarantees–think of the books that had Sept. 11, 2001 publication dates. As for competition, I’m continually amazed by and choose to focus on the generous spirit that pervades my children’s book world.

Which is not to say that it wouldn’t be nice if the capital S in Stuff referenced above were a $. Because it would be nice. It’s simply that I knew from the get-go that writing children’s books would not provide a true means of support. I was always prepared, if push came to shove, to earn my keep in other ways.

The trick, for me, was to make sure those “other ways” were somehow connected to the children’s book world.

I happen to live inside concentric circles, each a neighborhood in its own right, but part and parcel of, as well as connected to, the grander world of children’s books.

I move in and out of these circles daily, weekly, sometimes even hourly, learning and growing, receiving and giving, paying kindnesses forward, creating in many ways that wondrous “flow” of which I spoke in an earlier answer.

Some days I’m in the schools, visiting classrooms, facilitating young-writer workshops, teaching teachers about writing. Some nights I teach adults how to write for children–picture books, novels, and nonfiction, too.

In between, I coach children’s book writers, wherever they are in the writing process, helping them discover and tell their stories. The common denominator: children and children’s books.

I recently joined five fellow children’s book authors who also teach writing to create the group blog Teaching Authors. I’m an author who teaches; I’m a teacher who authors books. Each ensures, at any given moment, I’m in the flow, alive and thriving.