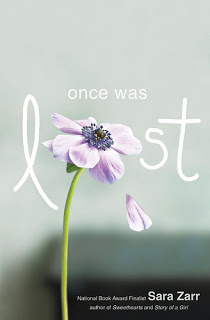 You last visited Cynsations in June 2009 as part of the Craft, Career & Cheer series. Welcome back!

Congratulations on the release of your latest novel, Once Was Lost (Little, Brown, 2009)! In your own words, could you tell us about it?

Thanks for having me back! Once Was Lost is about a kidnapping in a small town, seen through the eyes of a fifteen-year-old pastor’s daughter (Samara) who is already in the midst of a crisis of faith.

The local tragedy catalyzes a series of emotional and spiritual challenges for Sam as she tries to reconcile what she’s always believed about her family and about God with the plentiful evidence of a broken world.

Oh yeah, there’s also a boy, the older brother of the missing girl who may be a good friend or may be dangerous. Read it and find out!

The challenges were numerous and daunting, but the most difficult thing was finding Sam’s voice. I’d been dabbling in the novel since 2002, and had about 100 pages of it written as an adult novel with alternating POVs: the dad, the mom, Sam, the youth group leader, and the hardware store owner.

When I began shaping it into a YA novel, it was from Sam’s point of view but in third person past tense. I wanted a kind of emotional distance because she is depressed, basically, but it came across so flat that my editor worried readers wouldn’t feel the necessary connection to Sam.

I remember sitting at my computer and notepad saying, “Talk to me, Sam. Talk to me! Who are you?” and kind of pulling my hair out.

For awhile there, I truly worried I wasn’t going to figure her out. But, as you know, if you sit with a writing problem long enough, it is eventually solved.

In the end, it’s a first-person present-tense story.

What did it teach you about yourself?

I learn this with every book, but then I forget it: the resources are there.

Inside me, or out in the ether, or however you look at it. When I feel empty and unable to give anything more, I have to remember that I’m not. I might be tired, and it could very well be time to take a few days off, but if I start thinking, “I can’t. I’m done. I got nothin’, that’s all she wrote,” I’ll become paralyzed and miserable.

I learned (and continually learn) that the answers for the writing process are there in the work and in myself. Sometimes they’re like frightened children, and beating the walls to get them to come out is counterproductive. I have to whisper and wait quietly and calmly.

I remember saying a few years ago that if someone tried to gauge faith in human society by reading books for young readers, they’d come to the conclusion that it was to be feared, that its leadership was almost uniformly corrupt and hypocritical, and that only the rarest and most unusual of families integrated religion into their lives. But, as I discussed in an interview with author Donna Freitas, this has changed of late.

What do you think brought us to that first, narrow place? What accounts for the change now? What do you anticipate in the future?

That’s a great insight, Cynthia. There are probably a lot of reasons we got to that point, one of which is that religious communities have not done a great job supporting and encouraging their artists.

Somewhere along the line, art got separated into the sacred and the secular—which is fine, and in some cases, appropriate, but some people became afraid and put this wall up around sacred art and basically said, “This is for Us and the secular is for Them and the only way to protect and control Us is to separate. So not only will we have our sacred art for iconography and liturgy and worship, but we can also have holy-fied, sanitized versions of secular art just for our consumption and not have to deal with all of that messy, complicated, uncomfortable stuff that comes with being human.”

Then you have this whole industry built around a fortress mentality where the religious music and books and art are weeded out, tightly controlled, and sold in their own marketplace to a very specific audience.

Therefore, when a person of faith, like me, who grows up in church feels like, “Oh, I think I might want to write,” we’ve been conditioned to believe that the correct place for that is in a segregated/subculture religious marketplace.

If we don’t feel like we belong there or are not welcome there or are misunderstood there, we go out into the mainstream. But then, we’ve been told, or we observe, that faith stories or stories that might involve something religious or spiritual aren’t welcome, so that might be lead to self-censorship—we assume mainstream publishing doesn’t want or get faith stories, so we don’t write them. Vicious circle ensues.

I think all that is definitely changing. There’s been a movement in certain parts of Christendom for awhile now, welcoming artists and creative people back into the religious community and realizing that the safe, pleasant, Thomas Kinkade-esque visions of the world they were previously endorsing in the Christian product marketplace actually have nothing to do with Christianity. (I’m not sure how it is in other religious communities—I can only speak from my experience.)

Also, I think publishers recognize that there’s a real hunger for these kinds of stories, that faith is important to a lot of people and teens are no different. I think faith-oriented issues will be the next big wave in realistic YA fiction.

You’re someone who found early success, as your debut novel, Story of a Girl (Little, Brown, 2007), gained acclaim, a wide readership, and was eventually named a finalist for the National Book Award. Looking back, what were the blessings that came with success? The challenges? 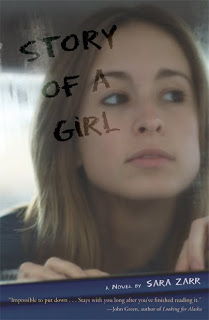 All blessings. Even the challenges. I couldn’t have asked for more things to go right as a debut author.

The primary challenge of course is the pressure of expectation. When you’re a debut author, no one really cares what you do or where you came from, and as far as the publishing world is concerned, you could go crawl back under your rock or fall off the face of the earth and things would carry on as normal.

Now, with every book, more is at stake. And I definitely feel that. That’s a blessing, too, though, because it forces me to work hard and work regularly.

If I didn’t have that pressure of expectations and deadlines, I don’t know if I would write consistently, and therefore, I’d be miserable. Because a non-writing Sara is an unhappy Sara!

What would you say to the big breakout voices of 2009?

Be proud of your hard work.

Also be grateful for all the factors you didn’t control that made you a breakout.

Know that there are also fantastic books and authors that few people have heard of and that sell pitifully. It could have been you!

Finally, don’t ruin your moment of golden opportunity by letting fear of failure keep you from forging ahead with whatever is next.

How about to those who feel they’ve somehow fallen short?

Be proud of your hard work.

Understand all the factors you didn’t control in the publication and marketing process.

With the help of your agent and writer friends, try to figure out the factors you can control next time.

Know that there are plenty of fantastic books and authors that few people have heard of and that sell pitifully!

Be grateful that you can toil away in a low-pressure environment while you craft your next masterpiece, and work on those controllable factors.

You mentioned in our last interview that you don’t do Google Alerts. This year I’ve received more phone calls from writers heartbroken or panicked about something someone said about them on the Web than ever before. Often something personal about them, not their book. Often something that exhibited a lack of understanding about the craft of writing and/or writing for young readers in particular.

In most cases, it was a “tipping” moment. It’s easy to talk about having “thick skin” when your father isn’t dying of cancer or your husband hasn’t just lost his job or you’re not a “name” author still fighting to make rent and doing without health insurance. It’s easy when you’ve never been told in that same conversation to “bare your soul.”

Could you talk to writers about why you made that decision–to step away from the noise–and why maybe at least some of them should too?

I am so sensitive. I always have been, and I know this about myself. I can be near tears if I think I’ve disappointed a stranger on the freeway who misunderstood my turn signal and thought I did something intentionally mean or stupid.

If that upsets me, you can imagine how a specific negative comment about me or my writing would feel. I’m weak, and my skin doesn’t thicken by poking at it, it only hurts more.

Can you live without the ego hit of the positive? Can you separate your identity as a writer from your popularity as a writer? Because they are not the same thing.

If you allow your writing to get tangled up in your popularity, you’re going to make your writing life a lot harder on yourself than it needs to be, and you could wear down before you’ve really done all you want to do with your writing.

Even if your popularity as at an all-time high, that’s not going to help you be a better writer.

It’s the old therapy question: What is this behavior doing for me, and is it worth it?

In the video below, Sara talks more about Once Was Lost: