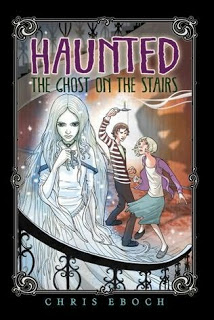 Could you tell us about the Haunted series (Aladdin, 2009-)?

The Haunted series asks a question: What would you do if a ghost needed your help? Wait–what if you didn’t even believe in ghosts?

13-year-old Jon narrates the Haunted series. He’s a skeptic, even though his mom and stepdad produce a ghost hunter TV show. In book 1, The Ghost on the Stairs (Aladdin, 2009), Jon and his younger sister, Tania, go along with the TV show on a shoot. Jon is just looking forward to cable movies and room service. But then Tania shares a secret–she has seen the ghost.

Is she going crazy? Lying to get attention? Mistaken by a trick of the light? She couldn’t have really seen a ghost–right? Jon has to decide if he believes Tania, and if so, how he can help her–or if he should.

Writing Haunted from Jon’s point of view was a special challenge, because he does not see the ghosts. The reader has to get descriptions of the ghosts through Tania’s dialogue. But this choice of narrator also gave Jon the additional problem, does he believe his sister or not? Plus, he finds out what’s going on secondhand, which is incredibly frustrating for him. And sometimes he has to protect Tania from dangers he can’t even see.

I’ve never written a book with a male first-person narrator before, but that’s how the story came into my head. I checked with a couple of male friends, to make sure I nailed the voice. I also had a male editor initially, and he said we’re going for the boy audience. The focus is on fast-paced action, spooky fun and a touch of humor.

But I hope girls will like the series as well, especially since they have Tania as a main character. She’s really the one who drives the action, dragging Jon into all kinds of trouble. They have a fun relationship, sometimes teasing and bickering, and sometimes Jon is jealous of Tania’s gift, but they’re close underneath it all.

I have a brother who’s a year and a half older, and like Jon and Tania, we got stuck together on long vacations, so maybe some of the characters’ relationship came from that.

My family lived in Saudi Arabia for six years when I was in grade school, and I got interested in world history and culture during our overseas travels. My first novel, The Well of Sacrifice (Clarion, 1999), is a Mayan historical adventure. But with market changes, I found it too hard to sell historical fiction.

The Haunted series is a nice compromise, because the ghosts allow me to explore different historical eras, while keeping the characters and action contemporary, with a popular paranormal twist.

The Ghost on the Stairs is set in a Colorado silver mining town with a ghost from the 1880s. Book 2: The Riverboat Phantom (Aladdin, 2009) features a steamboat pilot still trying to prevent a long-ago disaster. Book 3: The Knight in the Shadows (Aladdin, Oct. 2009) is set in New York City and has a Renaissance French squire trying to protect a sword on display in the Metropolitan Museum.

I can take the kids all over the country–maybe someday all over the world — to provide fresh and unique settings as they explore the world of ghosts.

In this video, Chris talks more about the Haunted series.

Check out this book trailer for the Haunted series.

“The Main Elements of Story: Plot, Character, Setting, and Theme” with author Chris Eboch sponsored by Austin SCBWI is scheduled for Oct. 10. Attendees will receive a $10 discount when registering for the local January 2010 conference–Destination Publication. Seating is limited. Note: Austin SCBWI events often sell out, and at last report, there were only five spots available for Chris’s workshop!