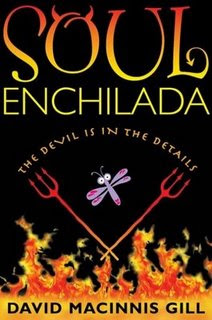 David Macinnis Gill is the author of the debut novel, Soul Enchilada (Greenwillow). His stories have appeared in several magazines, and his critical biography, Graham Salisbury: Island Boy, was published by Scarecrow Press (2005). He holds a bachelor’s degree in English/creative writing and a doctorate in education, both from the University of Tennessee.

He now lives on the Carolina coast with his family, plus fourteen fish, two rescued dogs, and a nocturnal marsupial.

Starved. I learned to read the first day of school and haven’t stopped yet. In middle school, I signed up to be a library aide so that I could have free access to the library before school, after school, during lunch, homeroom, and any class when I finished my work.

I read just about everything, especially sports books as a middle reader then science fiction and horror as a teen. At home, I read comic books, and my comics collection was huge. Sadly, I sold it before going to college.

I think we all get stuck in an age, to some extent. For me, that age was seventeen, and I still feel like I’m that old. Plus, I was a high school teacher, and I wanted to give students books to read, think, and talk about.

Like stories about lawyers and sports, stories with young adult heroes have built-in drama.

Who can resist a coming-of-age story? We are a society that appreciates a good butterfly hatching.

Stumbles, speed bumps, and traffic circles! My first fiction was published in literary magazines in the early 1990s. An agent read one of those stories and suggested I write novels instead.

I began immediately, and after only seven tries and thirteen years (I guess I’m a slow learner), I figured out how to write a novel and found a story premise that got a lot of buzz.

In June of 2007, I submitted it to my current agent, who signed me on. After two revisions, it sold to Greenwillow Books, a house that I had always admired and never dreamed would pick up Soul Enchilada.

I would have majored in something other than creative writing in college. It’s more important, I think, to have something to write about than to spend time learning to write a very specific type of fiction.

Instead, I would have gone to workshops by practicing novelists who could have shortened my learning curve.

Those seven unpublished novels. There is nothing like finishing a story, then revising it until it’s as good as it’s going to be.

It’s heartbreaking when you realize that the finished product isn’t ever going to be good enough, but it gave me the confidence that I could enter any revision, no matter how huge, and still meet the challenge. It also makes it easier recognize and throw away something that just is never going to work.

Also, my critique partners, Julie, Shannon, Jean, Lauren, and Lindsay, who are excellent readers and writers, have saved my sanity a hundred times over.

Congratulations on your debut novel, Soul Enchilada (Greenwillow, April 2009)! What was your initial inspiration for writing the story?

The novel began as a short story in 2005. One of my writers groups was having a Halloween story contest. I was given several story seeds to begin my work, and I had to include the seeds in the story. While I didn’t win, my idea was greeted enthusiastically by the group. I entered the story into the WIN short story contest, and it won.

Flash forward two years: I was struggling with the umpteenth revision of a ghost story when I decided to do something with the Halloween story. I set the other novel aside and began letting the narrator of the short story tell me more about her life. Her voice swept me up, and the first draft was down within a month. The whole timeline would be:

I should say, “getting the narrator’s voice right,” because she is so different from me. But that was the easiest part.

The challenge came from the setting, El Paso. I have never been to West Texas, so I needed a ton of information on places, names, locales, smells, sounds, and attitudes. My critique partners were invaluable, and I used the Internet for the rest.

The other difficult part was weaving all of these disparate elements of folklore, pop culture, sports, race, classism, and the American literary canon into one energetic narrative.

The amount of time and energy my publisher will spend to make sure everything is absolutely right. I’m glad that I kept notes on my research, because there were many elements that I had to justify before including them.

Also, I was surprised that my editor likes exclamation marks. I had heard that they were verboten!

Big picture, what is it like, being a debut author?

Thrilling. Terrifying. Intense. Joyous. Lonely. Overwhelming. Flattering. Rumbling. Stumbling. Fumbling. And humbling, when you learn that there are many people that you’ve never heard of who are cheering for your little book to do well.

The way I maintain balance is to run from one side of the scale to the other, hoping that it won’t tip. Balance-wise, I think I’m a lost cause. I’ve always been a hyper-attentive person who daydreams constantly, and I don’t multi-task well, so there’s a lot of putting out of fires and bouncing from one responsibility to next.

Someday, when I’m a grownup, I’ll get organized.

Did I already say that I have an amazing critique group? Well, I have an amazing critique group full of (now) published authors. We got started via Verla Kay‘s blueboard [Children’s Writers and Illustrators Message Board] and created an electronic meeting space. They are all smart readers and supportive of one another. It was their confidence in Soul Enchilada that made me realize that I had a unique idea.

Since my first sale, that has morphed somewhat, with my editor taking the lead in shaping my work. But I always want their feedback before I send work to my editor.

I support that advice, although I think starting writers should read widely in the genre of their choice and then chose a handful of accomplished writers whose work they admire. Read the books again with a critical eye, trying to recognize the structural elements that make the novel work.

And when you write, be reflective of both your process and your product. Can you write a scene more dramatically? Can you tweak your process so that you work more efficiently and create polished copy?

You wear more than one hat in the field of YA literature! Could you fill us in on your other activities in the field?

I’m the past-president of the Assembly on Literature for Adolescents, the largest professional group devoted to the study of young adult literature. I served on the ALAN Board of Directors for almost ten years.

In addition, I wrote an interview column for Teacher Librarian magazine and was a book reviewer. I’ve published books and article of literary criticism about the YA field.

How do the various “Davids” in YA literature inform one another? Do they always get along?

The author David is informed more by the scholar David than vice-versa. Publishing is a business, and working as ALAN president has given me great insight on how marketing, sales, and promotion work.

Because I was aware of how marketing-and-publicity departments choose authors and books to promote, along with where they are promoted and why, I was very informed about what happened after Soul Enchilada left my hands for the final time. I feel like I have a broader view of the field of young adult literature and how I how as a writer I fit into it.

Other than your own, so far what are your favorite YA novels of 2009 and why?

Silver Phoenix by Cindy Pon (Greenwillow, May 2009) is a beautifully-written novel set in feudal China with a female protagonist who will win you over immediately.

I read an early ARC of Wintergirls by Laurie Halse Anderson (Viking, March 2009) and still haven’t been able to shake loose of its haunting narrative.

That’s a great question. I wish I knew the answer!

Right now, I’m trying to find a knock-out idea for my second book. I’m a genre writer and reader, so it will be some fusion of science fiction, fantasy, mystery, and comedy. But it will be YA.

Several librarians have asked about a sequel for Soul Enchilada. I have ideas, but only time will tell if there will be a second helping of Enchilada. In the meantime, read Soul Enchilada again. It will be a different book the second time through.

There’s a world outside of books? Who knew? My official job is Associate Professor of English Education at the University of North Carolina Wilmington, but because I have two middle school daughters, I’m really a chauffeur. Preferably, a silent and invisible chauffeur, if my girls had their way.

Add? No, I’ve never been very good at math. Please visit me at www.davidmacinnsgill.com or www.soulenchilada.com to read my blog, get for more info about Soul Enchilada and the audiobook from Brilliance Audio, send me email, find examples of essays exploring themes in Laurie Halse Anderson‘s Twisted (Viking, 2007). You know, the usual stuff.

[Watch both of these trailers, the “Bug” version and the “Beals” version. They’re both entertaining and a sort of great study in perspective/point of view.]

An “action-packed, power-punch of a debut” –Kirkus (starred)

“Bug is a refreshingly gutsy female protagonist…that will win over readers.” –Booklist