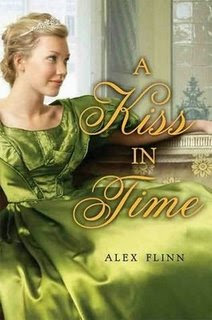 Congratulations on the release of A Kiss in Time (HarperCollins, 2009)! Could you tell us a little about the novel?

A Kiss in Time is the story of Talia, whose entire life has been devoted to the avoidance of spindles. She’s been very sheltered and longs for the time when she can travel, as other princesses do. But when she touches the spindle shown to her by an old lady, she falls into a deep sleep.

It is also the story about Jack, who lives three hundred years later. His parents send him on a tour of Europe, a tour he finds very dull. So he sneaks away from the tour group to look for the beach. But he gets lost and ends up in a strange place, hidden from the world, where everything looks old fashioned, like Colonial Williamsburg, and everyone is asleep. He sees a castle, enters it, and goes upstairs. There, he sees a very beautiful girl his own age, and he feels compelled to kiss her.

Well, that’s where the problems start. Talia wasn’t supposed to touch the spindle, so everyone is mad at her when they realize they’ve been sleeping three-hundred years. And Jack wasn’t supposed to kiss the princess, so they throw him in the dungeon for sullying her. But Talia comes down to the dungeon and tells Jack that she will free him from his imprisonment…if he takes her back to Miami with him.

I was writing another fairy tale story, one that didn’t work out, and I started thinking about Sleeping Beauty. The story neglects to tell us what happens when the princess wakes up a hundred or so years later.

I grew up loving Sleeping Beauty, particularly Tchaikovsky‘s version, but since I grew up in New York, the tales of Washington Irving also played an important part in my life.

I remember listening to Rip Van Winkle on audio in the school library on snowy days when we couldn’t go to the playground (The version I remember even had songs!). I also loved the play “Brigadoon,” which is about a town that wakes for only one day every hundred years, and Woody Allen‘s movie, “Sleeper.”

It struck me that Sleeping Beauty was really sort of the same type of story, the story of someone who oversleeps and comes back into a whole different world. I started writing this story, and I never finished the other one.

The book was a quick write for me. Once I started writing, both characters’ viewpoints came flowing out of me, which was a relief after the other book I’d struggled with.

All told, it took about eight months. Then, another year to publish. There are eighteen months between this book and my last because of the one I chucked.

The main challenge of the book was to make there be some conflict, other than whether the boy and the girl would eventually fall in love, some obstacle. I was already very familiar with the underlying story, and the book was set in my hometown. I decided the conflict would come in the form of the evil fairy, Malvolia, who is very upset that Talia has been awakened by someone whom Malvolia believes is not her true love.

I tried very hard to make Malvolia a fully-realized character. In the story, Malvolia puts the curse on Beauty because she is upset about not being invited to a party. While I had dealt with party envy because I have young daughters who’ve been heartbroken, on occasion, at not being invited to other kids’ birthday parties, I didn’t really think this was sufficient reason for Malvolia to want Talia dead. There ends up being a much greater, and more understandable, reason why Malvolia hates Talia’s father and tries to take it out on Talia.

Other, smaller challenges, came from the timing. How would people not know about the kingdom? What would happen once they awakened? And how would it end?

I was especially taken with with your depictions of girls and women in the story. Could you give us some insights as to how, considering the original fairy tale, you approached the novel in terms of gender and character(s)?

There are so many stories, through the years, about girls who are treated as property that can be moved around at their fathers’ or later, husbands’ wills.

Whether it is the Bennet girls in Austin’s novels, set in England, who must live their whole lives in hopes of making a felicitous marriage to satisfy their parents and society, or the women in Lisa See’s novels, set in China, who undergo painful foot binding (including the breaking of their toes) so that they can marry well, women seldom have free will.

This is particularly apparent in fairy tales. My previous fairy tale novel was inspired by the idea of Beauty (in Beauty and the Beast) sacrificing herself to save her father.

This one was inspired by the idea of Sleeping Beauty being kept a virtual prisoner to keep her away from spindles, which were both common household objects and a fairly obvious symbol of male virility.

When she finally reaches her sixteenth birthday, she is supposed to marry, which symbolizes freedom, but since she hasn’t met her husband, it will really be a new form of imprisonment.

My thought was that women haven’t changed that much, inside, in the past several hundred years, though society’s treatment of them has in some cases. So a girl like Sleeping Beauty might be told that she can’t go out, can’t touch a spindle, or what all, but that doesn’t mean she wouldn’t scheme against it. In my story, the very first time Talia gets a bit of freedom, she pricks her finger on a spindle. But, because she wakes in 2009, the world treats her very differently.

I’ve thought about this a lot. This book is sort of a departure for me.

My first five books were realistic fiction, and then I wrote a book, Beastly (HarperCollins, 2007), which is a modern Beauty and the Beast retelling, set in New York City. But that book would still appeal to largely the same audience as my earlier books because it was a male narrator and sort of a violent, suspenseful book.

I wanted to write another fairy tale book, for kids who enjoyed Beastly. I think it’s important that, if readers like a book, that something else by me may appeal.

But A Kiss in Time is a gentler book, and it’s funnier than anything else I’ve written. I’m working on another fairy tale book right now, but I’ll probably go back to realistic books in the future, because I enjoy the impact they have on readers too. I feel a sense of loyalty to the readers of my realistic books because my books have been important to them.

I’m fortunate to be able to attend a lot of teacher and librarian conferences. These lead to school visit invitations which allow me to meet my readers directly.

I work alone, but I have some friends, including authors Debbie Reed Fischer, Marjetta Geerling, and Joyce Sweeney, who read my books before I send them in to my editor.

The critique-group format doesn’t seem to work for me. My books tend to work on a micro level–like, each chapter will be good–but need help on a macro level, like whether the plot is too complicated. So reading each chapter aloud doesn’t get me much help. I need someone to read my whole book.

Also, I just don’t like sharing my work until it is perfect in my mind. I wrote my whole first book with very little help from anyone until it was almost done, mostly because I didn’t know any writers.

Then, I got a critique group for my next four books, which was mostly social for me (I still get together socially with a group of writers three-to-four times a year). The critique group was an hour away, so when gas prices soared, I stopped attending and wrote Beastly and Kiss without the group. That’s when I realized I was better off on my own. I have the utmost faith in my editor, Antonia Markiet, so that helps a lot.

Well, it’s only February [note: Cynsations works ahead], so I haven’t read a whole lot of 2009 novels yet. However, I really enjoyed a first novel, Shrinking Violet by Danielle Joseph (MTV, May 2009), which is about a girl who is extremely shy, but who comes alive as a radio host.

I was sort of invisible when I was in high school (This was brought home to me recently, when I visited my high school to be honored for my accomplishments and realized that the teachers and administration remembered all the other honorees–which included Jeff Bezos of Amazon–but not me), so I related to the character who was a different person in her heart and mind.