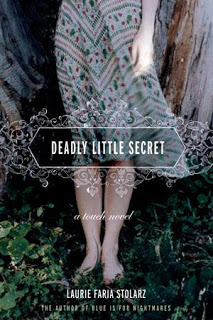 You last visited Cynsations in December 2007 to discuss the release of Project 17 (Hyperion, 2007). Do you have any more recent news to share on that novel or your other books?

Project 17 will be coming out in paperback in June. For its release, I’ll be launching a very exciting contest (more details will be available this spring). Also, I was very happy to hear that Project 17 made the ALA Quick Pick List for 2009.

Congratulations on the success of Deadly Little Secret (Hyperion, 2008)! Could you tell us about the novel?

Up until three months ago, everything about sixteen-year-old Camelia’s life had been fairly ordinary: decent grades; an okay relationship with her parents; and a pretty cool part-time job at an art studio downtown.

But when Ben, the mysterious new guy, starts junior year at her high school, her life becomes far from ordinary.

Rumored to be somehow responsible for his ex-girlfriend’s accidental death, Ben is immediately ostracized by everyone on campus. Except for Camelia. She’s reluctant to believe he’s trouble, even when her friends try to convince her otherwise. Instead she’s inexplicably drawn to him, and to his touch.

But soon, Camelia is receiving eerie phone calls and strange packages with threatening notes. Ben insists she’ in danger, and that he can help, but she’s not so sure she can trust him. She knows he’s hiding something, and he’s not the only one with a secret.

What was the inspiration for writing it?

In Bleed, in particular, there’s a young male character who was convicted for the murder of his girlfriend. His next relationship consists of pen pal letters he exchanges with a young girl while he’s in prison. Without giving too much away, the relationship is briefly pursued once he is released, but I wanted to bring this concept to another level.

Additionally, I wanted to continue experimenting with the supernatural (which I also use in my Blue is for Nightmares Series as well as in Project 17), showing how we all have our own inner senses and intuition and how, with work, we can tap into those senses and make them stronger.

I started researching different types of supernatural powers and discovered the power of psychometry (the ability to sense things through touch). The concept fascinated me, and so I wanted to bring it out in a character, showing how sometimes even the most extraordinary powers can also be a curse.

Lastly, I wanted this book to be part of another series because I love the idea of growing a main character over the course of several books. Deadly Little Lies, the second book in the Touch Series, will be released this fall.

I sold the book based on a detailed synopsis. It came out about a year and a half later. I keep a strict ten-pages-per-week deadline for myself while I’m working on a project. This keeps me right on target, time-wise.

I definitely do like to take things book-by-book. I’d like to be able to continue this career for many years to come. I’m having fun with it, I have a generous and devoted fan base, and I’m learning a lot. I’m very lucky and very grateful. For now, that works for me.

I’m really enjoying Facebook right now. It’s very user-friendly, which is definitely a big plus for me. I like being able to update it so easily, and I’ve been able to connect with a lot of my readers by using it. I also send out an e-newsletter every couple of months, informing readers about signings, events, new books, and contests.

Do you have a mentor (or did you earlier on)?

Yes, my English professor during my undergraduate time at Merrimack College, Dr. MaryKay Mahoney. I was a business major in college with huge dreams of becoming a writer. It just never occurred to me that I could actually pursue that dream.

I came from a very practical family with not a lot of money, and the idea of becoming a writer was about the equivalent of going to Hollywood and becoming the next Julia Roberts. It just wasn’t within the realm of possibility for me.

But MaryKay told me that I owed it to myself to pursue my writing, that I was very talented, and that she knew if I tried I could do it. No one had ever said anything like that to me before. Not so coincidentally, I dedicated Deadly Little Secret to her and to my mother.

For years, I worked in a writers group that I really loved, but then people started doing other things and taking breaks, and so I went back to working on my own.

For Deadly Little Lies, I swapped first draft pages with Stacy DeKeyser, author of Jump the Tracks (Flux, 2008). I really like getting feedback on my work. I think it’s important to get that perspective. I get so close to my work and I like having someone there to ask just the right questions along the way.

How has publishing changed since you first entered the field?

It feels as though the young adult market has quadrupled since I first started. It’s exciting. There are so many more options for teens to read than when I was a young adult, which makes more opportunities for writers.

I think she managed pretty well on her own, though I would tell her to have a bit more confidence. Looking back there are indeed some things I would have changed, but I’ve learned a lot since then, and I think I’m better for the process.

Listen to Laurie read from the first chapter of Deadly Little Secret.