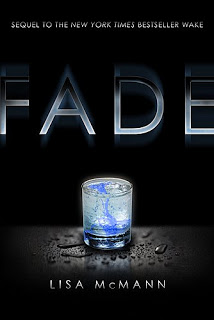 Lisa McMann on Lisa McMann: Lisa McMann is the author of New York Times bestseller Wake (Simon Pulse, 2008). Its sequel, Fade, is now available, and a third book in the series, Gone, is slated for spring 2010. Wake is a YALSA BBYA nominee, a Quick Pick for Reluctant Young Adults, and a Borders Original Voices Finalist.

Lisa grew up in Michigan. When she was a teenager, she worked as a blueberry picker, babysitter, bookstore clerk, and bindery worker in a printing company where she used a machine to roll gazillions of labels and stickers onto cardboard cores. She still has the paper cut scars to prove it. Now, Lisa and her family live near Phoenix where she writes from a green chair overlooking the Superstition Mountains.

Sometimes she wears a cowboy hat.

She’s not really a cowboy.

I went to the library with my mom every Saturday and brought home fourteen books. I read whenever I could. I loved A Tree Grows in Brooklyn [by Betty Smith (1943)], Little Women [by Louisa May Alcott (1868, 1869) , all the Cherry Ames nurse books [by Helen Wells], Little House series, Judy Blume (I had to hide those books from my mom, though), Roald Dahl.

My first manuscript (which is not published) was inspired by a documentary called “Into the Arms of Strangers: Stories of the Kinder Transport.” I was so moved by the stories of the hard lives the children in the documentary faced as Jewish children escaping from Germany to England right before the Holocaust. It was such a reminder of how strong teens are.

It has always felt natural to me to write about young adults. They are so incredibly interesting and tragic and wonderful. Their lives change enormously over just a few years –there is so much to write about when it comes to teens.

Well, as I mentioned, Wake wasn’t my first manuscript, nor was it my second (which will never see the light of day). It’s my third, but the first to get published. It felt like a stumble at the time when manuscript #1 got so close to hooking an agent but ultimately failed to do so, but looking back, I see now that it is so important to practice writing novels.

There were sprints, as well. When I started to look for an agent with Wake, I sent my query out to twelve agents one Monday, starting with the one agent I wanted more than anyone. Within two hours, I had a request from my dream agent for the full manuscript. Two days later, I had six other requests for the full. By Friday of that week, Michael Bourret of Dystel & Goderich, the agent I was so hoping for, offered representation. So that went very quickly.

This is not to say I didn’t accept feedback and critiques — I welcomed those as all writers must do to get better.

I’m terrified of giving away spoilers, so here is the flap copy for Fade:

For Janie and Cabel, real life is getting tougher than the dreams.

They’re just trying to carve out a little (secret) time together, but no such luck. Disturbing things are happening at Fieldridge High, yet nobody’s talking. When Janie taps into a classmate’s violent nightmares, the case finally breaks open–but nothing goes as planned. Not even close. Janie’s in way over her head, and Cabe’s shocking behavior has grave consequences for them both.

Worse yet, Janie learns the truth about herself and her ability. And it’s bleak. Seriously, brutally bleak. Not only is her fate as a Dream Catcher sealed, but what’s to come is way darker than she’d even feared…

Did you always intend to continue Janie’s story behind the first book? If not, how did that evolve?

When I finished Wake, I immediately did what all writers should not do (there I go, breaking the rules again): I started writing a sequel, Fade. I couldn’t help it — it burst out of me, and I decided that I had to write it even if it never got published. So I was not counting on Fade ever seeing the light of day. But my wonderful editor Jen at Pulse wanted a sequel. By the time we sold the two books, I actually had Fade finished. So that was a relief, and it worked out all right.

What were the challenges (literary, research, psychological, and logistical) in bringing Fade to life?

Researching police procedure turned out to be difficult, so occasionally I resorted to doing something authors call “making stuff up.” I also had to do a lot of research on illegal drugs and how to create them, which made me feel really creepy.

When I write, I focus on writing, and when I’m doing promo, I focus on promo. I like to keep jobs in their boxes.

For instance, from the time Wake came out in March 2008 until August 2008, I didn’t write anything. I focused on selling Wake (and hanging around with my kids for the summer).

I had sold book three during that time so I had that plot on my mind, which was good (I like to think about a book for a while before I write anything), but I didn’t write any of it.

Once August hit, though, my goal was to write Gone (book three), and I spent my time very focused on that.

You’re particularly adept at Internet marketing. What advice do you have for fellow authors in this regard?

For teen authors who are comfortable with it, it’s important to have an online presence, or a home in the neighborhood where your readers live. Facebook, Twitter, MySpace, Goodreads, Shelfari, a blog and website…whatever works for you.

Interaction is great and it’s a good use of your time, especially when you have a book that’s about to come out.

A. S. King did a great job of this as she prepared for her book, The Dust of 100 Dogs (Flux, Feb. 2009), to come out. There’s nothing like having a fan base before your book even hits the shelves. That gives you a boost when the book actually hits bookstores.

So far, as a reader, what were your favorite YA books of 2008 and why?

I loved Sweethearts by Sara Zarr (Little Brown) because Sara’s characters are so real.

The Remarkable & Very True Story of Lucy & Snowcap by H. M. Bouwman (Marshall Cavendish)(which is for ages 10+) because it’s a fresh and surprising fantasy.

The Violet series by Melissa Walker (Berkeley Trade) because who doesn’t want to live vicariously through a geeky model?

Little Brother by Cory Doctorow (Tor) because it’s so smart and because I love San Francisco.

I like hanging out with my hubby and kids, watching reality TV, swimming and walking (great places to work out a plot), and traveling.

Wake book three (the third and final) is next, called Gone. It’s due out spring 2010. Beyond that, I have a couple of options that I’d love to see happen but nothing I can discuss yet. I will be sure to announce any news on my Facebook and website, though.

If you aren’t already my friend, please do look me up online at one or more of my usual haunts — MySpace, Facebook, Twitter, Goodreads, Redroom, etc.

Devyn has a nice chat with Lisa: