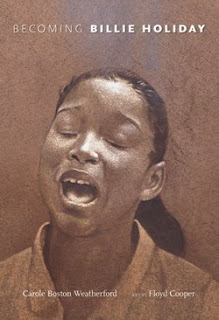 Carole Boston Weatherford: “Baltimore-born and -raised, I composed my first poem in first grade and dictated the verse to my mother. My father, a high school printing teacher, printed some of my early poems on index cards. I earned a Master of Arts in publications design from the University of Baltimore and a Master of Fine Arts from the University of North Carolina-Greensboro. I teach at Fayetteville State University and live in High Point, N.C. with my husband Ronald and our college-age son and daughter.” Source: Carole’s website.

Why did you decide to make books for young readers the focus of your creative life?

I began as a poet and had published in literary journals before becoming a mother. Motherhood reintroduced me to children’s books. I noted the multicultural trend and decided to try my hand at poeting for young readers.

Could you describe your path to publication–any sprints or stumbles along the way?

I got out of the slush pile by name-dropping in cover letters. I knew somebody who knew somebody. I landed my first two contracts that way.

Would you please briefly update us on your back list titles, highlighting as you see fit?

I have 32 books to my credit, mostly for young people. My career has been helped by a string of awards. 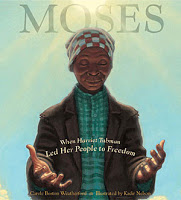 Moses: When Harriet Tubman Led her People to Freedom (Jump at the Sun/Hyperion, 2006), illustrated by Kadir Nelson, won a Caldecott Honor, the Coretta Scott King Award for Illustration and an NAACP Image Award.

The Sound that Jazz Makes, illustrated by Eric Velasquez (Walker, 2000) won the Carter G. Woodson Award from National Council for the Social Studies (NCSS) and an NAACP Image Award nomination.

Freedom on the Menu: The Greensboro Sit-Ins (Dial, 2005), illustrated by Jerome Lagarrigue, and Remember the Bridge: Poems of a People (Philomel, 2002) both won the North Carolina Juvenile Literature Award. 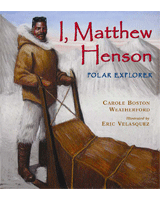 Congratulations on the release of Becoming Billie Holiday, illustrated by Floyd Cooper (Boyds Mills/Wordsong, 2008)! Could you tell us a little about the book?

Nintey-seven poems, titled after Billie’s songs and written in her voice, trace the singer’s journey from B-girl to jazz royalty. The poems are punctuated by stunning mixed media illustrations by Floyd Cooper.

Here’s the premise: Billie is stewing over a condescending Time magazine review of her signature song, the anti-lynching protest hymn “Strange Fruit.” Twenty-four-year-old Billie recites her own memoir.

Born Eleanora Fagan, she was neglected by her parents, raped by a neighbor, and sent to reform school. She scrubbed marble steps, drank bootleg liquor, smoked then-legal weed, worked in a brothel, and found her voice–all before leaving Baltimore. She hit New York just as the Harlem Renaissance was fading into the Great Depression.

Luckily, Eleanora had a voice. She began her singing career as a teen and, by age 25, had shared the spotlight with the era’s hottest bands and recorded her signature song “Strange Fruit.”

What was your inspiration for telling Billie’s story?

Billie has been my muse for decades. Like her, I grew up in Baltimore. I heard her music at an early age because my father was a jazz fan and owned a few of her records.

When I was 16 years old, he took me to see the film “Lady Sings the Blues.” I’ve been hooked on Billie Holiday ever since.

After conceiving the idea, I almost didn’t write the book. I feared that young adults might not relate to a long-gone jazz legend. Then, an eighth grader admiring the singer’s likeness at Baltimore’s Great Blacks in Wax Museum unknowingly green-lighted the project.

When I saw that the teenager was not only familiar with Billie Holiday but loved her singing, I decided to go forward.

Before writing a word, I listened to her early recordings, and read bios and interviews. I realized that Lady was not just singing the blues; she was singing her life.

As I researched, Billie whispered in my ear, and as I wrote, she hummed in the background. It was almost as if I were merely transcribing her story. The poems poured out of me at the unprecedented pace of two to three a day. Within three months, I has completed the manuscript.

Perhaps because Billie is my muse, there were few challenges on this project. In fact, it seemed as if a way opened for me and for my subject.

I had told my editor about the project before submitting it, and he got back to me in 24 hours with an offer. I feel as if I was destined to write this memoir.

What did Floyd Cooper’s art bring to your text?

Floyd Cooper’s cinematic art evokes the same nostalgia that Billie’s music does. How fitting that he chose a sepia-toned palette.

How about for those writing poetry for young readers?

I would tell any writer with a goal of publication to practice the craft, revise religiously, join a critique group, study the market, learn how to pitch, and by all means persist.

Keep the faith. The road will be long, but the journey will be worth it.

I just received Loren Long‘s writing debut, Drummer Boy (Philomel, 2008). It’s a charming story, wonderfully written and illustrated. As far as YA, I view Race: A History of Black and White by Marc Aronson (Ginee Seo, 2007) as an important book. 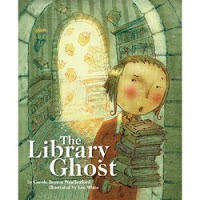 I have a new picture book, The Library Ghost, illustrated by Lee White (Upstart, 2008). It’s my first fantasy. After writing the book I was surprised to find out how many libraries really are haunted. I’ve even visited a few–but not after hours. There’s a list on George Eberhart’s Brittanica Blog, and a 24-hour webcams at www.libraryghost.com.