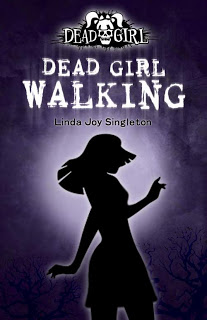 We last spoke in April 2007 about The Seer series (Llewellyn, 2004-). Could you update us on news of your writing life since that time?

Well, at that time I was getting a little nervous about what would sell next since I’d finished the fifth The Seer. I happened to mention my Dead Girl Walking book in an email to my editor, and he suggested I turn it into a series.

So a three-book Dead Girl series (Llewellyn/Flux, 2008-) was contracted in summer 2007. Since then I’ve been writing the books. As I’m typing today, in another window are revisions for number two, Dead Girl Dancing, and when these are done, I’ll return to writing the third book, Dead Girl in Love.

I’ve been very lucky to find such a supportive publisher as Flux.

Congratulations on the publication of Dead Girl Walking (Flux, Sept. 2008)! Could you fill us in on the story?

In 1988, I came up with the idea of a girl having an out-of-body experience then returning to the wrong body. I subbed this around for a few years, then put it aside.

I brought it back a few times only nothing clicked until last summer when my previous editor at Flux, Andrew Karre [now at Carolrhoda], pointed out my heroine was too whiny and, if I’d rewrite her plus add more paranormal danger to the plot, he’d offer a three-book contract. I am forever grateful for his insight and delighted with the finished book.

I was curious what it would be like to live someone else’s life. Also I’ve always had a fascination with otherworldly topics like astral projection, psychics, and near-death experiences.

When I came up with idea 20 years ago, I loved it but didn’t realize it would take some years to hone my craft to do justice to the idea.

If you want to see an example of early writing compared to more seasoned writing, I posted the original first page in comparison to the published first page over at my LJ.

The first plan was for Dead Girl to be a middle-grade book with a light tone about a girl who falls to her near-death while trying to rescue a cat from a tall pole. Her real body would have died, and she would have had to deal with making a completely new life. When I ultimately sold it as a series, the ending drastically changed.

Rewrite more before submitting (I was always so impatient and subbed too soon). Also to learn more about craft. And to write the books I truly want to write rather than leaning toward those I thought would be easier to sell. But I really can’t regret any of the packaged or ghost-written books I wrote as they were all learning experiences and I truly loved every book.

What special advice would you offer to those interested in writing a series?

Write one really strong first book that could stand alone. Dead Girl Walking was meant to be a single title, but I was flexible with my editor’s suggestions and happy to stretch Amber’s body-changing adventures into a trilogy.

Other than your own, what your three favorite YA titles of 2008?

Good question! I love to read juvenile books and get excited when I discover exciting new titles.

Impossible by Nancy Werlin (Dial) was amazing, too. So was Lament: The Faerie Queen’s Deception by Maggie Stiefvater (Flux)(author interview). Obviously there were other amazing books in 2008, these are just the ones I’ve found time and copies to read.