The Ghosts of Kerfol by Deborah Noyes (Candlewick, 2008). From the promotional copy: 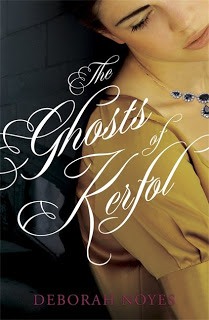 The elderly lord was found dead on the stairs, apparently savaged by a pack of dogs, though there were no dogs–no live dogs- at Kerfol that day.

In this remarkable collection of intertwining short stories, Deborah Noyes takes us back to the haunted manor and tells us Anne de Barrigan’s story through the sympathetic eyes of her servant girl.

Four more tales slip forward in time, peering in on a young artist, a hard-drinking party girl, a young American couple, and a deaf gardener who now tends the Kerfol estate. All these souls are haunted by the ghosts of Kerfol–the dead dogs, the sensual yet uneasy relationships, and the bitter taste of revenge.

In an enthralling work of Gothic suspense, an Edith Wharton story inspires five connected tales set in the same haunted manor over the centuries.

We last spoke in November 2007. Congratulations on the release of The Ghosts of Kerfol (Candlewick, 2008)! Could you share with us the story behind the story?

I originally set out to retell a handful of classic American Gothic tales for a Candlewick collection, and Edith Wharton‘s “Kerfol” [(1916)]–one of my all-time favorite ghost stories–was one of them. But that project stalled out.

I’d already learned while writing my adult historical novel (a re-imagining of The Scarlet Letter (1850) from the point of view of a character not Hester Prynne), that the soul of a story by Hawthorne is the voice of Hawthorne.

Same turns out to be true, of course, for Poe and Henry James and Edith Wharton. And if you aren’t going to do something new with material like that, there’s no point messing with a good thing.

I talked it over with my editor, and instead we set out to really inhabit the story we both liked best of the bunch, and the haunted house of its title.

I love stories where a house or a locale or an object are a main character in the story, so I started there.

In the movie “The Red Violin,” a single haunted object gets passed from hand to hand and wreaks havoc through history, a different psychological or emotional havoc for each recipient, depending on what they bring to the mix, and I used that framework here. So “The Red Violin” was my biggest influence after Wharton.

Last but not least–her dogs! The better part of Wharton’s haunting is carried out by nonhuman spirits. For an animal person like me, this rings resoundingly true. I know her story stuck with me as long and as powerfully as it did because of those spectacular ghostly dogs. Silent and unnerving, they don’t appear bearing fateful messages from the beyond. Instead they mirror whoever encounters them, reflecting what’s good or bad or timid or courageous in them. Just as (I believe) animals do in everyday life.

Enter to win one of three autographed copies of The Ghosts of Kerfol by Deborah Noyes (Candlewick, 2008)!

To enter, email me (scroll and click on the envelope) with your name and snail/street mail address by 10 p.m. CST Oct. 21!

One copy will go to a teacher, librarian, or university professor of youth literature (please indicate), and the other two will go to any Cynsational readers. Please also type “Kerfol” in the subject line. Read a previous Cynsations interview with Deborah.