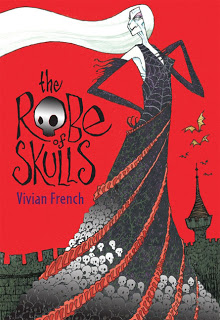 My most recent books: a new series of The Tiara Club, and a picture book for older children called Singing to the Sun. It’s illustrated by Jackie Morris–I think she’s wonderful, and I’m so pleased to have had the opportunity to work with her at last. (We’ve known each other for a long time.) She’s got a truly wonderful website–Google her, and enjoy!

Oh, and last year there was Chocolate: The Bean that Conquered the World. (Illustrated by Paul Howard. He’s amazing–I’m such a fan of his.)

Congratulations on the publication of The Robe of Skulls (Candlewick, 2008)(excerpt)! Could you fill us in on the story?

Thank you so much. The Robe of Skulls is a story about Lady Lamorna, a sorceress living in the high mountain village of Fracture. Lady Lamorna wants a new black velvet dress (decorated with skulls, hence the title) and sends an order to the Ancient Crones…only to find she has no
money left in her treasure chest. Together with her servant, Gubble, (a troll with an unreliable head–if slapped, his head falls off) she makes a plan to blackmail the local royalty.

Luckily, Gracie Gillypot and Prince Marcus are able to thwart her plans with the help of a bat called Marlon (a great admirer of M Brando)–and no help at all from Gracie’s wicked step-sister, Foyce Undershaft.

It was more desperation than inspiration.

I’d had an idea that had gone terribly wrong, and wasn’t sure what to do–and then I heard someone on the TV talking about evil. The actor had a very distinctive voice; I remembered seeing her in a play years and years and years ago, and I also remembered she had worn a long black velvet dress. I put the two things together, and Lady Lamorna appeared.

I’m not sure quite how long the timeline was–about eighteen months, perhaps? The first draft only took me about three months; I enjoyed writing Robe enormously–I had fun.

Looking back on it it feels as if it went very smoothly, although I’m sure I had more than a few wobbly moments along the way. I do remember my wonderful editor suggesting I write an extra chapter at the end, which I did–and she was quite right. It really needed it.

I certainly didn’t do any research. When I was little I loved fairy stories and folk tales, and I was a storyteller for many years using those very same stories, so I think a lot of the characters come from the same background.

When it comes to a story like The Robe of Skulls I just sit down and get on with it… I can always hear the characters talking and see the actions unfolding in my head as I write.

I make a lot of notes about the plot before I begin, but then I usually lose the notes–but I don’t miss them. If something doesn’t seem to be working out I delete that section, then begin again and again until it feels right.

A lot of it is instinct; I read sections out loud, and I can tell (I hope!) if something isn’t working.

I became a writer very suddenly. It wasn’t something I’d always wanted to do; I wanted to be an actor or a long distance lorry driver when I was growing up.

I think I’d tell myself, Always make sure it’s as good as it possibly can be. Actually, I think I’ve always told myself that–I am so incredibly lucky to be able to do what I do.

Not very well. Sometimes it gets to be a bit of a muddle, but I’m taking time out next year so I can spend more time writing and less time rushing around.

I do think it’s important to talk to children, and tell them that they can be writers. Nobody ever said that to me when I was at school, so I was extremely surprised when I had my first books published. (So was my mother.)

I have a lovely husband, four daughters and three grandchildren, so I spend time with them. I read a lot, and I adore going to hear live music (anybody else out there love Mary Gautier? Or The Willard Grant Conspiracy?)

Also I have a number of really good friends, and I probably spend much too much time drinking coffee and talking…

The Bag of Bones is another story from Tales From the Five Kingdoms; Gracie and Marcus have to cope with a hideous witch called Truda Hangnail. And I’m currently working on the next story–The Heart of Glass.