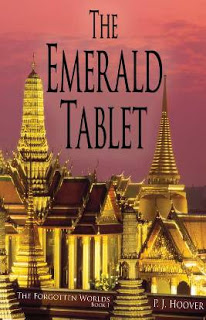 P. J. Hoover on P. J. Hoover: “Basically, I grew up a cool nerd. I loved math, computers, and ‘Star Trek’ but also happened to be captain of the cheerleading squad.

“I opted out of AP English to take Astronomy instead. After all, at the time, I thought drawing planetary orbits was way more fun that reading As I Lay Dying [by William Faulkner (1930)].

“But I always had a love for the unknown (Astronomy being a good example). So, even though I headed off to college for electrical engineering, I had a mid-college crisis and almost became an archaeologist.

“After all, what could be more fun than sitting in a baking desert brushing of bits of pottery? But engineering was hard to throw away, so I settled for a second degree in History.”

P. J. makes her home in the Austin area. Read her blog, Roots in Myth.

It was only after the birth of my second child that I decided to start writing. She happened to be this fabulous sleeper (sleeping through the night by four-weeks old—I know, please don’t hate me), we’d sworn off TV, and so, all of a sudden, I had tons of extra time on my hands.

Okay, really, when I say “tons,” I mean a couple hours in the evening I’d never had before.

I always loved reading and decided to start creating my own contribution to the writing world. And I realized by writing a couple hours a night, every night, I could write novels.

Could you tell us about your path to publication? Any sprints or stumbles along
the way?

I started working on The Emerald Tablet (The Forgotten Worlds: Book One)(Blooming Tree, 2008) late in 2004, knowing almost nothing about the writing and publishing world.

After an initial draft and tons of revisions, I joined SCBWI and started sending the manuscript off. But talk about needing plenty of work! My draft at the time was around 120K words and full of back-story.

I headed to the National SCBWI conference that winter in New York and happened to meet an editor who said she’d be happy to read it and give me some feedback. (Yes, traveling to conferences is totally worth the money and effort).

When she told me I needed to cut at least a third of it, I thought she was nuts, but, once she explained and I started learning more about writing, I found her feedback eye opening, and I dove into revisions.

How did your first sale come about? 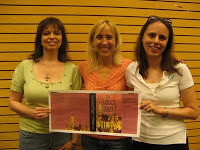 Once I finished initial revisions, I sent the manuscript back to the same editor, Madeline Smoot from Blooming Tree Press. She kindly read it again and gave me more feedback.

This went on a few more times until one day she said something along the lines of, “After one more revision, this will be ready for acquisition.”

Up until this point, I’d tried not to let myself get too excited about the prospect of signing on with her, but, once she said this, I realized she actually meant to buy it! I signed a three-book contract with Blooming Tree Press in early 2007 for Fall 2008, 2009, and 2010 releases.

How did you react to the news?

I blogged it! I emailed all my relatives. I treated myself to a massage.

There’s just something really amazing about having someone else you’re not related to believe in your writing and want to see it succeed as much as you do.

Congratulations on the publication of The Emerald Tablet (The Forgotten Worlds: Book One)(Blooming Tree, 2008)! Could you fill us in on the story?

The Emerald Tablet tells the story of a boy, Benjamin Holt, who, upon turning thirteen, finds out not only is he not human, he’s from a whole different world. The world, Lemuria, is hidden beneath the Pacific Ocean, and within minutes, he’s being whisked off to spend his summer there, learning to control his telepathy and telekinesis talents. Except in this new world, they aren’t even talents anymore. Everyone has them, and he’s just normal.

His best friend happens to be along also, and, within hours of being on the new world, the two of them and three other kids sneak off and find something hidden in the basement of the ruling hall. But it turns out this ancient relic (The Emerald Tablet) has been waiting for Benjamin for ages.
As soon as Benjamin touches the tablet, it binds them together (telepathically) and gives them the task of saving the world.

And he thought summer was going to be all fun and games.

Television sci-fi and fantasy. I’m happy a childhood of TV watching was not wasted.

There used to be this high quality TV show back in the early 80’s called “The Powers of Matthew Star.” Matthew Star was basically this ordinary kid who had special powers like telepathy and telekinesis. He could pop popcorn with his mind so fast, other kids thought he was magic—which I guess he kind of was. He was good looking and cool and oh-so 80’s.

The show was on air for about six months, but I loved it, and it always stuck with me. How cool would it be to have powers like that and to have to pretend to be a normal kid? And so Benjamin Holt and telegens were born.

As for the lost continents, I’ve always loved ancient civilizations, and I’ve wanted Atlantis to be real. So I knew Atlantis would have to be in the storyline. But while researching, I came across the sister continent of Lemuria and knew immediately my main story would be set there.

I began The Emerald Tablet in December 2004, and the publication date is October 2008. So about four years from conception to publication.

The most major event along the way was meeting my editor at the national SCBWI conference in New York. Not only did she help my writing immensely, she gave me confidence and ended up signing me.

After the first draft and initial revisions, I read tons of books on writing craft. I started reading other novels like a writer, seeing how other authors expressed emotions and showed descriptions. And as I kept writing and revising, I incorporated things I learned along the way.

It’s a great year to be a debut author! I am fortunate enough to have been accepted into the Class of 2k8, a fabulous group of 27 other debut authors with books coming out in 2008.

Aside from the group marketing premise of the Class, I’ve made friends and connections with authors I may never had met otherwise.

Plus, it’s fun being a debut author, no matter what the year!

Take as much time between revisions as you can stand. Seriously. A month. Four months. A year. This is so hard to do, so it helps to have other stuff you’re working on (like the second and third books of a trilogy). But the longer you can wait between revisions, the more clear problems with the manuscript will be to you.

What advice do you have for those writing fantasy?

Look for something unique you can contribute to the fantasy or sci-fi world.

Toss aside the first idea which comes into your head and go with the second. Or the third.

Try to incorporate something cool on each page. Cool things can make all the difference in a reader’s mind.

How about for those interested in marketing a multi-book project?

I’m all for writing that first book and submitting it. But while it’s being submitted, work on the second. And the third. Then you may find when you come back to the first, you can seed it with lots of great details that will come up later in the series.

As for mentioning multi-book projects in queries, conventional wisdom says not to do this. Once you get some interest, maybe then it’s time to bring up your ideas for the next ten books in the series. But when you’re selling the first, keep that in mind. It’s only the first which will be on the shelves, and this will need to hook readers.

Other than your own, what your three favorite fantasies of 2008 and why?

I’m a huge Rick Riordan fan, so I’d be remiss if I didn’t put The Battle of the Labyrinth (Percy Jackson & The Olympians: Book 4)(Hyperion, 2008)(author interview) at the top on my list.

I thought The Adoration of Jenna Fox by Mary E. Pearson (Henry Holt, 2008)(author interview) was an awesome example of sci-fi set in our near future.

And finally, I loved The Hunger Games by Suzanne Collins (Scholastic Press, 2008). The character and story were original and engaging.

How do you balance your life as a writer with the new responsibilities (speaking, promotion, etc.) of being an author?

I keep a list of all the smaller things which need to get done on an ongoing basis. Interviews, contacting reviewers, signings.

In addition, for promotion, I have a separate calendar for just this. On it, I record when I need to get requested information back, when I need to respond to emails, and I can also see where I have more free time to fill with other promotional opportunities.

For writing, my evenings are still dedicated to this. During the day when my kids are at school, I dedicate days to solely writing or solely promotion. This way I can focus more on one task at a time. But it is a balance. Luckily, thus far, I enjoy all aspects of the writer’s life.

Up until April 2008 I also worked full time as an electrical engineer, designing chips for cell phones and Kindles. I decided to give the full time writing thing a try, and so far love the decision. I’m lucky enough to have a totally supportive husband.

I have two children, a daughter (age 4) and a son (age 7). They give me unlimited ideas for writing and also provide that much needed glimpse into how kids really think.

I have a Yorkshire Terrier and also two tortoises (King Tort and Nefertorti) who are supposed to live to 180 years-old. Yikes! So it looks like I’ll be raising tortoises forever.

I love to read, knit, and build things around the house.

Last year was a haunted playhouse for the kids. This year, our big project is a clubhouse in the backyard.

I have a middle grade Egyptian series I’m working on along with a YA mythology fantasy.

And not to forget, the second Forgotten Worlds book, The Navel of the World, will be coming out Fall 2009.