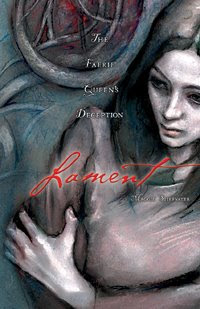 Maggie Stiefvater on Maggie Stiefvater: “I’m a 26-year old with a serious Peter Pan complex, an addiction to sweet tea and cookie dough, and an obsessive love of music. When I’m not hanging out with my tolerant husband and two toddlers, I’m either writing, reading, rocking out on some sort of musical instrument, creating art or generally frolicking. I’m all about the frolicking.”

The aforementioned Peter Pan complex means that I really relate to teen lit–teens still believe in their dreams and still have a furious passion for life, which I respect and hope I never lose.

I taught a lot of art workshops to adults before I went full time with my writing, and adults say “I’m too old to do this” all the time. Or “If things were different, I’d try to… [fill in the blank].”

Teens still risk everything. That makes for awesome fiction, compelling characters, and lots of angst. You just can’t get quality angst in adult fiction.

I wrote the manuscript as “The Queen’s Bidding” when I was in college. I tinkered with it for a while and then sent it to publishers–for some reason I’d decided that agents were cheating and I wanted to do it all on my own. Yes, that’s the sort of college girl I was.

Anyway, I got some nice rejection letters and a really nice revision request from Andrew Karre at Flux.

It seemed that in the first version, my main character was too middle grade, and she also was entirely without a spine. Also, there was not nearly enough angst and nookie, though I didn’t realize this at the time.

Anyway, at this news, I clapped my hands and danced around and revised the manuscript. But I didn’t push the revisions far enough and Flux didn’t buy it.

For some reason, I don’t remember being suitably crushed by this news. I was revoltingly hopeful at this stage that I was getting close.

There was good news, anyway: Andrew had gotten me on the path of reading current popular fiction (see my vehement exhortations below) and a whole new world was opened to me. Of course! TQB was lame! I could do better! I wrote another novel which I decided kicked TQB’s butt and sent it out.

Andrew sent me an email that said in a friendly editorial way (essentially the only way he ever says anything), “Let’s talk.” I clapped my hands and danced, thinking this was going to be The Call…and then listened to him say that he still wasn’t ready to give up on TQB.

I still to this day don’t know if he ever completely read the novel I wrote after TQB. But it didn’t matter, because this time when he waved TQB at me and shouted, “Make it tighter! Older! Edgier!”

I knew how to make it happen. I rewrote the first three chapters from scratch, newly injected with angst, nookie, and actual three-dimensional characters and a few months later, I had a brand new baby contract.

And my husband said: “Yay! We’re getting a new mattress.” And we did.

Read popular current fiction in my genre. I wish I could put that in all caps. When I first started my writing journey, I read a lot, especially library books.

I spoke those infamous words: “I could write better than this!” Yeah, look at my competition. I was reading fiction I’d randomly picked off a library shelf, fiction that was twenty and thirty years old. The stuff that wasn’t popular enough to have a request hold on it. What does that tell you?

So I got better by writing a lot, but the biggest help was when I started to read currently hot YA titles. It was like I was blind and someone put the “tighten-prose-gripping-plot” glasses on me.

Congratulations on the publication of your debut young adult novel, Lament: The Faerie Queen’s Deception (Flux, 2008)! Could you tell us a bit about the book?

Basically, an incredibly musically talented teen girl (not based on me, thank you very much) meets an intriguing musically talented boy and proceeds to fall in love in short order. Sucks that he’s a faerie assassin, and she’s his next mark. Homicidal faeries and teen angst abound. Rated MN for Moderate Nookie and PG-13 for a decent amount of blood-letting. All in good fun, of course.

Ever since I read about fairies with homicidal leanings in Katharine Briggs‘ An Encyclopedia of Faeries (Pantheon, 1978), I have been determined to use them in young adult fiction.

From twelve years old on, I worked them into practically every piece of fiction I wrote. I was officially obsessed. I used to go out and stand beneath our beech tree and hold four leaf-clovers in hopes of making one appear.

Yes, I know. In retrospect, it sounds like a terrible idea. But back then…

Messed up, that’s what it was.

And truthfully, neither the first iteration of Lament nor its ill-fated companion book were professional enough to see the light of day, no matter how badly I might have wanted it at the time.

The biggest challenge was changing the entire manuscript from third person to first person. Because Dee is so shy, a lot of what’s going on happens inside her head, so Lament had to be totally rewritten to reflect that.

What is it like, being a debut author in 2008? What do you love about it? What has surprised you most?

It’s a disgustingly exciting time to be a new YA author, because–shock!–people have figured out that YA is hot.

In the last year, I’ve watched the young adult section of my bookstores double. No longer am I tiptoeing around Spot on the Farm to get to my YA. (No offense to Spot).

The most surprising thing is how fast my book deal has turned into a career.

At the beginning of this year, I had one book under contract. By the end of next year, I’ll have three novels in bookstores. I can’t decide if this makes me want to celebrate or wig out.

And what I love? Ohmigosh. Opening that box of ARCs and seeing my book. My book! With covers! Flux wasn’t joking–they really are publishing it!

1. Young Maggie, cut the melodrama. In your fiction and in real life. Seriously.

2. If you have a pile of form rejection letters, it’s time to stop what you’re doing instead of wasting more postage.

3. Research your agents better so you won’t pay that woman $50 to be your agent when you’re 17.

4. Sweet pea, wait til you’re in love to write a love scene. You’re only going to die of embarrassment and laughter when I (I being older, wiser Maggie) rediscover it later.

5. Continue to laugh in the face of all authority figures who tell you that it can’t be done. It works out pretty well for you, in the end.

What advice do you have for Gothic fantasy writers?

Keep it real. I always wanted to type that! No, really, I do mean it though. The more out of this world your supernatural bits are, the realer (more real?) you need everything else to be.

If we as readers feel grounded in the real world–smell the exhaust, feel the humidity on our fingers, see the chubby check out lady–when you introduce a supernatural element, we’ll go crazy with happiness. Seriously.

And also, don’t forget that setting plays a huge role in Gothic/moody fantasies. I like to imagine my novels as movies–every scene takes place in a different setting that would be easily differentiated in a movie. Don’t pick an arbitrary season or location for your novel. They’re as important as characters.

Two of my critique partners, Brenna Yovanoff and Tess Gratton, and I have a fiction blog at http://www.merryfates.com. We each contribute a piece of short fiction every week–it’s a great writing exercise.

Anyway, that’s off topic. The point is that they are ruthless with my fiction. I send them a draft and they tell me straight up how it sucks and what they think needs to be done to reverse the suck. Their honesty is absolutely crucial to me!

As a reader, so far what are your favorite young adult books of 2008 and why?

The Hunger Games by Suzanne Collins (Scholastic Press ’08) is my favorite of 2008. It’s a brutal YA that’s sort of a cross between “The Most Dangerous Game” (do teens still have to read that in school?) and “Survivor.”

The characterization is just amazing. And it’s completely addictive. I finished it in one day, gave it to my husband, and he finished it in a day. It’s going to be hot.

What do you do outside of the world of YA literature?

Before I became a full time writer this year, I made my living with my art (www.portraitswithcharacter.com).

So I still do a lot of colored pencil art when I’m not writing, and I teach colored pencil workshops. I’m also, as mentioned earlier, a music addict, and I play Celtic harp, piano, tin whistle, guitar, bodhran, and write a lot of music too.

In college, I had a Celtic band, Ballynoola, that toured around for a few years and made a now totally impossible to find album, Driven to Distraction. I have to confess that that’s my next goal…when my kids get into school, it’d be nice to have a band again and maybe throw together a nice studio album even if I never toured again.

I also like to cook. Because I like to eat. And the two go together. I try and keep food descriptions out of my novels, but I notice when I go back over them that they get in there anyway.

And of course I hang out with my husband and two toddlers (ages 3 and 4). My husband is pretty easy-care/wash-n-wear, but you wouldn’t believe how much time the two womb fruits take up.

What can your readers expect from you next? (I’m begging for a companion book here–begging!).

Beg no more! Ballad: The Gathering of Faerie (Flux 2008) is due out next fall and is narrated by another character from Lament. I don’t know if I should say who, because it’s a little spoilery–but I can tell you, Cynthia, that it’s the character you’re hoping for. It involves a king of the dead, a vampiric faerie muse, and plenty of thwarted and unthwarted love to go around.

Also, Shiver (Scholastic 2009), a love story about a girl and a boy who turns into a wolf every winter, is coming out in Fall ’09. My first hardcover and also my favorite bit of writing to date! Very exciting.