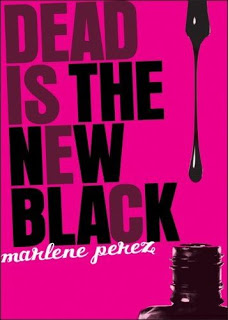 Dead Is the New Black by Marlene Perez (Harcourt, 2008). From the promotional copy:

“Teenage girls are being mysteriously attacked all over town, including at Nightshade High School, where Daisy Giordano is a junior.

“When Daisy discovers that a vampire may be the culprit, she can’t help but suspect head cheerleader Samantha Devereaux, who returned from summer break with a new ‘look.’

“Samantha looks a little…well, dead, and all the popular kids at school are copying her style.

“Is looking dead just another fashion trend for pretty popular Samantha, or is there something more sinister going on? To find out, Daisy joins the cheerleading squad….

“Dead is the New Black is a fast-paced mystery that combines romance, humor, sibling rivalry, and lots of attitude.”

I’ve been writing up a storm. I try to keep working on something no matter what. Unexpected Development was the first novel I ever completed. After that, I promptly wrote a novel that will stay in a drawer. Then I wrote Love in the Corner Pocket, which came out in May.

I want to focus on your new paranormal series, but first, tell us about Love in the Corner Pocket (Scholastic, 2008). How would you describe the story?

It’s about a love and billiards triangle, and it’s set in Laguna Beach, California, which is very close to the city where I live. I played pool (unlike Chloe, the main character in LITCP, I played it badly) when I was in high school, and I was intrigued by the idea of a female competing in a traditionally male game.

While I was writing the book, I had to learn about serious pool playing, and I spent hours watching competitive pool on television. There are some amazing female players.

Congratulations, too, on the release of Dead Is The New Black (Harcourt, 2008)! I love that it’s a genre bender–a paranormal mystery with romance and comedic elements! Could you tell us more about the book?

Dead Is the New Black is the first book in a trilogy. It’s about three sisters who solve paranormal mysteries in their California high school. I think the reason it’s a genre bender is because I love to read in so many genres myself.

The main character is Daisy, who is the youngest. She feels inferior to her two beautiful and psychic sisters and her gorgeous mother, who is also psychic.

Daisy becomes suspicious that something strange is going on at her high school when the head cheerleader returns from summer vacation with a new look and suddenly, “dead” is in.

What was your initial inspiration for writing the novel?

I love urban fantasies, paranormals, and especially vampire novels. I started reading Anne Rice novels when I was in high school and try to read everything in the vampire canon. I’m also a huge “Buffy”/“Angel” fan.

I also have a thing for protagonists who use humor as a shield. That’s definitely part of my own make-up. If someone compliments me, I immediately make a joke. Although I’m trying just to say “thank you” instead.

I’d always wanted to write a paranormal novel, and I’d been working on an outline.

One of the things that may be different about me from other writers is that I always like to start with a good title. I’m very attached to my titles, although like most authors, I’ve had to give them up occasionally. I’m thrilled that the “Dead Is” titles have stayed the same.

For some reason, Dead Is The New Black popped into my mind and then Daisy kind of just bloomed (bad pun intended) from there.

I’d just signed on with a new agent in August 2006, after he’d read the manuscript of Love In The Corner Pocket, and he asked me what else I was working on.

When I told him about my idea for Dead Is The New Black, he loved it and immediately began shopping the outline and three chapters around. It went to auction and sold to Julie Tibbott at Harcourt the day before my birthday.

A month later, he sold Love In The Corner Pocket to Abby McAden at Scholastic/Point, right after my husband’s birthday. I really like birthdays these days! So, it will be a little over two years from concept to publication.

It was kind of a surreal experience. One minute, I’m without an agent and/or a book contract, and then suddenly, I had a fabulous agent and four books under contract and only one of them (Love In The Corner Pocket) was written. And much of the credit goes to my dynamo of an agent, Stephen Barbara (agent interview).

What were the challenges (literary, research, psychological, and logistical) in bringing it to life, so to speak?

I’ve always loved supernatural stories, but I think it was a challenge to try to bring something new to the table. There are so many wonderful authors out there who write in this genre.

I did do a lot of research, especially to learn more about psychics. I love music, so it was fun to find the perfect songs for the jukebox. It was also a challenge to create an imaginary town and to give it the perfect name.

I have to confess that I asked for help in naming the town where Daisy and her family live, and my critique partner and my daughter both came up with Nightshade, which I think is just right.

Is this the first book in a series or trilogy? Could you give us some hint as to where it’s going?

Dead Is The New Black will be followed by Dead Is A State of Mind and Dead Is So Last Year. Daisy finds out something surprising about herself, and we may or may not finally find out what really happened to Daisy’s father.

What inspired you to do a multi-book storyline?

I really loved Daisy and her sisters and thought that there were more stories to tell.

And I had so much fun writing those books! When I wasn’t banging my head against the wall, wondering why I thought I could write a mystery-romance-humor-paranormal, that is.

What advice do you have for writers who’re interested in doing the same?

I read a lot of writing books about how to write a proposal. I also think you really need to like your main character because you’re going to be spending a lot of time with her.

Back in March 2006, you were still relatively new to the author’s life. What lessons have you learned since?

Don’t let either praise or criticism go to your head, give back to the writing community whenever you can, and surround yourself with positive people who believe in you.

What did you do right? What, given a chance, would you have done differently?

What did I do right? Wow, it was all such a blur! Two of the things I did right were to ask other, more experienced writers for advice and to keep a positive attitude.

One of the things I would have done differently is I would have worked on a paranormal much earlier, since I’d been wanting to write one for years.

In what areas, if any, are you still pushing yourself–both in terms of craft and publishing as a business?

I think you always have to push yourself to try new things in your craft, so I’m always looking for ways to improve and grow as a writer.

I think the best way to pick a new project is to pursue the one you’re the most scared of, to go toward the fear. I’ve heard several actors say that’s how they pick the roles they choose, and I think it applies to writing as well.

And we all have those ideas that are bigger than what we’re currently capable of, so my next goal is to work on something that will help my writing stretch and grow.

What are you doing when you’re not writing?

Hanging out with my husband and kids, going to the beach (although I’ve been on deadline this summer and haven’t made it once) and reading.

We’re all really into comic books, and just got back from the “nerd prom” otherwise known as Comic-Con.

After the Dead Is books, I have a stand-alone contemporary YA coming out with Scholastic/Point called The Comeback, which is about a girl who is ousted from the popular clique and plots her way back to popularity.