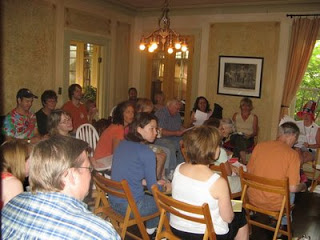 Sparkling local writers joined forces at the Awesome Austin Writers Workshop from June 27 to June 29 at my home.

The objectives were to build and nurture an already strong youth literature writing community (we rock!), to exchange ideas (we shared!), to support one another (we cheered!), to gain insights into our works in progress (we learned!), to offer a venue for advanced writers to interact and work on craft (we s-t-r-e-t-c-h-ed), and to have fun together in a respectful, upbeat forum (we partied)!

This well-qualified group–with some overlaps–included nineteen published children’s-YA book authors (including one published author-illustrator), an additional professional illustrator, four published children’s magazine writers, two former booksellers, eight educators, five students pursuing an MFA in writing for children and young adults, and one graduate of an MFA program in the same. Not every participant was published/agented; however, absolutely no one doubted that they would be soon. 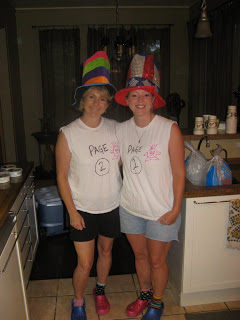 Our magnificent, charming, and unflappable pages were Donna Bratton and Carmen Oliver. They assisted us in ordering, preparing, and serving breakfasts, running errands, cleaning up, and maintaining the flow of the event in too many ways to list. Suffice it to say, they were critical to the success of the workshop.

Over the course of two and a half days, the group discussed about 30 manuscripts (a few of those with short pieces turned in two) of no more than 10 pages during 40-minute sessions. Works discussed included fiction and non-fiction, poetry and picture books, middle grade and YA novels.

The level of conversation was as high as I’ve ever enjoyed in such a forum.

The loose format worked well as everyone seemed fully prepared, willing to respectfully disagree, and sincerely invested in the process and manuscripts. 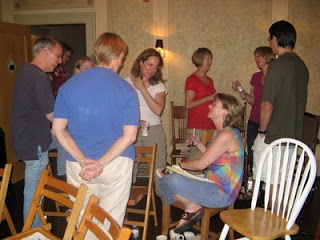 During sessions, the writer of the featured work in progress was not allowed to speak without permission. Comments were addressed to me, the moderator, and/or the group as a whole. On those rare occasions in which someone had a burning question, I decided whether the writer would respond.

I also took hands for comments, although I did occasionally call on someone without warning.

The pages acted as timers, noted any books/films mentioned as possible models, and after the conclusion of the workshop, provided a bibliography to the group. 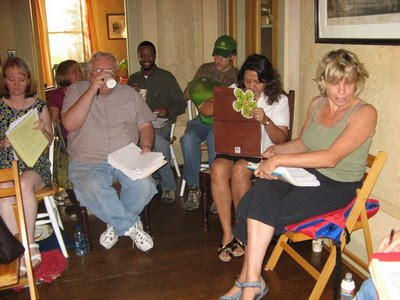 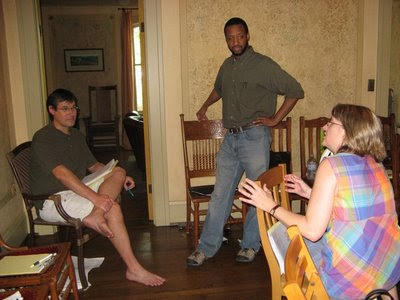 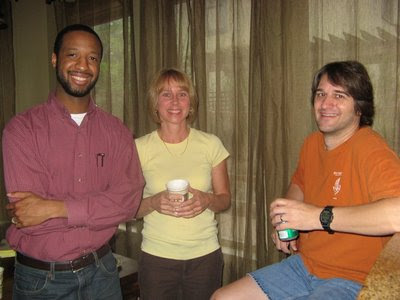 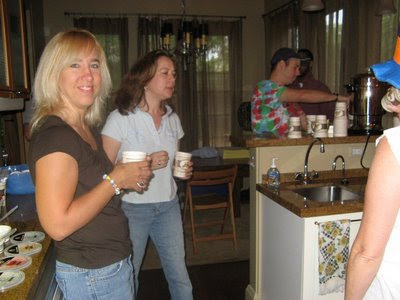 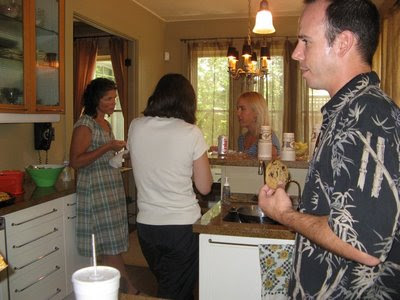 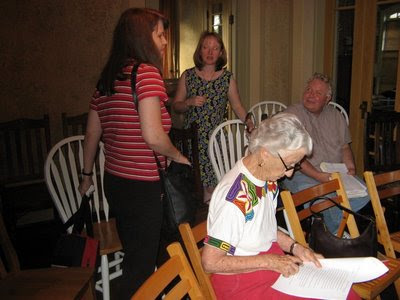 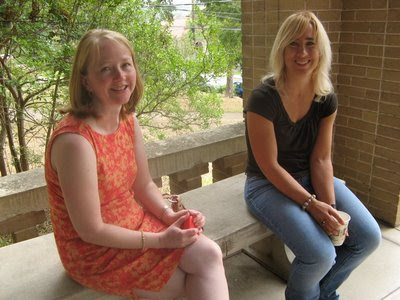 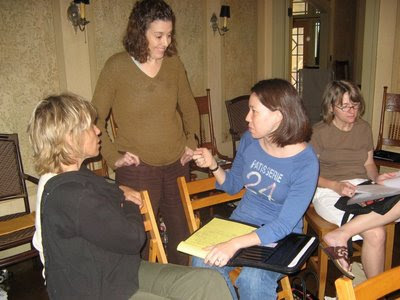 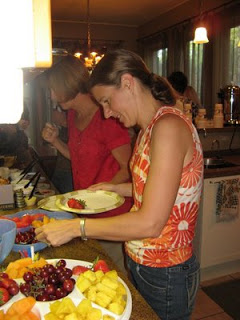 We took five minute breaks between each session, and an hour and a half breaks for lunch.

We believe in feeding “starving writers.”

Participants were sent off to find their own lunches in the neighborhood and encouraged to go with folks that they didn’t already know or know well. The pages and Greg accompanied me to The Galaxy Cafe on Friday and The Shoal Creek Salon on Saturday.

The Saturday night party was a component of the workshop itself. As with the lunches (and beyond), the idea was to informally continue the conversations of the sessions. Helen and her husband Neil were heroes of the weekend–offering their gorgeous downtown condo as party central. 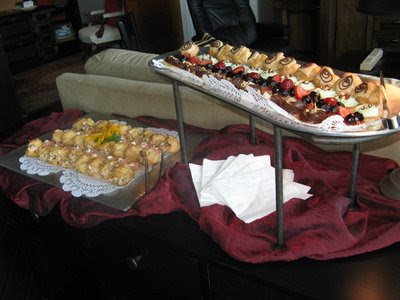 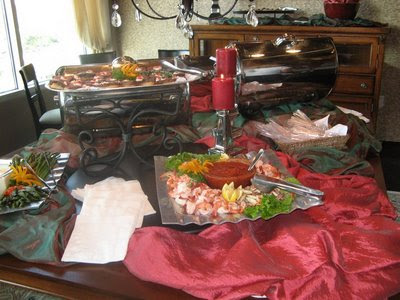 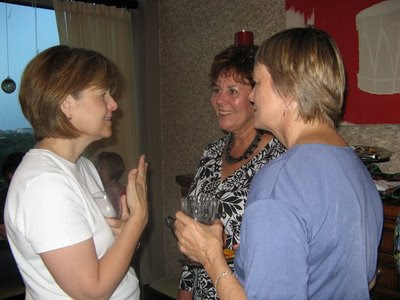 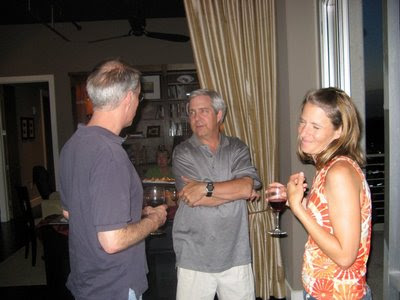 (Mark, Neil, and Meredith, the founder of Austin SCBWI). 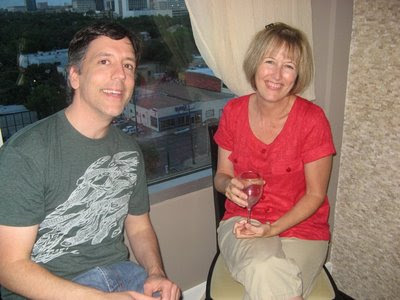 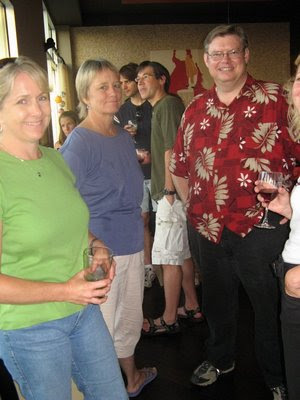 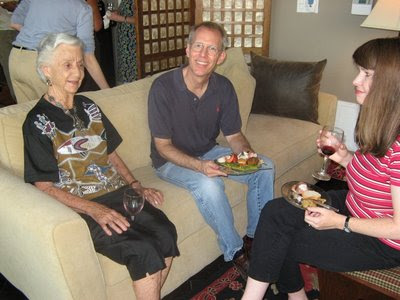 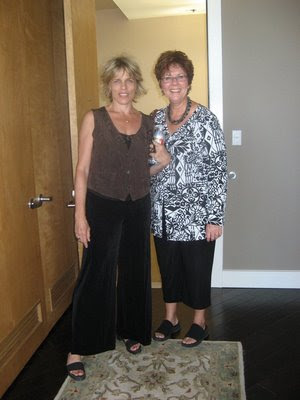 Sunday, afternoon, at the conclusion of the event, the pages were presented with thank-you gifts, and Greg and I were surprised by gifts in return. 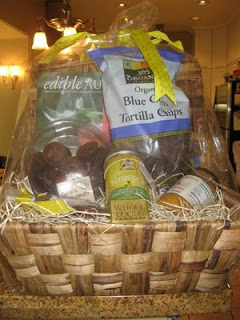 And on behalf of the participants, Jane presented us with a gift certificate to BookPeople and a “library” bird house designed by Austin writer (and VC grad) Debbie Dunn (who was invited, but couldn’t make it). It’s simply remarkable! The scene features mini versions Tantalize as well as April’s The Latent Powers of Dylan Fontaine (Delacorte, 2008), Jane’s That Special Little Baby (Harcourt, 2007), Greg’s Ninjas, Piranhas, and Gallieo (Little Brown, 2005), Brian Anderson’s Zack Proton (Aladdin, 2006-), Brian Yansky’s Wonders of the World (Flux, 2007), Helen’s Long Gone Daddy (Front Street, 2006), and both There’s a Yak in My Bed by K. Pluta and Austin illustrator Christy Stallop (Blooming Tree, 2007) and The Lucky Place by VC graduate Zu Vincent (Front Street, 2008). You can see it on Greg’s blog.

Thanks again to: pages Carmen and Donna; Tim, Frances and Brian, Gene, and Shana for the chairs; Tim and Donna for the coolers; Meredith for the personal shopping; Anne for the paper towels; Helen and Neil for hosting the party; and AAWW participants and pages for the lovely gifts; and everyone who played a role in creating workshop magic!