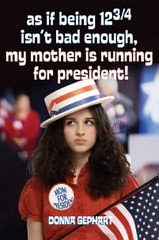 My family didn’t have much money, so riding my bike to the public library provided hours of free entertainment. I could rarely narrow my selections down to the twelve books that patrons were allowed to borrow. As a young child, I also didn’t have many friends. The characters in books often kept me company.

Why do you write for kids today?

So that I can provide that “temporary friend” for young readers today. Books also provide a bridge for children to feel empathy and develop understanding for those who are different or live differently than they do.

Children often feel powerless. But the books they read show young fictional heroes as powerful in the way that they have control over their destiny. Characters make mistakes, but learn and grow and achieve their goals through their own initiative. I think that empowers young readers to believe they can affect a change in their own future.

I’ve written an article for the 2009 Children’s Writer’s and Illustrator’s Market (edited by Alice Pope) (Writer’s Digest Books, 2009) called “Six Reasons You Should Quit Writing and One Very Important Reason You Shouldn’t.” I gave a speech at the FL SCBWI in Miami this January called, “Don’t Quit.” Does this give you an idea of my path to publication?

I believe it takes at least a decade of reading, writing, revising and rejections to become an “overnight success.”

I started writing short–greeting cards, puzzles, jokes, etc. Then I tried my hand at funny essays and stories, some of which appeared in Highlights for Children and Family Circle Magazine.

Eventually, I took the plunge and wrote novels. Sometimes, I wish I’d started writing books for children sooner. But perhaps a direct route isn’t always the best path. I learned a lot about writing succinctly and shaping my fiction from the other types of writing I did.

Joining and later leading critique groups helped me grow most as a writer. I think it’s true that good writing is not written but rewritten.

When I first attended critique groups, I was in awe of those who could offer solid advice on story structure. It took years of hearing their words in my mind to develop my ear for fine-tuning story structure in my own work and the work of other’s.

Also, spying. I love people-watching at the airport or the mall. I’m forever eavesdropping on people’s conversations and observing how they interact with one another. That helps me write scenes where tension develops between characters. It also helps me write dialogue that seems genuine.

Congratulations on the publication of your debut novel, As If Being 12 3/4 Isn’t Bad Enough, My Mother is Running for President! (Delacorte, 2008)! Could you tell us a little about the story?

I’m really excited about this story and the response it’s getting from young readers. One girl told me she liked the book so much that the moment she finished it, she started over and read the whole thing again. Letters like those make the long journey worthwhile.

A brief summary: Preparing for spelling bees, having a secret admirer, and waiting for her chest size to catch up with her enormous feet are pressure enough, but Vanessa Rothrock must also deal with loneliness and fear as her mother, Florida’s Governor, runs for President of the United States.

Young readers will learn about primaries during this election season as well as the trials and t-r-i-b-u-l-a-t-i-o-n-s involved in competing in spelling bees. All the while, they will hope for this klutzy character to come to terms with herself, her mother’s campaign and ultimately find the courage to thwart an assassination attempt.

I’d initially written this as a short story for an anthology seeking pieces about mother/daughter relationships. Members of my critique group and my agent really liked the voice and encouraged me to turn the story into a novel.

When coming up with the initial idea, I remembered a myth that Chelsea Clinton, when she was ill, told the school nurse to call her father because her mother was too busy. My research showed that what really happened was that Chelsea Clinton needed medication, and the school’s policy is to get parental permission. Chelsea reportedly said, “Call my father. My mother is out of town.” Decidedly less amusing, but the impetus for my story about a girl whose mother is often too busy to attend her spelling bees or show up at the hospital when she breaks her wrist in P.E. class.

Once Tina Wexler, my agent at I.C.M., submitted it, we received an offer in about three weeks–in April 2006.

Even though the book sold in early 2006, it wasn’t released until nearly two years later–February of 2008–to coincide with the election season.

Staring with a blank page and ending with a novel is never an easy endeavor.

This particular book required quite a lot of research. I read dozens of books and reviewed many Web sites about campaigning and the political process. I interviewed a spelling bee champ who made it to the bee at the national level twice. I searched for obscure words to include in my fictional spelling bees. I enjoyed the research because I learned about worlds different from my own. And the revisions, although challenging, were very rewarding as I watched the current book take shape.

So, what is it like connecting this timely book to young readers in an election year? What special opportunities does that present?

It presents a great opportunity to let young readers know about the election process in a fun way.

This is such an exciting, historic election that it’s wonderful to be involved in connecting young readers to the process. I wish a book like this were available when I was a kid because then it wouldn’t have taken me so long to become excited about and involved in the political process.

The interesting thing about having a book released is that it opens up a whole different set of opportunities. Now instead of spending my time reading, writing and revising, I’m still doing those things, plus I’m giving interviews, speaking at conferences, doing presentations at schools and libraries–a whole new aspect of the business.

Be patient. It takes more time than you’d like.

Have faith. There is a light at the end of the tunnel, and it’s not an oncoming train.

Work hard. Seeing a youngster clutching your book is way more exciting than catching up on the latest “Lost” episodes.

Dream big. But enjoy the journey because spending time in the company of your imagination is a fine way to pass a few hours each day.

Please tell us about your blog, Wild About Words–your approach to blogging, your focus, why it’s important to you?

I started blogging July 2007 and love it. I’ve connected with so many interesting people through my blog. I have a Web site, which is nice for someone to learn more about me and my book, but a blog is current and constantly updated. It’s a great way to let people know what’s going on with the book, pass along writing tips and advice or share in someone else’s success.

As I write this, my desk is piled high with a full calendar, notes for an upcoming school presentation, lists of people I need to contact for publicity, empty dishes from the lunch I ate while working, etc. Balancing the new demands of promotion and speaking with my love of quiet, uninterrupted writing time and time for family and friends is something I work on daily. If anyone has any advice, I’d love to hear it!

As a reader, so far what are your favorite books of 2008?

I have a stack of new books by my bed that I’m eager to read. E. M. Crane’s YA novel, Skin Deep (Delacorte, 2008)(excerpt), really moved me. Great characters, touching story. I’m still in awe of Sherman Alexie‘s The Absolutely True Diary of a Part-time Indian (Little Brown, 2007) from last year.

Long walks. And bike rides. The weather in South Florida is fantastic this time of year. And there are always interesting creatures–turtles, ibises, alligators (gulp), geckos, hawks, etc.–to enjoy watching. And the hibiscus and bougainvillea are also lovely. Luckily, we live close to the beach, too. When I’m not outside, I enjoy playing Scrabble with Hubby. Our teenage boys are a lot of fun. And I always love reconnecting and sharing a laugh with friends.

I have a top secret project on my agent’s desk right now. It doesn’t involve politics, but it does involve a boy who wants to become a famous talk-show host like Oprah, that is, if he can survive his first year of junior high school!