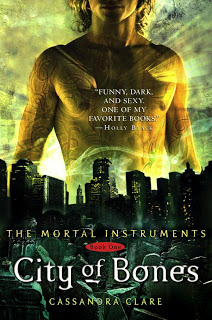 From Cassandra Clare’s website: “I’m a writer from Brooklyn, New York. I am a huge fan of fantasy and Gothic horror, and my first fantasy novel for young adults, City of Bones, was published this March by Simon & Schuster. The next book in the series, City of Ashes, will be released in March 2008 and the third, City of Glass, will come out in March, 2009.” Read Cassandra’s journal, and visit her MySpace page. Visit the official Mortal Instruments website. Don’t miss these additional related links!

Really, really quiet, which is always a shocker for people who know me now. I was the quiet kid in the corner, reading a book. In elementary school, I read so much and so often during class that I was actually forbidden from reading books during school hours by my teachers. I’ve always thought that was something of a counterproductive measure. I mean, shouldn’t you want kids to read? Admittedly maybe not during biology class.

What inspired you to write for the young adult market?

I don’t think I ever intended specifically to write for the young adult market. It’s just that when the idea for City of Bones came to me, I knew the main characters were teenagers. I even had an editor at some point express interest in the manuscript and ask me if I could age the characters up to make it an adult novel. I thought about it and said, “No, I don’t think I could.” In my mind they were just very clearly the ages they were, which turned out to mean it was a YA novel.

If you could go back to your apprentice writer self, what would you tell her?

“Don’t be so hard on yourself,” I guess. I thought everything had to be perfect before I could show it to anyone, which means I never got any feedback on anything, and without feedback I couldn’t work on improving. It was a vicious cycle. Eventually, I learned to share work with people even when it was in its rough stages without worrying that they’d be filled with scorn and hatred. After all, I can read their rough work without turning on them like a wildebeest.

Congratulations on the publication (and best-selling status) of City of Bones (Book One, The Mortal Instruments)(McElderry, 2007)! What was your initial inspiration for writing this story?

Well, I had the idea for the romances and the twist at the end, before I had the general idea of doing a series where the magic system revolved around tattoos. And that came from a friend of mine who worked in a tattoo shop in the East Village. I was in her tattoo shop looking through the flash book–not that I have any tattoos myself, as I am not that cool, but I find them fascinating–and I got this idea about skin runes that offered protection against demons and how neat that would be. And then I thought, I should combine these two ideas.

What was the timeline from spark to publication, and what were the key events along the way?

I started writing the book in early 2004. After almost a year of endless revisions I had — not a complete book, but about ten chapters. I had met my agent, Barry Goldblatt, at a reading at the KGB Bar in Manhattan; he represented a friend of mine, and she introduced us, and told him I had this novel I was working on that she really liked. He agreed to take a look at it, and offered representation based on those ten chapters. He had me revise them again, and then we sold the book off those chapters and a detailed outline of the plot of the next two books in the series.

Well, City of Bones was my first novel, and I’d just never written anything like it before. It went through dozens of revisions–this was before I trained myself to write straight through, so I’d start a chapter, then go back and revise it, then write a little more, then go back and revise from the beginning again. Essentially I was just rewriting the first chapter over and over, and never figuring out what happened next.

Finally I decided to skip the beginning entirely and write through from chapter three, and for whatever reason that worked for me–I was able to work through building the world, and then go back later and establish that world more fully in the beginning, because now I really knew it.

Write what you want to read. So many people think they need to write a particular kind of book, or imitate a successful style, in order to be published. I’ve known people who felt they had to model their book on existing blockbusters, or write in a genre that’s supposed to be “hot right now” in order to get agents and publishers interested.

But if you’re writing in a genre you don’t like, or modeling yourself on a book you don’t respect, it’ll show through. You’re your first, most important reader, so write the book that reader really wants to read.

How about those writing YA urban fantasy in particular?

A lot of people feel like urban fantasy is a shortcut that gets you around world-building, because it’s set “in the real world.” But it doesn’t really work that way, as I found out. You have to come up with just as consistent an internal cosmology and magic system as you would if you were writing high fantasy. 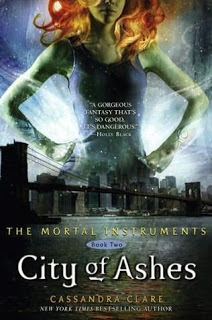 I love to travel. In March I’m going to England, Ireland and Italy; in April, I’m going on book tour, and then in May, I’m going to Tuscany and to spend two weeks writing in Paris. My boyfriend always says that if it weren’t for him I’d probably get rid of my apartment and live nowhere, and he’s right.

Well, City of Ashes, the sequel to City of Bones, will be out this month. I’ve also got a short story coming out in the Little, Brown anthology Geektastic, about online role-playing games of all things, and then a short story in the HarperCollins anthology Vacations from Hell. Then City of Glass next March.