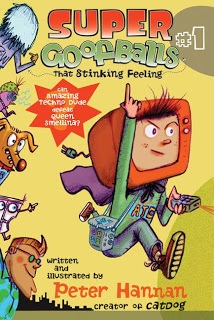 Peter Hannan is a writer, producer, and artist. He is the creator and executive producer of the Nickelodeon animated series, “CatDog,” overseeing all aspects (writing, storyboarding, character design, art direction, post-production) of a hundred and twenty-something 11-minute episodes and holiday specials. He produced “Fetch,” the “CatDog” theatrical short and a ninety-minute TV movie called “CatDog and the Great Parent Mystery.” He wrote and sang the “CatDog” theme song, which he will sing for you even if you don’t want him to. He wrote many other songs for the series, five of which are included on “The Newest Nicktoons” from Kid Rhino.

Next up is a picture book and another series of middle-grade illustrated novels—also for HarperCollins—called Wally, King of Flurb in which an Earth kid is abducted by aliens and taken to the planet Flurb, where—to his utter amazement—instead of being eaten or at least vaporized, he is proclaimed king. 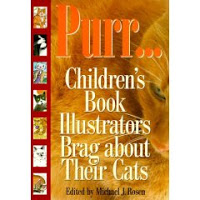 Hannan wrote and illustrated The Sillyville Saga: Sillyville or Bust, Escape from Camp Wannabarf, School After Dark: Lessons in Lunacy, and The Battle of Sillyville: Live Silly or Die! He contributed stories to the anthologies Speak! Children’s Illustrators Brag About Their Dogs and Purr! Children’s Illustrators Brag About Their Cats. He has written and illustrated newspaper and magazine pieces with titles like “The Incredible Shrinking Christmas;” “The Good, the Bad, and the Irish;” and “Mike Royko Moves to the Suburbs.” He has done lots of illustrations for newspapers, magazines, books, and advertising. His single-panel cartoons (The Adventures of a Huge Mouth) have appeared in Harper’s, Esquire, the Chicago Reader, many other periodicals, and in a book from Chicago Review Press. He has exhibited his paintings, illustrations, and cartoons. His work has been transformed into everything from toys to T-shirts to cheese crackers.

He grew up on the Erie Canal in upstate New York, where he had a three-legged dog, named Tipper, who once got his front paw caught in his collar and ran home using two legs on the same side of his body. Hannan lives in sunny California with his perfect wife and kids, except when it’s rainy California and then they get kinda pruney.

How did you come to this point in your career?

When I came out of college I had a vague romantic notion of being a painter, but I really had no plan. Actually, that’s not true…my plan was to be a starving artist. And for a while I had great success at that.

On the side I did everything from manage a revival movie theater to produce TV shows with Chicago blues musicians. I had a partner and we shot concerts with Muddy Waters, Albert King, Buddy Guy and Junior Wells, and many others, and tried to produce other TV stuff, but none of it led to what you’d call financial gain.

Then I got married and we were expecting our first child and it occurred to me that there might be certain advantages to actually making money. I got together a portfolio of illustration and started doing lots of editorial work for magazines and newspapers, some advertising work, and then a single-panel cartoon called the Adventures of a Huge Mouth for the Chicago Reader and subsequently lots of other periodicals around the country.

Then I did some kids’ books, one of which—Escape From Camp Wannabarf–got optioned as a feature film and was in development for several years. It never got made, but since I’d gotten a Hollywood agent, I started pitching movies and TV shows.

This eventually led to CatDog and moving to Los Angeles. It was a wild, fantastic experience because I went from working alone in a dungeon-like studio in the basement of my Chicago house, to having a huge crew in Burbank–and another in Seoul–all working to realize my vision. TV is a hugely collaborative process, but similar to the newspaper business with its crazy deadlines and frenetic energy.

Anyway, since then I’ve developed lots of shows, and I’m working on some new TV things now, but writing and illustrating these chapter books (Super Goofballs and Wally, King of Flurb) has been sort of a welcome homecoming to the more sane and solitary world of a writer-illustrator. No crazed crewmembers or hysterical network execs (don’t get me wrong, I love them all)…just me in a room with a computer, a big jar of pencils, and a great editor three thousand miles away.

Congratulations on your new Joe Hemingmouse cartoon at JacketFlap! Could you tell us a little about it?

Joe Hemingmouse is a weekly single-panel cartoon about a hardworking, hard-struggling writer-illustrator mouse, who wants desperately to break into the children’s book world. He is talented, but he really doesn’t know what he doing. His confidence level can go from supreme to zero in two seconds.

How did you come to be doing this?

I stumbled upon JacketFlap and really liked it. Tracy [Grand, CEO of JacketFlap (interview)] and I exchanged a few emails, and she asked if I’d be interested in creating some content for the site. I immediately thought of doing a single-panel because, since the site is all about writers and illustrators, I thought it would be perfect to combine words and pictures in a bite-sized package. Plus, I missed doing this kind of thing.

What can readers expect?

I’m not completely sure where Joe Hemingmouse’s journey will lead. I know the road will get a little rocky along the way, because it does for almost everyone.

What do you love about this kind of project?

I love that Joe really wants something. He is absolutely driven. He is naïve and will make lots of mistakes, but he will never, ever, ever give up. He may be an undiscovered genius or just a dreamer or both. I love being able to develop a character like this…revealing him little by little, not just to readers, but to me and even to Joe himself.

Time is always a challenge. That’s one of the hardest things about all this stuff—figuring out when to work on what. I’ve got a lot on my plate now, but I really love doing this cartoon and there’s tons of material—from real life and almost-real life—to go on indefinitely.

Congratulations on the Super Goofballs series (HarperCollins, 2007-)! What was your initial inspiration for creating these books? What was the timeline from spark to publication, and what were the major events along the way?

Back in the early nineties, I did a book proposal called “A Few Superheroes You’ve Probably Never Heard Of.” It didn’t get published—I only really showed it to one editor—but all these years later I came back to it and changed the name to Super Goofballs.

It’s about a superhero kid (Amazing Techno Dude) and his crazy-but-loving superhero grandma (the Bodacious Backwards Woman), who are flat broke and need to take in roommates. They end up taking in lots of borders—all ridiculous superheroes.

Originally, one of the characters was a two-headed guy called Amazing Catdog Man. He had a man’s body with a cat and dog head on its shoulders. He/they would try to save the day, but never succeeded because they couldn’t stop fighting with each other.

I fell in love with the idea of opposite personalities stuck together in one character and that eventually led to a little detour called CatDog.

Together, the Super Goofballs must save Gritty City from a motley crew of deliriously evil super villains: Queen Smellina—The Shrieking Stinkbug of Stench, Fabian the Flatulent Fiend, Mondo Grumpo, LaundroManiac, Supreme Commander Cockroachia, Antglop the Awful, Ratzorg, Dr. Killdream, the Big Bad Blob of Blah, and others too numerous and disgusting to mention.

A lot of my advice tends to be a bit clichéd, but sometimes clichés exist for a reason. Working for yourself in these kinds of creative fields is really like perpetually looking for a job. It can be nerve-racking, and it’s not for everyone. But it can be very rewarding.

The main thing is to know that rejection is part of the package. You need to look at rejection as your friend and use it as fuel to fight back and fight on. Because no matter who you are, most of what you think up will never see the light of day, at least not immediately. You need to keep drawing, writing, acting, singing, whatever.

I have always been a compulsive scribbler, and I have sketchbooks full of ideas for stories and characters and projects. Never throw anything away. Things have a curious way of resurfacing.

Plus, I think you need an agent who loves your work and is comfortable—more comfortable than you—in singing your praises. Self-promotion is more unseemly and time-consuming than having someone else do it for you. And the agent needs to be well connected and have real relationships with real editors and publishers.

Part of it is also figuring out what you can do that others can’t…how you are uniquely suited to tell particular stories and/or make particular art. When I first started doing illustration, I tried to figure out what people wanted and then put that into my portfolio.

One day I realized that if I succeeded, the dream would have turned into a nightmare: I’d have plenty of work doing something that I didn’t care about or even really want to do. From that day forward I have tried to do it my way…in art, writing, books, TV, etc. It hasn’t always worked…but, luckily, sometimes it has. 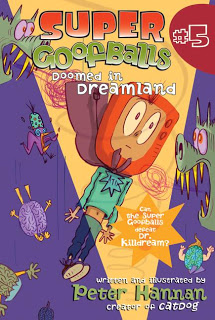 Super Goofballs #5: Doomed in Dreamland is next. In this one, Dr. Killdream is out to single handedly destroy the dreams, daydreams, and hopes and dreams of all the Goofballs and—oh right—all of mankind. Then there’s Super Goofballs #6: Battle of the Brain-sucking Robots in which The Big Bad Blob of Blah, a vile villain of vast proportions, is hell-bent on enforcing worldwide conformity and despises anyone who dares to be different. Clearly the Super Goofballs are a threat to his worldview.

Right now I’m working on the first book in my new series Wally, King of Flurb and a picture book and a few TV and other projects I can’t talk about yet.

One of my dreams is to become a rock star when I’m eighty.