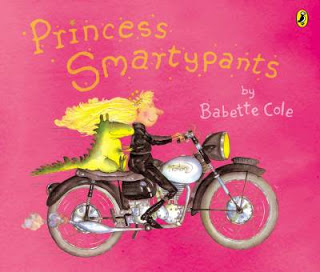 Babette Cole is the author and illustrator of over 70 books, including the Princess Smartypants series, Dr. Dog, The Hairy Book, The Smelly Book, The Slimy Book and The Trouble With… series. She owns a stud farm in England and breeds Show Hunters, which she rides herself, and has won several horse-show competitions. She was interviewed in November 2007 by Anita Loughrey, as one of the speakers at the SCBWI Bologna Conference 2008 (scheduled for March 29 and March 30 in Bologna, Italy).

What other jobs have you had (that led to being a writer and illustrator)?

BC: None, I have always been a writer and illustrator.

BC: All sunshine, ponies, books and pictures.

BC: Alice in Wonderland.

BC: All Harry Potter books because they have done so much for promoting children’s literacy.

BC: About half an hour for some and six months for others–it depends on the book.

BC: Getting someone to look after my horses so I have time to work on my books.

BC: I need to be completely isolated and very quiet with no interruptions.

How do you divide your time between working on your stud farm, competing in your side-saddle team, writing, illustrating and doing author/illustrator events and workshops?

BC: With great difficulty and little sleep.

Are any more of your books being made into films or adapted for television?

BC: Princess Smartypants and a further Doctor Dog series are in the offing.

Your fiction and illustrations have been described as quirky, goofy, zany and anarchic. How would you describe them?

BC: True to type.

What destinations have you traveled to, to research your books?

BC: Okavango Delta in Botswana, a lot of influence from the West Indies,Australia, and most importantly, the depths of my imagination.

BC: In the present climate of the times, it is most important that writers market themselves. A good website is essential.

BC: I don’t have a blog but I have a good website where people put forward questions that I answer.

BC: My most favorite fan mail was from a lady whose daughter was suffering from cancer and had had chemotherapy, hence she had no hair. She wrote me a lovely letter saying how much the hairy book had helped her daughter. The last pages, reading:

“Hairy Big and Hairy Small, I’m glad I have no hair at all.”

I was so pleased that my book gave comfort to this little girl.