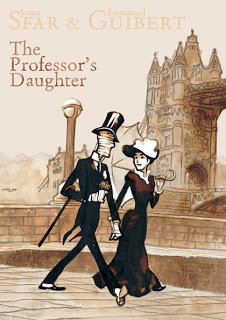 Emmanuel Guibert is a talented comic author whose works include The Professor’s Daughter, Sardine in Outer Space, La Guerre d’Alan and Brune. He lives in France with his family. Anita Loughrey interviewed him in November 2007, as one of the speakers at the SCBWI Bologna Conference 2008 (scheduled for March 29 and March 30 in Bologna, Italy).

Are you a writer as well as an illustrator, and, if so, which comes first, the images or the words?

EG: Yes, I write and I draw. But writing and drawing don’t race with each other, so no one comes first. They are like Mom and Dad, very different, very close in one’s heart, and impossible to say whom one loves the most (last time I did it, it’s been big trouble).

EG: I draw with anything. And technique is a matter one can only deal with a tool in the hand. I’d rather show you, someday, than heavily write about it.

If you were to illustrate yourself, what would you look like? (please feel free to draw yourself — animal, plant, mineral!)

EG: My daughter draws me much better than I do. See below:

What is the hardest thing about being an author and illustrator for you?

EG: Success, fans harassing me at the grocery store.

EG: I always wanted to draw.

EG: Do you suggest I should try another job?

Do you have a favorite children’s book that you wish you had written and/or illustrated? Why?

EG: Marcellin Caillou by Sempé and The Giving Tree by Shel Siverstein. I don’t wish I had written them; I just adore them.

EG: My lifetime. I’d rather go back to work than answering this Q&A because there’s a deadline I can’t exceed.

EG: I’ll let you know when my childhood is over.

EG: Yes, all of that at the same time. And even asleep.

EG: I only work with beloved brothers. A bed of thornless roses.

How did you become a comic book writer-illustrator?

Your books are often historically based, such as The Professor’s Daughter portraying Victorian London, and Brune and ‘La Guerre d’Alan’ depicting Nazi Germany. How much research do you have to do before you start your illustrations?

EG: I have a time machine. But it’s top secret.

EG: I don’t work commissioned. And when I ask myself how I am going to illustrate the book I’m working on, eventually, it never looks like my plans.