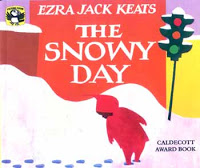 From the official news release:

“Children need to learn, and they need to love learning. Instilled with a passion for acquiring knowledge for themselves,” states Dr. Deborah Pope, Executive Director of the Ezra Jack Keats Foundation, “a child can achieve almost anything.

“It is an inspired educator who can act as the living link between children and the books that can change their lives. It is the imagination of the educator that these grants are designed to support,” continued Dr. Pope.

This will be the twenty-first annual call for grant proposals by the EJK Foundation, founded by Ezra Jack Keats, the renowned author and illustrator of such books as The Snowy Day (Viking, 1962) and Whistle for Willie (Viking, 1964). The EJK Foundation has awarded over half a million dollars in grants since the minigrant program was started in 1987,to public schools and libraries in all 50 states and the US Commonwealth.

The deadline for submission of proposals for the $500 Minigrant award is September 15, 2008. Proposals are read directly after the September deadline and announcements will be mailed out in early November. Applications are only available online at the Foundations website: [www.Ezra-Jack-Keats.org/programs/minigrantapp.pdf].

Dr. Pope urges educators to wander around the various pages of the EJK website, after printing out their minigrant application, “There is a great deal of information about Ezra on our site. Equally interesting is the background information on the role his books have played in the classroom and in the growing importance of quality picture books for children around the world.”

Author Julie Bowie has redesigned her website! Julie’s next book is My New Best Friend (Harcourt, 2008).

New Agent Interview: Sarah Davies of Greenhouse Literary from Alice’s CWIM blog. Here’s a sneak peek: “If I were an author seeking an agent, I’d be asking these questions: Is this agent well connected? Do they really know the industry? Do they understand a writer’s craft–and will they be looking to my long-term interests rather than just making a quick deal?” Learn more about Greenhouse Literary Agency.

Jump the Cracks (by Stacy DeKeyser (Flux, March 2008)) autographed ARC giveaway were a YA reader in Florence, South Carolina; and a YA librarian in Corona, California! Congratulations to the winners, and thanks to all who entered! Note: I had a couple of queries about international entries, given the price of postage. No worries! If an international winner is drawn, I’m happy to splurge! Look for more giveaways on Cynsations in the future!

Congratulations to E. Lockhart on the forthcoming release of The Disreputable History of Frankie Landau-Banks (Hyperion, 2008)! Read a Cynsations interview with E. Lockhart.

Catching Up With Alaya Dawn Johnson from Coe Booth at The Longstockings. Here’s a sneak peek: “There’s a certain element of the invisibility of privilege, I suppose. But if nothing else, the more fantasy that’s published with non-white characters, the more non-white fans will feel welcome in the genre.” Visit The Longstockings at MySpace!

Jenny Han also interviews Editorial Anonymous at The Longstockings. Parts one and two are now available. It looks like part three is still forthcoming. Here’s a sneak peek: “…it’s not uncommon to have to talk to authors about developing secondary characters’ backstory in the author’s own head. That backstory isn’t going to come out in the text in more than small hints, but it makes a meaningful difference to the author’s attitude toward those characters, and that definitely does come through in the text.” Visit The Longstockings at MySpace!

Subscribe to Notes from the Horn Book: News About Good Books for Children and Teens! Read a Cynsations interview with Horn Book editor Roger Sutton.

Congratulations to the winners of the 2007 Cybils, and thank you to everyone who worked so hard behind the scenes! Read a Cynsations interview with YA winner Barry Lyga.

Thanks to everyone who has helped spread the work about the ongoing SCBWI Bologna 2008 series here at Cynsations! Check back Monday and beyond for more insightful question-and-answer interviews with agents, editors, authors, and illustrators about the U.S. and international youth publishing scene.