When Fish Got Feet, Sharks Got Teeth, and Bugs Began to Swarm: A Cartoon Prehistory of Life Long before Dinosaurs by Hannah Bonner (National Geographic, 2007). Ever wonder what the world was like before the dinosaurs? In this lively picture book, author-illustrator Bonner tells of the Earth during the Silurian and Devonian periods of the Paleozoic Era, from about 430 million years ago to about 350 million years ago. Filled with fun facts about the evolution of fish, the development of forests, and how animals got feet. A quirky and engaging introduction to the development of life on land. Recommendation by Greg Leitich Smith. 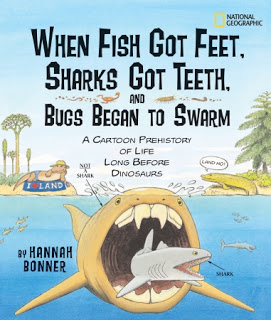 Congratulations on the release of When Fish Got Feet, Sharks Got Teeth, and Bugs Began to Swarm: A Cartoon Prehistory of Life Long Before Dinosaurs (National Geographic, 2007)! Could you fill us in on the book?

When Fish Got Feet (I usually abbreviate it since the full title is ridiculously long) tells the story of life in the Silurian and Devonian periods. At the beginning of the book, the oceans are teeming with life, but dry land is almost completely empty. We follow the evolution of plants as they gradually make the planet green and fertile. Many invertebrates come onto land as well, and we also see how one group of fish develops legs and crawls out of the water to join the fun.

I’m going to have to backtrack for a moment here. About five years ago I was having a series of conversations with Nancy Laties Feresten (editor interview), my editor at National Geographic, about doing a book about life in the distant past. 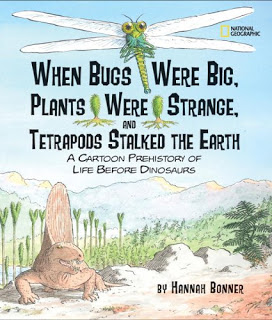 I was eager to delve into paleontology, which had always fascinated me, and Nancy had been reading about the cool giant insects of the Carboniferous period and thought they would be a great subject for a book. There was additional motivation in the fact that while there were zillions of books about dinosaurs, there were almost none about what came before them.

In the end, I decided to cover two periods, the Carboniferous and the Permian, and the result was When Bugs Were Big, Plants Were Strange, and Tetrapods Stalked the Earth, which appeared in 2003.

Once it was clear the When Bugs Were Big was selling nicely, I was asked to do a second book, and started to work on When Fish Got Feet, which is actually a “prequel” to the first book.

Research the single most important part of the project. I read all sorts of books and articles and more importantly, corresponded with scientific advisers specializing in Paleozoic invertebrates, vertebrates, plants, and geology.

I had to understand what I was trying to tell and also find out what these ancient worlds looked like. Research for illustrations is more demanding that research for writing. You can write about a fish without knowing whether its top fin is pointy or rounded, but to draw it you have to get really specific, and you also have to be able to imagine your subjects in 3D so that you can show them from whatever angle suits a particular illustration. This is true whether the subject is an animal, a plant, or a landscape.

Doing the research was a challenge, but not an unpleasant one. Corresponding with the various scientists was especially rewarding, they were all extremely helpful and generous with their time and knowledge.

My biggest overall challenge in doing the book was time management, as I’m easily distracted and tend toward “deadline-itis,” meaning a progressive acceleration of my pace of work as the deadline approaches, instead of a sensible steady pace all along. The last several months, when I was painting the final illustrations, were a marathon.

How did you approach the illustrations and why?

I work up the text and the ideas for pictures simultaneously. The beauty of being author-illustrator is that I can decide as I go along what to tell in pictures and what to describe in the text, or I can choose to combine both by adding informative labels or captions to illustrations. The cartoons are another case of the text and the image being inseparable. They are the most fun to do.

Technically speaking, I work the old-fashioned way: pen-and-ink and watercolors on watercolor paper. I sometimes add a bit of color pencil at the end.

What age level is the intended audience, and how did you address its specific needs?

When Fish Got Feet is intended for middle school-age kids. As far as addressing their needs, my inner eleven-year-old is alive and well and wrote the book for me!

I’m only half kidding. This is how I like to tell a story, regardless of who it’s for. The only adjustment was to keep explanations relatively simple. My editor helped by getting me back on track whenever I got carried away with the details of some complex topic or used vocabulary that was too difficult. In any case, I think the book works for older kids and even for curious adults as well, since it packs a lot of information between cover and cover.

In what ways is the book teacher-librarian friendly?

It takes little-covered subject matter and presents it in (I hope!) an appealing way. Also helpful are a “where to learn more” section, a list of the sources I used, and an easy-to-read timeline of life on Earth.

Could you describe your apprenticeship as an author-illustrator? How did you build your skills on each front?

I was an illustrator long before I became an author. I still think of myself primarily as an illustrator, but one who likes to tell a story in images and add text to them as needed.

I’ve been drawing non-stop since I was a toddler, and have worked as an illustrator for many years. I’ve illustrated all sorts of things–early readers, science-oriented educational materials, Majorcan folk tales, images for cookie packages, sea birds, fish, you name it.

Over the years, I have been able to shift more and more into drawing only what I love, which is biology, paleontology, and the natural world in general. My biggest illustration job was researching and drawing over 200 illustrations for the Scholastic Science Dictionary that came out in 2000. It was also how I started to work for Nancy Laties Feresten, who at the time was working at Scholastic.

I have sometimes thought that had it been the other way around, if I had been an experienced writer but new to illustration, it would not have worked. I had the excellent help of editor Marfé Ferguson Delano (who is also a children’s book author in her own right) to whip my imperfect text into shape. Besides, even someone who isn’t a professional writer may in fact spend a lot of time writing. Drawing is different. If you haven’t spent years and years honing a sense of design and the necessary drawing and painting skills, you are unlikely to be able to take on a project like this one.

What I deliberately didn’t do was try to figure out how other authors handle writing nonfiction for kids. I figured that I was better off turning my lack of experience into a plus: I didn’t self-censor as I wrote, figuring that if I wrote it however sounded best to me it would at least have a certain freshness and would be more original.

If you could go back and talk to yourself when you were a pre-published writer-illustrator, what advice would you offer?

This is a hard one! I guess I would reassure myself that I was heading in the right direction and that chances would present themselves to put my various disparate talents and loves to work.

Which picture books would you suggest for study and why?

I can’t really say, there are so many good ones. I can say that some of my biggest influences have been Larry Gonick‘s “cartoon guide” books, and the paleontological illustrations of Douglas Henderson in books such as Living With Dinosaurs or Dinosaur Tree.

What do you do when you’re not writing or illustrating?

I walk to and from my studio (about 25 minutes each way–sometimes I cheat and take a bus part of the way), so part of every day I spend walking through town. On weekends, I sometimes go hiking with friends in the beautiful mountains of Mallorca. And I must admit that when I should be writing and illustrating I’m often checking or writing email instead! I also do Tai Chi twice a week, it’s a great antidote to sitting in my studio.