We last spoke to Cecil Castellucci in January 2006 about the release of her second YA novel, The Queen of Cool (Candlewick, 2006). Read a Cynsations interview with Cecil.

Wow! This has been a huge year for you! Let’s start with the release of Beige (Candlewick, 2007). Could you tell us a little about the book?

It’s about a girl named Katy who goes to Los Angeles from Montreal to spend a couple of weeks with her punk rock dad, nicknamed “The Rat,” while her mom is on a dig in Peru.

The Rat is a punk rock drummer whose legendary band, Suck, never made it out of Los Angeles because of a drug problem. He’s clean and sober now, but music is his whole life. Katy hates music. She’s forced to hang out with her dad’s band-mate’s daughter Lake, who thinks Katy is the most boring person on earth. So she nicknames Katy “Beige.”

When I first moved to Los Angeles, I moved to this neighborhood that was a music neighborhood. I started working at Epitaph records. I ate at a restaurant where a member of the Circle Jerks worked. I wrote at a cafe that Eric Melvin from NoFX owned. I sat next to Tim Armstrong from Rancid at Thanksgiving dinner.

Everyone was so punk rock! I felt like I was pretty boring, bland and well…beige! I thought it might be interesting to tell a story from the point of view of someone who was totally outside of the scene and observing the scene. So a “normal” person would be the outsider in this alternative world.

Also, having been in a band, I really wanted to write a book about music. This was that book.

Interestingly enough, I think I’ll say that there was ten years. The first YA novel manuscript I ever wrote, called “Chloe’s Jam,” was a music novel about a girl who plays classical music and feels totally normal befriending a crazy punk rock girl with a brother in a band.

I really feel that Beige is a kind of reinterpretation of this very first idea for a YA novel that I had. Only I was at a much better place to write it now than I was then. I do credit that first, terrible never-to-be-seen novel, as really opening a lot of doors for me. And many of the same themes and ideas from that book are, at heart, in Beige.

The biggest challenge was that Katy/Beige hates music and I don’t. She’s also very with holding and repressed. I’m not like that either. So it was difficult for me to get into her head. She was a frustrating character. How can you not like music! Music is everywhere!

Another thing was that even though I have a very wide range of love for music, and I am an indie girl, I’m not the punkest person I know. So, it was fun to ask all my pals to give me their most essential punk songs. I even share some of them at http://isbeigepunk.blogspot.com

The point is that what is essential punk is different for everyone. And all of it is really terrific music. That’s something I love about that scene. You can’t define it so easily. And there is so much to it! 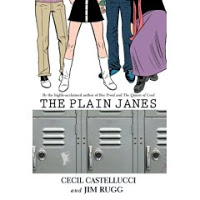 You also debuted a graphic novel this year with The Plain Janes, illustrated by Jim Rugg (Minx, 2007). What about the graphic format appeals to you?

I love that graphic novels go along at a quick clip. You have to be lean and mean when you are writing the text that will go in the balloons or captions because there is that extra added element of the image.

The image is really freeing, you can have this great tension between picture and text. Also it allows for a much more visceral reaction to the story.

In a prose novel, you often have to describe emotions, or how someone feels. With a graphic novel, one panel can tell you everything you need to know emotionally.

I also love the collaboration aspect of the medium. Working with Jim Rugg was fantastic. I really feel like we are a team and we both care about the story and have long discussions about the Janes. It’s been one of the most rewarding things I have done as an author. I’m so looking forward to the sequel, The Janes in Love. It comes out in 2008.

How would you describe the book?

It’s the story of a girl named Jane who is in a terrorist attack in the fictional Metro City. Her parents freak out and move her to the far out suburbs. At the scene of the attack, she saves a young man, a John Doe and finds a sketchbook with him that says “Art Saves.”

Jane takes this saying to heart. Eschewing her old self who tried so hard to fit in, at her new school she heads straight to the reject table in the lunchroom which is filled with three other extreme individual girls all named Jane, too. (Theater Jane, Brain Jane and Sporty Jane–guess which girl likes what!)

With them, she decides to form a guerilla art girl gang in order to try to make the mad world beautiful. Only the local authorities don’t agree that art is beauty. They see it as a threat. Also there is a mean girl and a cute boy!

Hopefully people who read the book will take a look around while on their daily constitutionals and see the little beauties of street art everywhere. ‘Cause it’s there if you look, and in my opinion, it does make the world beautiful. Art does save.

What advice do you have for budding graphic-novel writers–in terms of the craft and the business?

Well, I would read comic books and graphic novels. I would read scripts (for example, Sandman v. 3 has a script in the back).

I meet a lot of people think that it is easy to change a current WIP project that they have into a GN script. It’s not really true.

I mean, obviously you can, but you really want to take the best advantage of the medium. For example, it’s a visual medium. You have to really move the story along visually. You have to be brave enough to let go of the words and let the image do the talking.

Also, I would go to comic book conventions. If you are a writer-illustrator, make a mini-comic to show editors what you can do. That’s a great calling card.

Heck, if you are a writer, go to artists alley at the conventions and hook up with an artist to bring your mini-comic to life. Or, make a Web comic. That’s a great way to showcase your goods.

Also, once again, read comic books. I meet so many people who say they want to write a graphic novel, but they haven’t really read any. Read a lot of them! It’s just like writing for YA, you really have to read a lot them to get it! There are some amazing GN’s out there. Really amazing. Go to it! Have fun! It’s an incredible medium! And I can’t wait to read all of your books!

It’s been a couple of years since your debut prose YA novel Boy Proof (Candlewick, 2005) was released. How have you grown as a writer since then?

I think one thing is that now I think I can actually finish writing a novel. When I was first starting out, I didn’t believe that I would ever have it be done. Now I know how it works, and that there is a certain panicked process to it, but that I’ll actually get through the drafts and it will become a book. So I suppose that means I have a wee bit more confidence. (But just a wee bit!)

I am also trying to become more sophisticated in my knitting together of stories. I’m trying to flesh out more of the worlds and the characters.

I also think I use more words. I mean, Boy Proof is so lean and quick and you can eat that book in a hour! But Beige has so much more richness to it! It’s like a full-on lunch! Maybe one day I’ll hand in a 750-page book! A whole three-course meal! You never know! It could happen!

If you could go back in time to your beginning writer self and offer some advice, what would you tell you?

Read more. Learn more vocabulary words. Read more. Read even more. Relax. Show up to the page. Learn how to put better ears on so you can listen to critiques.

Don’t be so precious. Don’t be afraid to cut, cut, cut, ’cause you can always use all of that in another novel. And yes, you will have another idea for another book. Don’t worry.