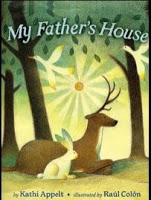 “Kathi Appelt was born on July 6, 1954, in Fayetteville, North Carolina. Her family only lived in North Carolina for a short time and then moved to El Paso, Texas; and finally to Houston.

“Most of Kathi’s books and poems come directly from her own life because that’s what she knows best and feels most strongly about.

“She currently lives with her family in College Station, Texas.

“Kathi used to think that a real writer had to have lots of exciting, maybe even dangerous, adventures in order to have something meaningful to write about. Now she knows that the best writing is about the people, places, pets, and objects that surround us and that we meet every day. She’s discovered that writing about them is the absolute best way to really know them and in the process to come to know ourselves a little better. She now knows that writing is really a way of seeing, and she’d like to encourage you to get out your old journal or start a new one and see what shows up.”

Your latest picture book, My Father’s House (Viking/Penguin, May 2007), is a beautiful poetic tribute to Earth and our environment, what was your inspiration for writing this book? And why now?

One day as I was driving, I had my radio on and was listening to a young minister talk about his love for the earth and bemoaning the fact that so many people who called themselves “spiritual” seemed to have such disregard for our planet. He was specifically referring to the notion that the Bible advocated mankind’s dominion over the Earth. He felt that was a misreading, and that the word “dominion” did not necessarily mean “use up” but rather “keep safe.”

His “safekeeping” message spoke to me in vibrant way, and so I’ve tried in this book to provide a celebration of our beautiful planet, and to subtly suggest that it’s our job to keep it and its inhabitants safe.

In your dedication, you thank Al Gore for his service and commitment on behalf of our beautiful blue planet; how has his work for the environment affected or inspired you?

I first read Al Gore’s book, The Earth in Balance: Ecology and the Human Spirit (Plume reprint, 1993), many years ago, and his message then was one that made sense to me. I was also inspired by his passion for this subject, especially since he relates to it in a deeply personal way. I felt he was speaking to me as one person to another, rather than to just another nameless face in the crowd. He makes me feel as though my small efforts can really help as far as being a good steward for the earth.

One of your recent picture books, Miss Lady Bird’s Wildflowers: How a First Lady Changed America, illustrated by Joy Fisher Hein (HarperCollins, 2005)(author-illustrator interview), also had themes about our natural environment and was quite popular, garnering much critical acclaim. What kind of feedback did you receive from teachers, readers, etc., and why do you think it was such a success?

First of all, I hope that the book reminded us of a very special woman, one who made a definite mark upon our national consciousness about the environment. Lady Bird Johnson was really the first national figure to bring the notion of conservation fully to our awareness.

The case can be made that Theodore Roosevelt also did this, but he is not quite so “unsung” as Mrs. Johnson. He gets a lot of credit—well-deserved—for really establishing our national park system.

But I felt that Mrs. Johnson deserved some recognition, even though she herself is very unassuming and not at all in need of that same recognition. I wanted to remind children, and their parents and teachers, that Mrs. Johnson is largely responsible for our beautiful roadsides, especially in the springtime when they’re covered with wildflowers.

I believe that the book has been well-received because not only is it a slice of American history that has gone unnoticed, but also because it’s a celebration of the work of one person who made a huge difference—and continues to make a difference.

Your children’s books span every age level, what are the challenges in writing for such a wide audience? How do you approach writing for young adults differently than for kids?

I don’t approach it too differently, honestly. In some ways, toddlers and teenagers have a lot in common. They’re both intense, both determined to do things their own ways and in their own time, both separating from their families and wandering out into the bigger world. Testing the waters so to speak.

Regardless of what age I’m writing for, I always try to write toward the hearts of my audience, to recognize the longings that we all feel at various times in our lives. I also enjoy the challenge of writing for the various age groups. While they all have similarities, they also have obvious differences. It’s a way of stretching myself as a writer to think about aiming a particular story toward a particular audience.

Your two sons are in college now, but while they were growing up, how did they inspire your work?

Well, I would never have written for children if I had not become a parent. Before my boys came along, I had no real awareness of children’s books to be honest. But once they were here, books saved us in so many ways. I was unprepared for parenthood, but I somehow knew that reading to my sons was a good thing to do. So that’s what I did. Thank goodness.

How has being a parent affected your writing? Do you have any advice for other parent-authors?

As far as being a writing parent, I would say first of all to savor the time you have with your children. They grow up so fast that it’s almost unbelievable. Don’t go along on any guilt trips about not writing enough when your kids are young. The writing will come, but your kids are going to vamoose before your very eyes.

And second, I would say to learn how to write in small snatches of time. If you look for that long thirty minutes all to yourself, you’ll never find it. Instead, honor those five minutes here and there. Have a notebook handy at all times. It’s pretty remarkable how much can be written in five minute increments. I still write in those small segments.

Tell us a little about your writing process and work environment; do you write every day?

Yep, I write every single day. That said, I don’t always write stories. I often spend my writing time answering correspondence, or filling up my journal, or just “playing” with an idea or what not. I wish I were more disciplined and could work on a schedule. I might get more done. But the way I write now seems to work for me.

And as for my work environment…I have a wonderful, small loft studio upstairs in my home. From my desk, I can look directly into the branches of a big oak tree, which is a home to numerous birds and squirrels and other small critters. When I look out at the tree, I feel almost like I’m in my own private tree room. I think it’s important for writers to have a space, even if it’s small, that is uniquely your own. Mine is a place I love to slip away to any time of the day. I have my own “stuff” there, and I work hard to keep it from being too cluttered. Clutter distracts me.

I confess that I take something of a slow approach to my work. I usually have to drink a cup of coffee, read the newspaper, check my e-mail, and work the NY Times crossword before I actually plunge into the work of the day. It’s my ritual if you will. I do my actual writing on a computer, a laptop, but I still keep a journal by hand. And I carry a small notebook in my purse, just in case a good idea pops into my head. There’s nothing more frustrating than to think up a good idea, or any idea for that matter, and be caught without paper or a pen!

You’ve taught writing at Texas A&M and Vermont College, and have conducted writing workshops for many years. How has teaching informed your own work?

I’ve always felt that the best way to learn something is to teach it, which is sort of cliché. But beyond that, I truly believe that it’s our stories that separate us from the rest of the animal kingdom. I’m fond of telling children that we humans are the “story animals.”

In so many ways, our stories are at the center of who we are, and in so many ways I believe that our stories can save us if we can learn to share them. It’s really no surprise that stories are at the root of both love and conflict. We go to war over whose story is “most true,” don’t we? And yet, the basic gathering of humans in a circle to share stories has the power and ability of exposing our basic humanity to each other. We all have more in common with each other, especially in matters of the heart—family, children, trees, cats—than we have differences.

So to me, teaching is all about being a catalyst for telling stories. If I can encourage others to share their stories in the best way they know how, then maybe I’m helping to make a difference in the world, even if it’s in a small way.

Do you read a lot of other picture books to keep up on what’s new and popular? If so, what are some of your favorite recent ones and why?

Yes, I try to keep up with current picture books. That said, without small children in the house, I read fewer of them than I used to. My current favorite right now is Alison McGhee‘s Someday (Atheneum, 2007), which is just heartful and lovely. I’m completely smitten with Alexander Stadler‘s “Beverly Billingsly” books. I also love Kimberly Willis Holt‘s whimsical Waiting for Gregory illustrated by Gabi Swiatkowska (Henry Holt, 2006)(author interview). And just about any book that features a cat is fine with me. I love Judith Schachner‘s “Skippyjon Jones” books–they just crack me up. She clearly knows cats.

My first novel will be out in the spring of 2008. It’s called The Underneath, and is set in the swampy forest of East Texas. I’m excited about it–the main hero is a cat named Puck. I’m still working on the final edits for this novel, but I’m also doing the research for my next novel, which will be set on Galveston Island, one of my favorite places in the world. My grandmother lived there and I have many happy memories of summers with her. I don’t know much about the story yet, but I’m eager to get it started.