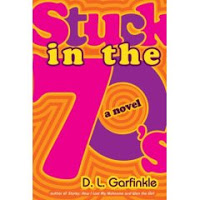 Your first book, Storky: How I Lost My Nickname and Won the Girl, (available in paperback from Puffin/Penguin, March 2007), received a lot of critical acclaim, with foreign rights sold in three other countries. What was that like, and did you feel pressure to follow it up with another success?

It felt wonderful. It took me a long time to get Storky published, so when my book was a success I felt not only proud but vindicated. As to pressure to follow up with another success, I’m a horrible worrywart so would feel pressure no matter what. But I have twelve more books coming out in the next few years, so I figure at least one of them should be a hit.

The author credit on your books is listed as D.L. Garfinkle. Is there a reason you’ve decided not to use your first name (Debra)?

I’m hoping the J.K. Rowling magic will wear off on me, ha ha. Really, just like Joanne Rowling, I chose to use my initials rather than my first name because I thought boys might be wary of picking up a novel if they knew a female wrote it.

What was your inspiration for your latest YA novel Stuck in the 70’s (Putnam, May 2007)? How did you come up with the idea?

I had just reread and enjoyed Freaky Friday, and decided to take a crack at writing a humorous magic realism book myself. I figured it would be funny if a very popular girl traveled back in time and had to rely on a nerdy boy’s help to get home. And then I thought she’d really be helpless if she suddenly found herself naked in his bathroom in the middle of the night, 28 years in the past.

Shortly after I wrote the first page, it was read aloud at a writing conference and got a lot of laughs. There’s nothing better than hearing people laugh at my writing— as long as the humor is intentional! So I kept going with the rest of the book.

This new book takes place in the 1970’s. How did you prepare to write it? Did you do any special research?

I thought it would be easy to set the book in the fall of 1978, since I was a high school sophomore back then and there’s so much to make fun of from that period, like disco, big perms, and polyester. But it turned out a lot harder than I thought. I researched fashion, prices, music, movies, and news events from that time period. What really killed me is that since time travel is involved, I had to research physics. That stuff was murder on my brain!

Tell us about how you developed your lead characters, Tyler and Shay, for Stuck in the 70’s. And in particular, how are you able to write so well in the voice of a teenage boy (in this book, as well as for your first novel, Storky: How I Lost My Nickname and Won the Girl)?

I admit I was pretty wild in high school, so Shay wasn’t too hard to write. As to my teenage male characters, I was also a bit of a tomboy and had a lot of male friends in high school, as well as two brothers. Also, there were two male writers in my critique group, and my editor at Putnam is male. So they helped me a lot. One of the best compliments I ever received was reading a blog of a teenage boy who read Storky and thought that a real teenage boy had published his diary. I’ve also received great emails from teenage boys who’ve said that Storky is just like them.

Tyler and Shay essentially represent opposite groups in school: the nerds and the popular crowd. Did you intentionally set up this polarity for the story? In which group did you fall when you were a teen, and what were you like?

I intentionally set this up. There’s more potential for conflict when the characters are from different social worlds besides different eras.

As a teen, I flitted between different groups. I sometimes hung with the nerd crowd. I used to love to play backgammon, and have always had a thing for nerdy guys. I also was in the drama club, hanging out sometimes with Kevin Spacey and Val Kilmer, who were a few years ahead of me at my high school. And I was a yell leader, so I knew the cheerleaders and football players. Also, I was senior class vice president, so I was in the student government crowd. I was busy in high school and really loved it. Middle school, however: Ick.

In addition to Stuck in the 70’s, you also have the first book coming out in your new YA series The Band (Berkley, May 2007). Tell us a little about that series.

It’s been really fun to write The Band series. The Band is about the rising careers and rocky romances of five teens in a rock band. The books are full of music, humor, drama, romance, fights, and juicy makeout scenes. Three books in that series are coming out this year. I’m tired!

Do you read a lot of other YA novels to keep up on what’s new and popular? If so, what are some of your favorite recent ones and why?

I started to read YA novels to keep up with the competition, but now I read them because I love them. Novels for teens are often like adult novels, except without the boring descriptions I used to skip over anyway. Some of my recent favorites are Dairy Queen by Catherine Gilbert Murdock (Houghton Mifflin, 2006), A Room on Lorelei Street by Mary E. Pearson (Henry Holt, 2005)(author interview), and Unexpected Development by Marlene Perez (Roaring Brook, 2004)(author interview). All three books are character-driven yet fast-paced, and the characters in them have unique voices.

Your writing style is very relatable and will no doubt inspire many of your readers to start writing themselves. Do you have any advice for teens who want to become writers?

Thank you. I think the best things I did as a teen were to read a lot, keep up a journal and do creative writing, and perform in plays. I did these just for fun, but they ended up really helping later on. Reading gives writers an innate sense of how to structure a book. The best way to get better at writing is to write a lot, and acting is a great way to learn character development.

I’ll be doing something really different for me. I’m writing a series of humorous books for children called The Supernatural Rubber Chicken. It’s about an ugly, cranky rubber chicken that can grant superpowers. The first four books in that series come out next year. I’m also working on another humorous novel for teens. Just the title alone made my agent laugh, so that’s a good sign.