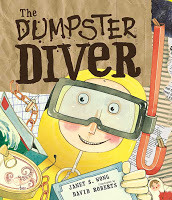 Janet S. Wong is the author of eighteen books, including three titles published this year: Before It Wriggles Away, part of the Meet the Author Series (Richard C. Owen, 2007), Twist: Yoga Poems, illustrated by Julie Paschkis (Margaret K. McElderry, 2007)(excerpt), and The Dumpster Diver, illustrated by David Roberts (Candlewick, 2007).

I am a West-coast woman living near Princeton, NJ (a trailing spouse)

I was in a tiny children’s bookstore looking for a gift for my young cousin. I had an armload of picture books, books that I wanted to buy for myself because I loved them so much. That’s when the idea hit me: people wrote these books. Why couldn’t I be one of them? What a different life that would be!

I was a lawyer then. I was making a ton of money, and I love spending money–but I was so miserable that the money wasn’t worth it. I wanted to do something important with my life, and I couldn’t think of anything more important than working with kids. I knew I couldn’t be a teacher; I had tried substitute teaching in a local elementary school while I was a student at Yale Law School, and it was the hardest job I’ve ever had! I decided that writing books for kids would be fun and would also give me the feeling that I was helping to make a better world.

Congratulations on the publication of The Dumpster Diver, illustrated by David Roberts (Candlewick, March 2007)(inside spread)! What was your initial inspiration for writing this book?

I was at an arts fair and saw a chair made from old wooden skis. I asked the artist, Kerry Wade, what gave him the idea to use skis. He said, “Oh, I’m just a Dumpster Diver!” About a third of the way through The Dumpster Diver, I made Steve and the kids build something out of old wooden skis. In the original draft, they transformed the skis into a chair (imitating real life), but my very keen editor Kara LaReau (also an author) suggested that I make the creation something a little more unusual. Several drafts later the skis became a “Paraskater!” (which kids love).

What did David Roberts’ art bring to your text?

I bow down to David for being a genius-inventor. For instance, look at what he created with nothing more than these words: “And an old table plus two banged-up skateboards plus a ripped crib mattress plus a hand-held shower plus thirty-two screws and a roll of duct tape can become…anything we want it to be.”

One thing I kept waffling over was whether to have Steve the Dumpster Diver get hurt. I didn’t want this book to be heavy-handed and preachy. Didacticism: the kiss of death in reviews! I didn’t want my book to discourage “respectable people” from Dumpster diving. I wanted this book to be a call-to-action to all of us to stop wasting so much stuff, and an inspiration to make new things from junk.

But I also didn’t want thousands of kids to start crawling into Dumpsters. Their parents would hate me. And how would I feel if some kids got hurt or sick? My solution was to have Steve get cut on broken glass and rusted metal when the Dumpster trash collapsed under him–and to have this inspire the kids to start collecting their Useful Junk in a different way. Kind of corny, I know, but as I said, I am first-most a mom–and I want my readers to stay out of trouble!

Are you doing any special promotions in conjunction with the release?

All for Kids Books in Seattle is working with me on The Dumpster Diver’s Junk Is Good contest. Kids and adults can enter by building something or imagining something built from junk, and there are categories for individual entries, team entries, and classroom entries. We’ve received some pretty neat feedback. Apparently there are a lot of people out there with a whole lot of junk in their closets, basements, attics, and garages!

You’re one of children’s literature’s most distinguished poets! How would you describe the current state of the children’s poetry market? What changes have you seen over the course of your career? What do you anticipate for the future?

But things quickly became different, soon after I started. It became apparent (at least to me) that collections must have a theme, in order to sell. I’ve written themed-collections on mothers, driving, dreams, superstitions, and yoga. But I have a ton of poems that would be hard to fit into a themed book–and so, for now, those poems sit in my computer or on little scraps of paper scattered throughout the house.

Getting published is like winning the lottery; you can’t win if you don’t play. Write like crazy, snatching little bits of time and capturing ideas before they disappear. In Before It Wriggles Away, my Meet the Author book, photographer Anne Lindsay shows me writing at the dentist’s office, writing in the car, writing at my son’s fencing practice, writing late at night, writing at the lake–writing everywhere and anywhere, even if just for five minutes at a time. If you wait until you have a whole free day to start writing your story, you might never write it!

Once you’ve written a shoebox full of stories, send your best stuff out. If your books come back with rejection letters, send them out again. Rejection is part of the process.

In the meantime, while your stories are out circulating, revisit them with a critical eye. Write different drafts. Don’t try for better writing, just different writing. Experiment. See what you can do. If you were a basketball player, would you practice only lay-ups? No: you would challenge yourself, you would take risks in practice. Take risks with your writing. And have fun!