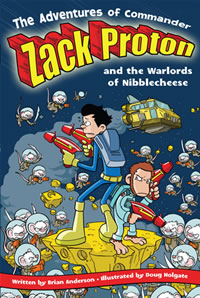 “The biggest challenge was reformatting the story from a traditional chapter book into the wacky format it ended up in. My editor told me I had to cut the word count from 7000 words to 4000, but the story was pretty lean to begin with and there just wasn’t a lot of room for cuts.”

“I enjoy doing these small books. I have a reductionist mind. Whatever I’m dealing with, I tend to take to its simplest, most succinct form. In some situations that isn’t necessarily good. But if you need to take a body of complex information and present it to the very young, it is an essential skill.”

“Growing up in the ‘Judy Blume’ era of children’s literature, I remember it really bothered me as a kid to read about situations in which there wasn’t an adult around, noticing at least out of the corner of their eye what was going on. It didn’t seem realistic. So I try to suggest that there are grown-ups out there who can help even when it doesn’t seem like it.”

“I was really intrigued with the idea of appearances, and the assumptions we make based on them. When I was in high school, I was always really envious of those girls who seemed to have everything: the perfect hair, perfect clothes, perfect boyfriend, perfect life. It wasn’t until I was older that I realized that nobody’s life is perfect, and that those girls probably had a lot of the same problems I did.”

“When I received Mary’s first sketches, I couldn’t stop smiling. Her Estelle wasn’t at all the way I’d pictured her; I immediately liked hers better.”

“All seven books in the series are published by Writers Exchange E-Publishing using the FlipBook system. This means that each one looks like a book, and kids can hear the pages as they ‘flip’ over–totally cool!”

—Margot Finke, the author of a series of educational e-books about U.S. and Aussie animals

“Well, I don’t know anything about what it’s like to be a child prodigy, since I wasn’t all that smart and wasn’t a very good student, either. So I did have to read a lot of books about child prodigies. Also, there is some math in the book (note: you don’t have to like math to like ‘Katherines’), and I am really bad at math, so that was tremendously difficult. Also, Colin speaks 11 languages, and I speak one, so that was time-consuming.”

—John Green, author of An Abundance of Katherines (Dutton, 2006)

“Actually, the novel is based on a true story. Late one night, some friends sat around swapping stories about adolescence, and someone began telling a wild tale about living in a funeral home the night his grandfather died.”

“My father was interned in that camp. The other reason has to do with my belief that it is not just the sharing of values but the sharing of this amazing land that makes us Americans. So I wanted to write about how two groups of people sharing a land can change the world.”

“A lot of my books deal with Chinese culture because, in a way, I’m trying to find the culture I lost. When I was younger, I was ashamed or sometimes even angry about being Chinese. Most of the time I forgot that I was Chinese. Sometimes I would see myself in the mirror and be surprised to see a Chinese girl looking back at me.”

“Certainly they [vampires] are frightening and deadly, but the are also alluring. They have attributes we envy, such as eternal youth. They are often attractive, rich, powerful, and educated. They sometimes wear tuxes and live in castles. The paradox there makes them hard to resist, at least as subjects for stories.”

“This is a 120-something-page book that began as a picture-book proposal, which says how drastically it’s evolved. My editor drove the project from the beginning. She was enthusiastic about the photos and, as I fed her sections of text, encouraged me to dig deeper and let it grow.”

—Deborah Noyes, author of One Kingdom: Our Lives With Animals (Houghton Mifflin, 2006)

“Now that our two sons are grown, I realized that my most cherished memories as a mom revolved around that bedtime routine when the boys were very small. I wanted to write a story that would capture both the warm, loving moments and the silly, funny things we shared together night after night.”

“I can still remember the jaw-dropping sight when he opened the door: the entire room was filled with giant rainbow-colored pyramids. They were suspended from the lights and lined up along the windowsills and bookshelves. It was a magical, almost gravity-defying sight.”

—Shelley Pearsall, author of All of the Above (Little Brown, 2006)

“Most of my inspiration now comes from my own writing. There might be a secondary character or theme in a novel that I want to explore further. Most of my novels are in some fashion linked to each other.”

“Ela was chosen to play the role of the Cat in the children’s opera ‘Brundibar’ that was performed at Terezin 55 times. To this day whenever it’s performed anywhere in the world she’s invited to attend and sing the final Victory March with the children who perform.”

—Susan Goldman Rubin, co-author of The Cat With The Yellow Star: Coming of Age in Terezin, also by Ela Weissberger (Holiday House, 2006)

“There was so much I wanted to ask my mom–more than ever before. So the immediate inspiration for Dream Journal was becoming a mother and finding that I needed to talk to a mother (albeit a fictional one) in the most profound way possible. The more long-term inspiration was, of course, my old friend and enemy, Loss. Ultimately I just wanted to write the book I wished I could have read when I was a teen, and that I still needed to read as an adult.”

“The idea behind the story is Cyrano-inspired. We knew we wanted one character helping another to spark a romance, only to get sucked further into it than he originally intended. Then there was the gay-straight twist layered onto that. Then there was the idea that two characters (and two authors) should tell the story.”

“I’ve always loved fantasy novels, but my favorites have been the ones where the hero leaves this world for another. It’s not only the discovery, it’s also the fact that when you first enter a new world (or school or city), nobody knows who you are yet, and you can break out of any mold in which people have placed you in the past. No longer are you Megan, the plain tomboy. Now, you’re a sword-wielding heroine!”

—Jo Whittemore, author of Escape from Arylon (Book One from the Silverskin Legacy)(Llewellyn/Flux, 2006)

“My grandmother told me a story about the Bardin Booger when I was little. This is my hometown’s version of the Bigfoot legend, and I’ve heard about sightings since then in the marshy forests that separate the small towns and cities of North Florida.”

—Roxyanne Young, co-author of Tales of the Cryptids: Mysterious Creatures That May Or May Not Exist, also by Kelly Milner Halls (author interview) and illustrator Rick Spears (Darby Creek, 2006).

“I have file drawers full of stuff I’ve written that will forever languish in a dusty dark purgatory. It’s frustrating, but I have to keep in mind that not everything I create will have a published future. Sometimes we write just to flex our mental muscles and shape our individual style.”

Thanks to all of those above for sharing their thoughts!