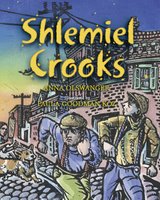 Anna Olswanger wears a number of hats in the book world. In addition to being a literary agent with Liza Dawson Associates in Manhattan, she is the author of Shlemiel Crooks, illustrated by Paula Goodman Koz (Junebug, 2005), a 2006 Sydney Taylor Honor Book and a 2005-2006 Koret International Jewish Book Award Finalist, and is the coordinator of the Jewish Children’s Book Writers’ Conference each fall at the 92nd Street Y in New York. A frequent traveler on Amtrak, she teaches business writing at the Center for Training and Education at Johns Hopkins University in Baltimore, and writing for physicians at Stony Brook University School of Medicine and Hospital. Anna lives in Fair Lawn, New Jersey. Her website is www.olswanger.com. See also: Agent Interview: Anna Olswanger from Cynsations.

I wanted to be a writer when I was a teenager, but by the time I graduated high school, I was burned out on literature because of the tediousness of analyzing and writing research papers. I thought the solution was to create in a nonverbal way (a way that no English teacher could judge), and for me, that meant art, so I started college as an art major.

That was in the early 1970s, and the college I went to had made sweeping changes in its graduation requirements as a result of the student unrest of the 1960s. In essence, we had no graduation requirements, just 120 credits of anything we wanted to take in broad areas like humanities, fine arts, science. That meant I could jump into oil painting without taking drawing.

By the time I graduated college, I was a frustrated artist. I didn’t have the basic drawing skills to paint what I wanted, nor did I have the self-discipline to take basic drawing courses.

So, I gave up painting and turned back to writing as an expression of my creativity. I focused on playwriting (I still didn’t want to study literature) and started an MFA program in playwriting at Southern Illinois University at Carbondale.

I didn’t like the rigidity of the playwriting graduate program I was in. So, I dropped out and went to London where I hoped to find actors to write for. I started a Jewish theater with some newfound friends there, but we never got backing and I couldn’t make enough money in London to stay longer than six months.

But while I was there, my friends took me to a large bookstore in one of the university towns (this was before the days of Barnes & Noble). For the first time as an adult, I wandered into the children’s books section of a bookstore. I picked up a few picture books and realized that they were little theaters between covers: they had dialogue, costumes, sets, lighting, and stage directions. I decided at that moment to write children’s books instead of plays.

Congratulations on Shlemiel Crooks, illustrated by Paula Goodman Koz (Junebug, 2005), a 2006 Sydney Taylor Honor Book and a 2005-2006 Koret International Jewish Book Award Finalist. What was your initial inspiration for writing this book?

My father died in 1981. He had been a wonderful storyteller, and I wanted to recapture his stories about his parents, his aunts and uncles, and his brothers and sisters. So, I began genealogy research.

My father’s family had emigrated from Lithuania to St. Louis in the 1880s and 1890s, and I made a series of research trips to St. Louis from Memphis, where I was living, to discover what I could about my St. Louis ancestors.

I worked on the story for several years. I began it in the 1980s when I was in the midst of my genealogy research, and it wasn’t published until 2005. I thought by then I had revised it to perfection, but the editor at NewSouth suggested a few changes, which I made.

I was lucky to have a born and bred Southerner as my editor. He could feel the rhythm of the story, even though the Yiddish-inflected English of Shlemiel Crooks wasn’t something he was familiar with. Before publication as a book, Shlemiel Crooks appeared in The Young Judaean magazine where it won a Society of Children’s Book Writers & Illustrators Magazine Merit Award in 1999. I also self-published it as a miniature book for collectors in 2003.

Like most writers, I had to learn to persist. Shlemiel Crooks garnered 100 rejections. That’s why I self-published it in 1999. I feel strongly that writers should find pleasure in their work.

As a literary agent, I hear from writers who have become angry—whether at agents or editors or the world—about not being published, but editors and publishers don’t owe writers anything. We writers owe it to ourselves to create our own joy. That’s why I self-published Shlemiel Crooks. It gives me joy to share my work, period. I didn’t need a book contract for that.

What advice do you have for picture book authors building a career?

I’m answering this as a literary agent. Be patient because it can take years to build a career as an author. I don’t think the market can bear more than one book a year from an author, so prolific picture book authors might want to work in longer forms, in addition to picture books. Most important, find a way to experience happiness in your life that has nothing to do with being published.

Chicken Bone Man, a story set in the 1920s in Memphis, about my father. He was a Jewish kid enamored of the blues. His dog Jerry, who narrates the story, saved my father from a life on the concert stage accompanying his sister (my aunt) in opera.