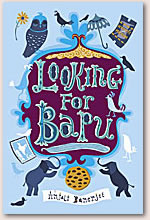 Anjali Banerjee on Anjali Banerjee: “I was born many moons ago in Calcutta, India. (The city recently cast off its colonial moniker and changed its name to ‘Kolkata.’) We immigrated to Canada when I was two months old. My father had placed first in India on the Cambridge Exams and had scholarships to study at several universities in England and North America. He chose the University of Waterloo in Ontario. We settled in a small Manitoba town and later moved to Santa Barbara, California. I guess I must’ve had a strong Canadian accent. The kids in California kept asking me to say ‘out,’ ‘about’ and ‘eh?’

“I graduated from the University of California, Berkeley, and now live in the Pacific Northwest with my husband, three crazy cats, and a black rabbit named Friday.

I’d like to focus on your new release. But could you first tell us a bit about your debut children’s book, Maya Running (Wendy Lamb/Random House, 2005), which is now available in paperback (August 2006)?

Maya Mukherjee, the only brown-skinned girl in her tiny Canadian town, feels neither Indian enough for Indians nor Canadian enough for Canadians. She’s ‘Maya in the middle,’ caught between cultures. She asks a golden statue of the Hindu elephant god, Ganesh, to grant her wish for a perfect life. He complies, but not in the way she expects.

Congratulations on Looking for Bapu (Wendy Lamb/Random House, 2006)! What was your initial inspiration for writing this book?

My grandfather had recently passed away, and a very close friend, also an author, had died suddenly of a massive stroke. I think that subconsciously, I needed to write about grief, but also about hope and devotion. I had to keep an element of humor–it’s a natural part of my writing voice. I also wanted to move away from the issue of cultural angst. It’s still there in Looking for Bapu, but not as a central theme. Cultural angst can be specific, but grief is universal. We all experience the loss of a loved one at one time or another. That kind of sadness crosses all cultures and generations.

I also wanted to portray the experience of a person of color immediately post-9/11 without hitting the reader over the head. I chose (I hope) a subtle approach.

Okay, that’s the intelligent answer. The real answer is, Looking for Bapu popped out of nowhere. The creative process is truly mysterious.

Funny–I was thrilled to have a two-book contract with Wendy Lamb Books (Wendy Lamb is a WONDERFUL editor), but when I sat down to write the second novel, I froze. What if I couldn’t write another book? What if I had only one story inside me? What if the next book turned out to be garbage?

I had completed Maya Running in late 2003 (for publication in early 2005), and by August 2004, I managed to produce a strange young adult novel, Saving Rakshi, that featured a small demon trying to escape from an ancient bottle. Maybe the demon represented my fears, or my muse! Who knows?

I didn’t like the manuscript. I knew, on some deep level, that the book was not authentic. I know that’s a weird thing to say, as fiction is by definition “literature…describing imaginary events and people.” But I feel that every piece of good fiction has an essential truth, and Saving Rakshi didn’t have it.

My editor was very kind. In November 2004, she gave me a revision letter for Saving Rakshi, but I asked her if I could trash the manuscript and write a new story. She allowed me to do this (I am forever grateful!).

Looking for Bapu flowed out in about three months, but I revised quite a lot with guidance from Wendy Lamb and her brilliant assistant, Ruth Homberg.

In the first draft, Anu goes to India to meet a sadhu, a Hindu holy man. But Wendy suggested that we set the story entirely in America, so I rewrote the middle section of the book. Now Anu’s great aunt visits from India, and brings a video of a sadhu. I completed the manuscript in late 2005.

You also write for adults, and your titles include Imaginary Men (Downtown Press, 2005), which I thoroughly enjoyed, and Invisible Lives (Downtown Press, 2006), which I look forward to reading. How is it different, writing for young people versus adults? What are the special challenges of each?

I enjoy writing for both audiences. In many ways, the challenges are the same. No matter who your audience is, you still have to produce a good story, develop strong characterization, conflict, and a satisfying resolution.

But sometimes I have trouble keeping the genres separate! In the first draft of Invisible Lives, the protagonist came across as too young, perhaps in her teens. I had to make her more mature. In a scene I wrote for my current work-in-progress (for adults), a kindergarten teacher helps a boy who has just pooped his pants. Children might find the scene hilarious, but my adult critiquers were not amused. They found the scene too “earthy” and suggested that I delete the poopy pants (boo hoo).

I love to read, jog, do yoga, hike, hang out with our cats and rabbit, and go to movies and plays. I also enjoy watching the wildlife visit the feeders in our garden (I have several bird books and a heavy pair of Audubon Society binoculars).

An Interview with Wendy Lamb by Barbara J. Odanaka at skateboardmom.com.