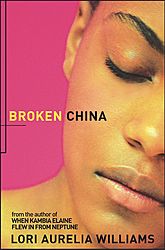 From Simon & Schuster: “Lori Aurelia Williams holds a master’s degree in English from the University of Texas at Austin, where she was awarded both a James A. Michener Fellowship and a scholarship in creative writing. Her fiction is set primarily in urban areas and combines African-American storytelling with street slang. Born in Houston, Lori Aurelia Williams now lives in Austin, Texas.” Read a previous Cynsations interview with Lori.

Shayla’s Double Brown Baby Blues continues the story of Shayla and Kambia. It takes place about a year after the first book. The book is all about dealing. Kambia is trying to deal with demons from her past and Shayla is trying to deal with the negative feeling she has for her deadbeat father and his new baby girl. You also meet a new character, Lemm. Lemm is a thirteen-year-old alcoholic dealing with a tragic incident that took his younger siblings’ lives. The book is about these three young people working through some very complicated problems.

What made you decide to write a companion to Kambia Elaine Flew In From Neptune?

I wrote the book simply because I felt like there was more story to tell. Readers wanted to know what would happen next with Kambia and Shayla, and so did I. I wanted to see if Kambia would ever get a normal fairy tale life, and if Shayla would ever get the father that she deserved. Of course, the only way to answer these questions was to write the book.

What are the special challenges in writing companion books?

I think the challenge is making the book stand on its on, but still be a part of the original work. I think I achieved that. With Shayla and Lemm, I wrote two independent stories that could reel the reader in without having read the previous book. And Kambia’s story is also unique, since she dealing with a new problem we haven’t encountered before. When you put all three stories together, you have a book that is connected to Kambia Elaine, but very different.

Congratulations on the release of Broken China (Simon & Schuster, 2005)(excerpt)! What was your initial inspiration for this story?

When I was a little girl growing up, I knew girls that would do all sorts of things to get money, including exploiting their bodies. These were poor girls who just wanted what every girl wants, food on the table, some of the latest clothing, and a place to hang that clothing up in. In order to get these things, they would often allow themselves to get pulled into bad situations. Out of that memory I came up with Broken China, a fractured fourteen-year old girl who wants to do one thing, get something special for her child. In order to do that, China takes a job at strip club, where she finds out life can be very scary and harsh in the adult world.

The biggest challenge with bringing China to life was making her seem real. China is a very mature young lady. The challenge is making people understand that there are lots of Chinas in the world, girls who don’t get to be children because of the horrible situations in their lives. In order to do that, I started the book with China, the mother, hanging out with a much older friend and her children. I then switched to China the girl, hanging out with her best friend at school. I wanted the readers to immediately see her in both roles, so they would understand that was already living as a woman, but still very much a child.

We recently spoke together on a panel at the ALA JCLC in Dallas, and I was struck by your passion for giving voice to teens–like young teen mothers–who might otherwise go unheard. Could you tell about your connection to these teens and their place in your body of work?

I grew up in an area where teen mothers were as common as rain. It seems like there were teen mothers in every other house on the street. One of my best friends got pregnant right out of on elementary school, before any of us truly understood what sex was. We messed around without understanding that messing around could lead to a swollen belly and relocation to a special school. I remembered how confused and sad my friend looked, standing in the doorway watching the rest of us girls jumping rope in the street. When I write I try to express the feelings and emotions that she felt standing alone in her house, realizing that without meaning to she had given her childhood away.

You’ve written about difficult, sometimes controversial subjects that may make some grown-ups uncomfortable. Do you ever feel pressured to self-censor or have you faced censorship from outside forces? What keeps you on track in a political climate that sometimes tries to squelch artistic speech, especially that directed at young readers?

I have definitely been censored, but no matter what I will continue to write what I write. I deal with difficult subjects because I know that there are children who are struggling with difficult lives. I’ve met victims of sexual, physical, and substance abuse, children who have been locked up for robbery or assault, and children who were just unfortunate enough to make a bad decision about sex. I’ve met them, and I was one of them. When I write I write for and about those children. I know that this sometimes makes adults uncomfortable, but we often live in an uncomfortable world.

It’s been six years since your last interview for Cynsations. How have you grown and changed as a writer since that time?

I think I’ve gotten more disciplined. It doesn’t matter how much I have going on in my life I make certain that I get the writing done. Sometimes I’m writing late at night when I can barely keep my eyes open, but I’m driven to keep the text flowing and get the story told. I think that kind of commitment only comes with growth.

What advice do you have for beginning YA novelists?

My advice to all writers is the same, there’s nothing to it, but to do it! Get into your characters heads and get the story out. Don’t over think the plot, just keep writing until you have a finished piece of work. There is always time to fine tune your writing later, and your agent or editor can decide how the book should be sold. YA writing is the same as adult fiction writing. All you have to do is know your characters and know the situations you want to put them in. I’ve probably said this before, but if you can remember where you want Sally to go, and how she will feel when she gets there, you already have all you need to write a book.

I recently took a job at a publishing company called Badgerdog, which runs creative writing classes in several local area schools. I am the program coordinator for that program. I’m super busy, but I love visiting the schools and helping make certain things run smoothly. When I’m not doing that I’m trying to whip something up on the sewing machine or watching my favorite episode of “Project Runway.”

Next is a book currently titled Hiding Demonee. I never tell the plot of a book before it’s released, but it’s about a seventeen year-old girl who makes a big mistake with the love of her life. The book is about the growth that comes from the consequences of that mistake.