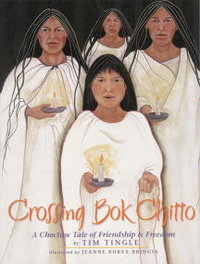 The Writers’ League of Texas has announced its Teddy (Children’s Book) Award winners.

In the short works (picture book) division, the finalists are The Pledge of Allegiance by Barbara Clack (Texas A & M University Press Consortium, 2005) and Mocking Birdies by Annette Simon (Simply Read Books, 2005).

In the long works (middle grade/YA) division, the finalists are Tofu and T. rex by Greg Leitich Smith (Little Brown, 2005)(author interview) and Czar of Alaska: The Cross of Charlemagne by Richard Trout (Pelican, 2005).

Honorees will be featured at the Texas Book Festival in a special discussion panel and signing on Oct. 28 at the Texas Capitol building. A reception with hors d’oeuvres and cash bar will follow at the Brown Bar at 201 W. 8th Street (Colorado is the cross street) from 5 p.m. to 7 p.m.

This is the Eleventh Annual Teddy Children’s Book Awards. The awards were established to honor outstanding published books written by Writers’ League of Texas members. Learn more about the awards. Learn more about Texas children’s/ya authors and illustrators.

The amazing Lisa Yee reports on the Joint Conference of Librarians of Color in Dallas. See my report and Greg Leitich Smith‘s.

Patti, a teen services librarian from Austin is the latest of the bloggers to chime in on my upcoming gothic fantasy YA, Tantalize (Candlewick, February 2007). She writes: “There is murder, love gone awry, distrust and suspicion, menacing foes, were-people and vampires, and more murder. This is a fun read and one that you probably will want to read from cover to cover because it is just that enjoyable and easy to read.” As a writer who loved her setting, I’m especially thrilled that Patti enjoyed the Austin references integrated into the story. Read the whole post!

Be Water, My Friend by Ken Mochizuki, illustrated by Dom Lee (Lee & Low, 2006): a recommendation by Chris Barton of Bartography. Chris is the author of The Day-Glo Brothers (Charlesbridge, 2008). Fans of picture book biographies also should visit Anneographies.