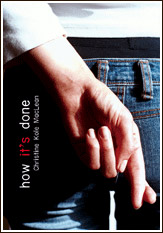 Christine Kole MacLean on Christine Kole MacLean: “The high points, such as they are: I grew up on a farm in West Michigan, where I spent a lot of time avoiding chores. My five older siblings all thought I was spoiled, but I was just good at disappearing for long stretches of time. My first week of college, my roommate and I wanted to build a loft, so we went looking for a power drill. I ended up marrying the guy who loaned us one (years later–not that night!).

“After college, I wrote and edited for magazines in the Boston area, including ‘Teenage’ magazine, which eventually morphed into ‘Jane’ and moved to New York. I did not. I spent some time working at an advertising agency and then a corporation. Now, my family and I live in West Michigan, where I do freelance writing.

I’ve known since I was about nine that I wanted to be a writer. I believe it had something to do with being the youngest of a large, busy family and rarely feeling “heard,” and writing fills the need to be heard. At any rate, once I decided to be a writer, I never looked back. Oddly, I’ve never felt compelled to write, the way some writers do. Maybe that’s because I’ve never not written. To me, writing is like breathing. I have always done it, in some form or another.

In all honesty, I could have written How It’s Done (my first YA book) as an adult book, and I think the only thing that skews it YA is that it’s very firmly from an eighteen-year-old’s point of view. I skewed it that way because I believe it’s more likely to make a difference in a reader’s life if she reads it before she’s in a serous relationship. Personally, I think it could be a great discussion starter for mothers and daughters.

Congratulations on How It’s Done (Flux, 2006) being a Book Sense Pick! What was your initial inspiration for writing this book?

Thanks! In high school, almost all of us in my group of friends dated guys who were older–sometimes a lot older. They held enormous appeal to us, in part because they were forbidden. Usually the guy got bored and broke things off. But the opposite happens to Grace, my main character. She gets everything she thinks she wants with Michael, and more than she bargained for. She struggles with who she is–apart from her parents, her friends, and Michael.

This is the question that intrigued me: “How does a young woman who is in the process of ‘becoming’ navigate a relationship with someone who already knows who he is and what he wants?”

Grace was a little problematic. Sassy or clever characters are easier for me to write, I think, because they are so different from me. Grace has a lot going on, but initially it’s under the surface. She’s been letting life carry her along, not rocking the boat, and I wanted her to be stronger. But it’s a strength she has to grow into.

Make sure you have at least two true-blue friends–one who is a writer and one who is not. Both will keep you sane and grounded, but in different ways.

When I’m not writing books, I’m often doing projects for my corporate clients, including www.jugglezine.com, an e-zine about balancing work and life. I spend a lot of time with my kids.

And I worry, always imagining and dreading the worst! I’ve decided that worrying is to a writer what scales are to a musician.

The third book in the Mary Margaret series, Mary Margaret Meets Her Match will be released in February 2007. This time, Mary Margaret goes to a dude ranch and learns how to ride. Her confidence exceeds her skill, however, and she gets into a bind. As usual, her problems aren’t big in the scheme of things (she has a family that is in tact and loves her), but they are still huge to her.