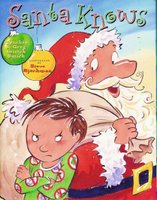 Alfie F. Snorklepuss doesn’t believe in Santa Claus, and he’s being a real pest about it. He thinks he’s proven that Santa doesn’t exist because there’s no way that Santa could do all the things he’s supposed to, like deliver billions of presents all over the world in one night or know what every little kid wants. And cranky Alfie is everywhere–on TV and radio, in the newspapers–telling boys and girls what he thinks is the truth.

Then, one Christmas Eve, the man in red himself packs up Alfie and brings him to the North Pole for an attitude adjustment, Santa-style….

In this sweet and funny picture book, Santa Knows reminds readers about the importance of being nice, not just at Christmas, but all year round.

Cynthia Leitich Smith was born in a snowstorm on New Year’s Eve in Kansas City, Missouri. After college, she went on to study law at the University of Michigan and in Paris. Today, Cynthia writes books for young readers, runs a large children’s literature Web site, and makes her home in sunny Austin, Texas, with her husband and coauthor, Greg.

Greg Leitich Smith was born in Evanston, Illinois, and raised in Chicago. After college and graduate school, he went on to the University of Michigan Law School. Today, Greg practices parent law, writes for kids, and lives in Austin with his wife and coauthor, Cynthia.

Steve Björkman has been drawing ever since he can remember—at home, in church, during class, and in most of his spare time. Over the past 25 years, he has illustrated over 70 children’s books, hundreds of greeting cards, thousands of advertising and editorial illustrations, and art on a variety of products from paper goods to picture frames. Steve lives in Irvine, California, with his wife and three kids.