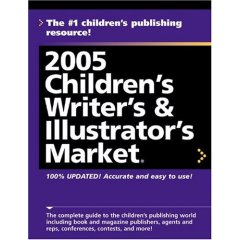 2007 Children’s Writer’s & Illustrator’s Market edited by Alice Pope (Writer’s Digest Books, 2006). “If you long to see your stories or artwork in the hands of young readers, this is the book you’ll want to use.”

About ten years ago, I quit my government law day job. My goal was to write full-time for children and teenagers, even though I didn’t have so much as a rough draft to my name.

I walked from my apartment in Chicago to the Border’s at Michigan Avenue and Pearson, asked a bookseller where the writers resource section was, and soon afterward, began pulling anything that looked useful from the shelves.

I remember hesitating to buy the newly minted edition of the Children’s Writer’s & Illustrator’s Market. After all, I had no manuscript to shop. But it occured to me that the learning curve of the publishing industry was likely as steep as my writing one.

Especially since both are moving targets, that proved to be true.

Back in my postage-stamp-sized apartment, I poured over the articles and took my pink highlighter to the publisher listings.

It was a thrill to have my editor-author exchange with Rosemary Brosnan about Indian Shoes (HarperCollins, 2002) featured by Esther Hershenhorn (author interview) in “Dear Writer: When Editorial Letters Invite Revision” in the 2003 edition of the CWIM.

All of which is to say, I have a particular affection for the CWIM, but the 2007 edition is the best I’ve ever seen. Articles of note include a new one by Esther, “A Writing Teacher’s Do’s and Don’ts” as well as: “Sucessful Rewriting: Viewing the Big Picture” by Sue Bradford Edwards; “Ten Tips for a Great Query Letter” by Lauren Barnholdt; The Newest Children’s Book Imprints” by Alicia Potter; “U.S. vs. U.K. Fiction” by Sara Grant; “Creating Books for the Youngest Reader” by Kelly Milner Halls (author interview); “The New Rules for Teen Lit” by Megan McCafferty;” “Mainstreaming the Graphic Novel” by Patricia Newman; and “Conquering Home Office Clutter” by Hope Vestergaard.

The head genius behind the guide is Alice Pope. Visit Alice’s CWIM Blog: Not-Quite-Daily News and Musings from the Editor of the Children’s Writer’s & Illustrator’s Market.